Home / Commentary / Can “We are Halluci Nation” Offer us a Decolonial Future?

Can “We are Halluci Nation” Offer us a Decolonial Future? 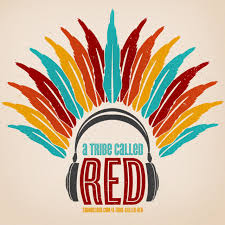 I was introduced to the work of the Indigenous Canadian DJ collective A Tribe Called Red this past summer. As a long-time Ottawa resident, I had already heard the name of the group due to their Ottawa roots, but had never actually heard their music. After listening to the first few tracks from their album, We are Halluci Nation (2016), I quickly realized the value of the album went far beyond its musical excellence.

A Tribe Called Red has produced an album with subject matter that is as culturally and politically relevant as that which can be found in textbooks and newspapers. Drawing on themes pertaining to colonialism and Indigeneity, while offering an alternate conceptualization of the binary of “Us” and “Other”, the album connects directly to the material I’ve learned in university courses. After listening to the album in its entirety dozens of times, I have come to recognize We are Halluci Nation as a testament to not only the political power and potential of music as a form of soft power, but the value that comes from making space in media for Indigenous artists to share their perspectives and expand public knowledge on salient topics, such as decolonization, reconciliation, and Indigenous identity.

Pop culture platforms and entertainment media are powerful vehicles for disseminating culturally and politically significant messages. Through an electronic/hip hop format, the album We are Halluci Nation offers representation of Indigenous and colonized bodies from the perspective of Indigenous artists which is, above all else, what gives the album such value. Drawing on Y. Jiwani’s (2010) understanding of “hard power” as factual news and “soft power” as entertaining news, I consider the album We are Halluci Nation as a form of soft power. However, while Jiwani (2010) points to the credibility and legitimacy that hard power media are laced with, she equally emphasizes that it is not to say that soft power media “always convey benign representations” (p.74).

Daniel Heath-Justice, an esteemed academic of the Cherokee Nation, further exemplifies the impact of soft power media in his interview with scholar Sam McKegney (2014), discussing how his understanding of Indigenous identity and more specifically his own identity as Indigenous, was not from his social surroundings but his internalized “anti-Indian stigma” that came from popular culture. In Heath-Justice’s case, it was not the political structures or the hard power news which influenced how he understood and experienced his Indigenous identity, but it was the soft power of popular culture that had the most impact. Both Jiwani and Heath-Justice’s perspectives highlight the validity of using soft power media as a platform for politically significant discussions, like A Tribe Called Red has done with We are Halluci Nation. The importance of these soft power outlets is even more salient when hard power outlets are not accessible for certain groups, which is largely still the case for Indigenous nations.

My ability to recognize significant contribution of the We are Halluci Nation is largely due to the knowledge I have gained through my coursework. In particular, the themes of the album remind me of content covered in Decolonization is for Everyone: Identity Formation in the Canadian Context, one of Carleton’s Collaborative Indigenous Learning Bundles. The Collaborative Indigenous Learning Bundles were produced by Dr. Horn-Miller, Carleton’s Education Development Center and a variety of other Indigenous collaborators in response to the call for action made by The Truth and Reconciliation Commission of Canada’s to address systemic racism through “increasing the integration of Indigenous knowledge” in post-secondary classrooms (EDC, 2018). The album draws parallels to themes brought up in Decolonization is for Everyone in the way it challenges the conceptualization of identity based on the categories created to sustain colonial power structures. As Damien Lee, one of the collaborators for Carleton’s Indigenous Learning Bundles, states, at the heart of the settler colonial project is the land and overall goal of replacing Indigenous peoples with the settler nation (Carleton EDC, 2018). The settler colonial project therefore depends on the conceptualization of bodies through the binary terms of “Us” and “Other”.

We are Halluci Nation pushes back against the colonial identity categories, which as Sam McKegney (2014) states, “domesticates difference and dilutes specificity” by essentializing Indigenous nations as one homogenous “Other”. The album instead offers an Indigenous perspective on defining identity and nationhood through behaviours and beliefs, rather than the essentialized identity categories.  The way in which A Tribe Called Red conceptualizes a decolonized identity runs parallel to the knowledge shared in the learning bundle Decolonization is for Everyone regarding identity formation for Anishinaabe peoples (Carleton EDC, 2018). The learning bundle references Anishinaabe scholar Dr. Jill Doerfler who states that for the Anishinaabe nation, identity formation is fluid and based on behaviour rather than strictly on race, blood quantum, and gender like the colonial project reinforces. This conceptualization of identity presents itself in A Tribe Called Red’s track “ALie Nation”. The lyrics of the track juxtapose the identity of the “human beings” who see “the spiritual in the natural” and believe “everything is sacred” against the identity of “subjects and the citizens” who see all things natural as “energy to be exploited” and view “nothing as sacred, not even their self”. While the lyrics still produce the binary of “Us” and “Other”, the two national identities are conceptualized through their behaviours and beliefs rather than biopolitical race.

Beyond presenting an alternative conceptualization of national identity through behavior and beliefs, the most fundamental aspect of identity formation offered through We are Halluci Nation is the idea of humanity and human connection. The theme of humanity is woven in the lyrics throughout the album, for example “The Virus” (“The people”), “ALie Nation” (“The human beings”, “The people”) and “Halluci Nation” (“We are the human beings”). These lyrics remind me of a really powerful discussion that was had by John Trudell in the National Film Boards’s Reel Injun, where he points to the damage colonial identity categories have had on how Indigenous nations understand themselves. As Trudell states;

“We are starting not to recognize ourselves as human beings… We are trying to protect our identities as Indians or Native Americans but we are older than both concepts…we are the people, we are human” (NFB, 2009).

As Trudell exemplifies here, the construction of identity through the binary “Us” and “Other” based on the identity categories constructed through settler colonial logic not only impacts individual’s self-identity, but further distances us from recognizing both groups for their shared identity: human beings.

Drawing together Trudell’s above statement and the knowledge gained through Carleton’s Indigenous Collaborative Learning Bundles, I understand the DJ collective’s decision to omit the specificities of gender and race throughout the entirety of the album as evidence of the way their framework for a decolonial future reimagines national identity beyond colonial categories of difference and towards the recognition of our shared identity as humans. Noticing the absence of typical Western identity categories, such as gender and race, while listening to the album pushed me to rethink the suitability of a notion such as intersectionality in challenging colonial discourses or its use as an analytical framework when looking at pieces of media such as We are Halluci Nation. While K. Crenshaw’s (1989) intersectional framework is valuable in acknowledging the complexity and nuance of human experience, it does so by focusing on the way various identity categories (such as race and gender) intersect to create unique and compounded discrimination for people. Understanding that “race” and “gender” are by-products of colonialization and based on colonial understandings of human difference, would the use of intersectionality in pieces of media that attempt to reimagine a decolonial nation be reinforcing the importance placed on body categorization?

On the other hand, I also wonder whether abandoning an intersectional analysis would reinforce media representations of discrimination and subordination of Indigenous peoples as disadvantages “occurring along a single categorical axis” as Crenshaw states (1989, p.140). If media scholars disregard the use of an intersectional analysis for media texts like We are Halluci Nation, would that set a precedence for subsequent imaginings and frameworks of a decolonial future? Further, what would the implications of setting this precedence look like? Would reinforcing such conceptualizations of Indigenous discrimination along a “single categorical axis” in media eventually lead to the unraveling of the crucial work that organizations, such as Missing and Murdered Indigenous Women & Girls, have done to get more appropriate media attention and representation for the systemic violence against Indigenous women?

While I consider the above contemplation and hesitation as a necessary element of any discussion pertaining to a salient topic such as intersectionality, media representations and decolonization, I believe it is also vital to acknowledge my white identity and colonial heritage, and how this lessens the importance of my contribution to this discussion. A defining feature of what makes We are Halluci Nation an important piece of cultural media is that it comes from the perspectives of those within colonized nations, rather than about them from a colonial perspective. In this sense, while I believe it is important that a diversity of voices enter this discussion, authority should be given to the voices of those within Indigenous and colonized nations in order for us make progress in media representation. Making more space in media for a diversity of voices and representations can translate to larger social structures and make more space for these voices outside of just pop culture.

Crenshaw, K. (1989) Demarginalizing the intersection between race and sex: A black feminist critique of anti-discrimination doctrine, feminist theory and anti-racist policies. In The University of Chicago Legal Forum 1989: Feminism in the Law, Theory, Practice Criticism. Pp. 139- 167.

McKegney, S (2014). Into the Full Grace of the Blood in Men: An Intro. Masculindians: Conversations about Indigenous Manhood. Winnipeg: University of Manitoba Press, pp.1-11 Retrieved from https://ebookcentral-proquest-com.proxy.library.carleton.ca/lib/oculcarleton-ebooks/detail.action?docID=4828061