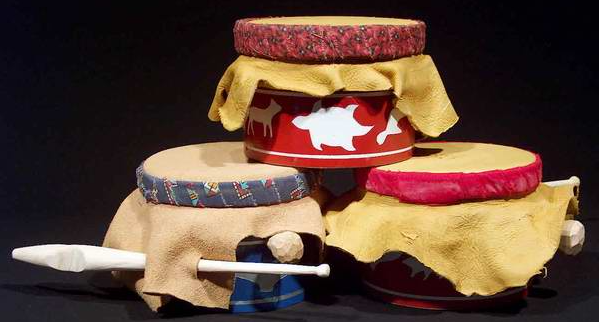 “Our songs and our dances carry our people through these changing times and remind us all of the true meaning behind being an Onkwehon:we (Original Human Being). Singing and Dancing is a medicine and is one of the many forms of expressing our thankfulness for all of creation, which is the basis of our ways of life. We acknowledge the long line of people who still today continue to carry on our traditions and ways of life, so that it may pass on to the next seven generations.”  — Corey (Shatekaronhioton) Fox, Donovan Thompson (Tehoniehtaronweh) and Tina Square (Karahkwino), 2017.

The Native North American Travelling College (NNATC) is a community-based educational institution based in the Haudenosaunee (Kanien’kehá:ka / Mohawk) community of Akwesasne, which straddles the Canada-US border and the provincial/state boundaries of New York, Ontario and Quebec. The work of the College began in 1969, when its founder, Ernie (Kaientaronkwaken:ha) Benedict, loaded his VW van with musical instruments, traditional clothing, books and cultural artifacts of his community of Akwesasne and hit the road with the goal of educating neighbouring non-Native individuals, communities and educational institutions about traditional Kanien’kehá:ka culture and lifeways. Ernie’s vision, and that of those who followed in his footsteps, was to teach about contemporary Mohawk culture in order to bolster pride in community members while also fostering a better understanding of Mohawk people within the local non-Native population to counteract racist stereotypes. As part of its programming, the NNATC hosts traditional teaching sessions and cultural workshops, an annual children’s powwow, and Friendship Days; additionally, a travelling troupe of musicians and cultural educators, mostly led by young people, travel outside of the community to share and teach about Mohawk knowledge and expressive culture. Since its inception, the Native North American Travelling College has grown to include a roster of over 300 employees and cultural educators who continue to fulfil the vision of its founder, responding to shifting political, cultural and social contexts around them and within their community.

Music and dance are integral to the work of the travelling troupe, as they regularly teach Kanien’kehá:ka social songs and dances as a means of bridge building and cultural awareness. Over the course of its history, the NNATC has created an archive of their workshops and presentations, and they continue to offer culturally-relevant training to local schools, businesses, and community associations. Complementing this hands-on work of the College is their wide range of publications on traditional teachings, social song and dance, lacrosse, and other culturally meaningful topics (e.g., Mitchell 1984/2017, Fox et. al 2017, Porter 1983).

This project examines the mandate, activities and personnel involved with the NNATC programming over its 50-year history to illustrate the role that the music and dance workshops have in promoting community pride and a non-native awareness of and in Kanien’kehá:ka culture.

Based on collaborative research with current and past staff and travelling troupe members, this project explores the music and dance selections of the travelling troupe, the teachings associated with those selections, and it argues that this programming reinforces the mandate of the College in teaching about, celebrating and revitalizing Kanien’kehá:ka traditional knowledge and culture. This research seeks to demonstrate the “purposeful action orientation of Indigenous tradition” (Diamond 2019, 240), examining the ways in which traditional Mohawk social song and dance encompass and reinforce the principles guiding Haudenosaunee sovereignty, world view, and governance. Examining the history and programming of the NNATC will demonstrate how their work is not only a response to settler colonialism but also serves for community-focused retention and reinforcement of Kanien’kehá:ka culture and identity.

This proposed project responds to Dylan Robinson’s call for scholarship to “go beyond merely describing the contemporary aesthetics of Indigenous cultural practices and question when and how ontologies of Indigenous song continue to be articulated, renegotiated, and transformed in contemporary artistic media.” Indigenous artistic practices are often intended to serve purposes beyond aesthetic pleasure and entertainment (Levine 2019, 10), and as Robinson argues, “to study Indigenous ontologies of expressive practice is to study how those practices and their components (oration, regalia, dance, song, ceremony, storytelling) serve functional purposes other than the equivalent Western forms of artistic expression” (2019, 223). Examining the “purposefulness” of the programming of the travelling troupe of the NNATC will reveal deeper intentions and self-representations of Kanien’kehá:ka musicians and cultural educators, the dances’ and songs’ relationship to traditional governance practices, and the intergenerational transmission and valuing of culture.