The North Atlantic Treaty Organization (NATO) connects the two sides of the Atlantic Ocean by providing Canada, the United States, and Europe with a common defence framework. In the field of defence and security, the burden-sharing problem of distributing the cost of collective defence – and what a fair share among member states should look like – can become a complex issue. NATO is not excepted from equity controversies. The central goal of this paper is to understand a specific part of the transatlantic burden-sharing story: Canada’s decision to contribute to NATO and its position during the first debates on burden-sharing in the alliance. This paper argues that Canadian contribution strategies can be best understood by looking at the geopolitics of the middle power on the one hand, and the concepts of fair-share and burden on the other. It shows that burden-sharing is not a mere technicality, but instead is filled with interpretative gaps. By looking at the normative level, the paper explores why burden-sharing became an issue in the first place and elaborates on the politics of burden-sharing from the Canadian point of view. 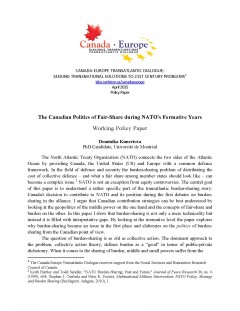