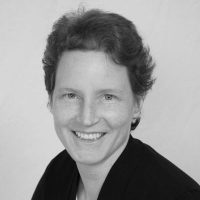 Susan Downie, Assistant Professor of Greek and Roman Studies, completed her B.A. in Classical Studies and History at the University of Waterloo before moving to the University of Toronto for her M.A. and Ph.D. Her Graduate Studies included work in both Greek and Latin language, in addition to art historical and archaeological training. She excavated at the Minoan harbour site of Kommos, Crete, and participated in several study tours of Greece, lecturing on architecture, sanctuaries and religion from the Bronze Age to late Classical periods. Her area of academic expertise is Greek history (both political and social) from the Late Bronze Age to the fifth century BC. Downie’s doctoral thesis (2004) examined the uses of hero cult for political propaganda at the Panhellenic sanctuaries of Delphi and Olympia, and her current research continues to focus on the interaction of politics and religion in the Archaic and Classical Greek world.