An Interview with Dr. Brenda Vellino 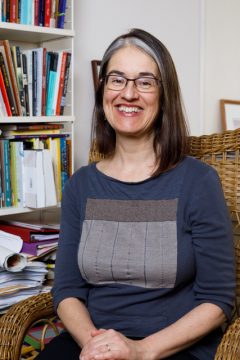 Brenda Vellino is an associate professor in the department of English Language and Literature at Carleton who has been involved with the Carleton Climate Commons group for many years. I sat down with her to get a sense of how she situates her research and teaching in relation to climate change.

In our conversation, Brenda walked me through the narrative of her work as it’s evolved over the years. She started with an interest in human rights humanities scholarship where she was particularly drawn to the later writings of Adrienne Rich on accountable citizenship. Eventually, Rich’s ideas pushed Brenda to consider what these issues looked like in the Canadian context, which led her to Indigenous writers and knowledge keepers. Her work today is guided by the question of how to live responsibly according to treaty and territorial relationships as understood by indigenous peoples.

One figure whom Brenda sees as a mentor in engaging with this question is Coast Salish based poet and water justice worker, Rita Wong. Working with and responding to Wong’s work on water and waterways has pushed Brenda into thinking about what she called “the porosity of the self” and relational conceptions of intersubjectivity in Indigenous teachings. Her current research aims to take up some of Wong’s work in beholden and undercurrent as a kind of guide for a project investigating the relations and communities along the Kitchissippi Kichi Zibi watershed.

She described the evolution of her work as continually picking up the strands of past projects and pulling them through into new interests and contexts. Recently, she was able to bring these strands together to teach her dream course last fall, called Literary Ecological Fieldwork. This class cut down on assigned readings and asked students to spend time each week outside. They kept fieldwork journals to record their observations and reflections in a given space, while each week the course reading materials focused on paying attention to a specific aspect of the world – sometimes it was the trees of their neighbourhood, sometimes wild bee populations. The course tied into Brenda’s love of interdisciplinary thinking and brought Indigenous knowledge keepers, scientists and literary artists into conversation with one another. Many of these conversations happened in the classroom space itself, through a range of guest speakers who appeared throughout the term—including, at the invitation of her students, Rita Wong.

Brenda designed this course with the experimental premise that, “if you invite students to become more engaged with the … multi-storied minutia of where they live, … their sense of relational responsibility, which ties into relational responsibilities on treaty terms—to the where they live—would then … provide an anchor to the bigger questions of climate change which can still seem remote.”

Much of climate change education is focused on pushing students to think systemically rather than individually about what’s happening to our planet, but Brenda feels that this artificial binary is harmful to both her students and the topic at hand. Intervening in climate change requires both perspectives, but “criticality,” as the sole lens, she told me, “privileges the rational. It doesn’t engage with the spiritual, emotional, [or] physical.” In response, her teaching focuses on embodied learning. The students in her class last fall commented on the mental health benefits of being asked to spend time outside every week, just being present and paying attention to the world around them. This is a part of a decolonial, indigenous pedagogy that requires us to engage with whole persons. Brenda explained that “in Indigenous conceptions of personhood, a person is never individual, solely, it’s [all about] relation.” This was what made her class last fall so special, because “so much of [their] learning was about the relational construction of living entities, which we are part of as biological beings.” 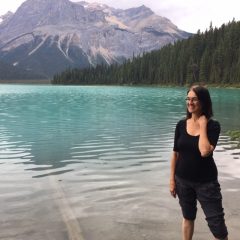 When I asked Brenda what she felt was most effective way of reaching people regarding climate action, she told me that this work is “incremental” and that the small conversations in classrooms really matter. Whether it be discussions about climate change or Indigenous issues, she’s found that students take these conversations from class and bring them back to their families, their roommates, and the people in their lives in a kind of co-education effect. “I still believe that educational settings have a great capacity to create critical sensibility and engagement on the part, not only of the students in our classrooms, but potentially, gradually, a broader public.”

Brenda is currently accepting students for supervisory projects and hopes to have the chance to teach her Literary Ecological Fieldwork course again soon.