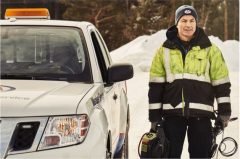 Abstract: The core mission of CAA is to rescue stranded motorists and save lives. Protecting over 2.6 million Members, between 3,200 and 5,500 rescues are conducted each day. In order to maximize a finite set of rescue resources, CAA uses machine-learning algorithms to predict the precise location of motorist breakdowns. By knowing when and where breakdowns will occur, CAA is able to pre-position rescue vehicles at the right location at the right time to rescue the motorist. This lecture will provide an overview of the technology that CAA developed called Geo-Temporal Gen 2. It will also include a discussion of the mathematical and probability models that power the machine-learning algorithms. Accompanied by a live view into Geo-Temporal Gen 2, you will see mathematical and probability theory put into real-life action and witness the accuracy of the predictive models that are generated by Geo-Temporal Gen 2 to save lives on our nation’s roadways.

Lena holds a Bachelor’s of Science degree from the University of Toronto in Computer Science and Mathematics. During her years in University, she interned at IBM within the Centre for Advanced Studies (CAS), where she worked on front-end web development, mobile prototype development, and conducted research on innovative solutions for e-commerce platforms. In 2012, Lena joined CAA as a Technical Support Specialist focused on supporting mobile technologies and dispatch systems. She then worked as a Business Analyst in IT for the implementation of a new dispatch system before being promoted to Manager of Emergency Roadside Systems. Lena’s continued innovative leadership and proven results led Lena to her current role of Director.

Jay began his career as a structural risk engineer and fire inspector specializing in industrial risks. Using this field experience, he then moved into the property and casualty technology area where he led the development of advanced predictive risk-based actuarial and underwriting systems, and more recently, machine-learning neural algorithms and learning patterns. Jay is a graduate of Carleton University in Psychology, the University of British Columbia in Forensic Science, the University of Toronto in Risk Management, and Embry-Riddle Aeronautical University in Aeronautics. Fluent in three languages, Jay also serves as a volunteer medical pilot on the weekends and was short-listed as a NASA Astronaut Candidate in 2016.