As the pun indicates, “Research Talks” is a series of lectures on the work that English Faculty and Graduate Students are doing and an opportunity for the department’s research to speak and to be heard in the community. “Talks” also registers the informality of the occasion, where speakers can test mock presentations and entertain hypotheses with colleagues before taking them to a conference or submitting them for publication. 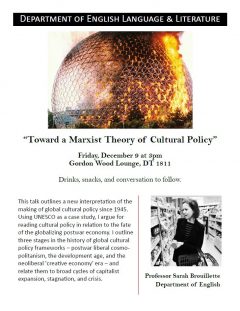 This talk outlines a new interpretation of the making of a global cultural policy since 1945. Using UNESCO as a case study, I argue for reading cultural policy in relation to the fate of the globalizing postwar economy. I outline three stages in the history of global cultural policy frameworks – postwar liberal cosmopolitanism, the development of age, and the neoliberal ‘creative economy’ era – and relate them to broad cycles of capitalist expansion, stagnation, and crisis.

“The stuff they put in the old readers’: Remembered and Recited Poetry in the Stories of Alice Munro” 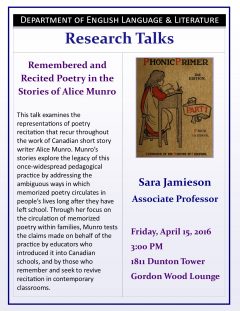 This talk examines the representations of poetry recitation that recur throughout the work of Canadian short story writer Alice Munro. Munro’s stories explore the legacy of this once-widespread pedagogical practice by addressing the ambiguous ways in which memorized poetry circulates in people’s lives long after they have left school. Through her focus on the circulation of memorized poetry within families, Munro tests the claims made on behalf of the practice by educators who introduced it into Canadian schools, and by those who remember and seek to revive recitation in contemporary classrooms.

Katherine Parr and the Pleasures of Archival Research For centuries, Tudor historians and literary scholars have assumed that the influential Anglican Prayer Book was composed entirely by senior male clergymen. In this talk I will show that the political “Prayer for the Queen’s Majesty” still used today was actually produced by Queen Katherine Parr for Henry VIII in 1544, and was put into the English Prayer Book by Queen Elizabeth I in 1558. As I outline the “facts” in this surprising historical narrative, I will draw attention to the challenges and joys of sleuthing in the archival records of Tudor England. Métis politics provides a fantastic window to better understand Indigenous political movements. In the case of the Métis, it reveals at least two political ontologies. On the one hand, we find a political ontology influenced by binary classic nationhood criteria, requesting the “birth” of a “New People” grounded in what is conceived as an exclusionary delineated space: the “Métis Historic Homeland.” On the other hand, we see a more flexible and relational approach to Métis “peoplehood” that operates on the basis of a more relational, pragmatic and multi-centered approach to Métis identity. What does the Monument to the Victims of Communism have to do with the controlled admittance of residential schooling into a public narrative of Canadian history? This paper argues that the subjectification of residential school survivors is joined to the production of a ‘state-phobic’ social imaginary in the current moment. The work of a major theorist of indigenous resurgence, the Anishinabe writer and activist, Leanne Simpson, may be read as an intervention in this context.

Sarah Phillips Casteel, “Blacks and Jews: The Other 1492 and the Holocaust in the Caribbean Literary Imagination” Caribbean writers regularly invoke two traumatic moments of Jewish historical experience: the Sephardic expulsions of the 1490s and the Holocaust. This talk argues that Caribbean literary treatments of Jewishness cannot be interpreted through the lens of Black-Jewish relations in the U.S. and especially not through a paradigm of “competitive memory.” Instead, they need to be contextualized with reference to the distinctive histories of contact and entanglement between Black and Jewish diaspora cultures in the Atlantic world.

Travis DeCook, “The Secular Bible: Disenchantment at the Intersection of Theology and Media Theory” Media theorists from Marshall McLuhan to Eugene Thacker have addressed the relationship between ideas about media and enchantment, the world’s permeability to the supernatural. This talk explores the intersections between this concern and a persistent tendency in theology to associate the Bible’s transition into early modernity with disenchantment. It offers a critique of this tendency and its assumptions about media, and in doing so raises complications for contemporary thinking about secularity. entation examines his use of history and metaphor to demonstrate how contemporary postcolonial imagery is communicated through tropes that set conditions for future action. Linking histories of colonial domination with contemporary conditions of violence in Africa, narrative forms of encapsulation are mobilized to produce fetish-like histories that are difficult to contest in the postcolonial African context. The paper demonstrates how such cultural forms are used to produce imperatives that respond to colonialism, domination, and subjugation and that allow for the reinscription of the present in morally coherent ways.