Visiting three museums in one week…

An especially exciting part about getting my Canadian citizenship is the free access I get to museums and art galleries for a year. I fully made use of this access over the winter break, during which I visited three museums in a week.

The Ontario Science Centre: Science museums are usually the best museums to visit because everything is so hands-on. The Ontario Science Centre takes the prize for best science museum visited so far (sorry, Ottawa). Even my thirteen-year-old sister, who is at that point where her room is the best possible place she can be, thoroughly enjoyed herself.

The exhibits at the museum had lots of games to demonstrate the science. To explain the Schrodinger’s Cat theory, there was a version of the game “Angry Birds.” Instead of launching birds, you launch cats. Each level applied quantum theories to how you could launch the cat. In one level, for example, you launch a cat in a box. While the box is in the air, you tap it, and the cat may come out either dead or alive.

A much-appreciated exhibit in the cold December weather was in “The Living Earth” section. You enter a space that simulates a rainforest, complete with heat and humidity! But one of the highlights is a whimsical display of sculptures made out of found objects. Each sculpture has a wacky name, like “Flying Tea Machine.”

The Aga Khan Museum: This museum opened a few weeks after I moved to Canada, and has been on my go-to list ever since. The free entry was enough to convince my mum to drive me out there.

I felt a sense of familiarity in the Aga Khan Museum. I remembered names like Mahmud of Ghazni, Muhammad bin Qasim, and Avicenna from my history classes in Pakistan. The stunning calligraphy showed how different Arabic scripts developed, including Persian, which influenced Urdu, Pakistan’s national language. Another point of resonance was the Shia and Sufi influences in the calligraphy. My family’s sect of Islam is under Shi’ism, and I’ve never seen the branch in this sort of spotlight before (given that Pakistan has a Sunni majority).

The Aga Khan Museum was an especially cool place to visit because I was seeing things that I had only seen in textbooks on display. One of these artifacts was a standard used in a battle in Islamic history. I had memorized that Hazrat Ali (nephew of the Prophet Muhammad) was renowned for his strength, and his service as standard-bearer was proof of it. I pictured the standard as a lightweight flag, and never questioned why one would need strength to carry one. The standard in the Aga Khan Museum was like a metal sculpture, with intricate calligraphy carved into it.

Almost two months after visiting the Aga Khan Museum, I still can’t forget the awe and wonder of the exhibits I experienced there. The visit has inspired me to start a project involving a study of the Mughals. 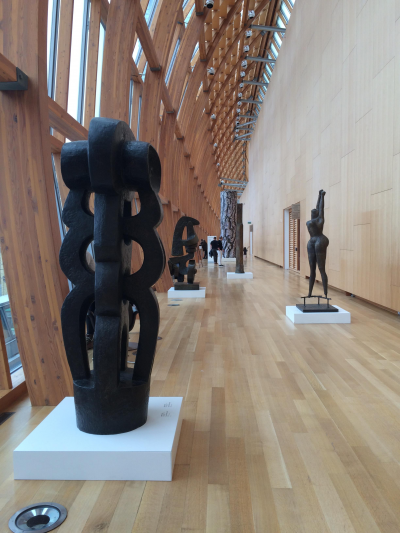 The Art Gallery of Ontario: The AGO was the last museum/gallery I visited. I’ve been here before, but the architecture of the place always makes me marvel at its beauty. The gallery’s special exhibition showcases the work of Mickalene Thomas.

Thomas’s paintings include different types of materials. She embeds rhinestones in a lot of her work, making it very striking. The exhibit, titled ‘Femmes noires,’ puts black women in the spotlight.

In Thomas’s “living-room installations,” she arranged couches and piles of books by black authors. I recognized a number of names from classes, including Nervous Conditions by Tsitsi Dangarembga, A Small Place by Jamaica Kincaid, and Washington Black by Esi Edugyan.

This exhibit was a great way to invite people to sit down and absorb the installations while also giving them something to do in the form of reading the books. The common “Do Not Touch” rule in art galleries can also create tentativeness in visitors. Turning this on its head by encouraging people to “touch the artwork” made this a very comfortable space to explore.

These museums are all larger-than-life, and the time needed to go through each one thoroughly surpassed the energy I had each day. I’m still thinking about the exhibits at each museum, and they continue to influence my literary and artistic work.