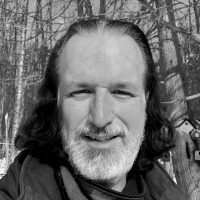 D.S. Stymeist’s debut collection, The Bone Weir, was published by Frontenac Press and was a finalist for the Canadian Author’s Association Award for Poetry. His next collection, Cluster Flux, will appear in 2023 also with Frontenac. He continues to publish widely in both academic and literary magazines including Canadian Literature, The Antigonish Review, Prairie Fire, and The Fiddlehead. Alongside fending off Crohn’s disease, he teaches creative writing, crime fiction, and Renaissance literature at Carleton University. He grew up as a non-indigenous member of a mixed heritage family on O-Pipon-Na-Piwin Cree Nation; these formative cultural experiences continue to guide and shape his identity. As former president of VERSe Ottawa, he helped organize VERSeFest, Ottawa’s international poetry festival as well as manage the city of Ottawa’s Poet Laureate program.