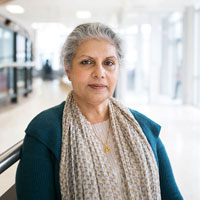 Mohandas Karamchand Gandhi when asked what he thought about western civilization famously replied that he thought it would be a good idea. Behind the humour was the very serious view that colonialism was the place in which western civilization, along with its claims of ethical government, was specified. Colonial discourse analysis has attempted to understand the phenomenon of European colonialism in all its complexities, stretching from colonial rule’s dependence on brute force to its economic base and psychological devastation. It has also attempted to understand the specific forms colonialism took in the non-European and outer-European geographies of the eighteenth and nineteenth centuries. My research is situated within the general principles outlined here and focuses on British India. I am interested in considering the attempt of the subjugated to think their way out of the hegemony that, arguably, prevailed and enabled the continuity of colonial rule (as it was routinely described in Indian public culture), and simply their daily negotiation of ‘foreign’ rule (as it was described after 1857 in particular), as I am in considering the partial, some would argue only formal, instantiation of liberal government in the colony. This, in brief, is my current project and the interaction on which it focuses is that of the multi-lingual, multi-regional periodical press of 1870-1910 and colonial law.

You could say that the intellectual project, of colonial discourse analysis, has been one of writing into history the many peoples that were dispossessed by the modern phenomenon of colonialism. This best describes why I work in the field I do. The questions with which scholars of British India have grappled, and continue to grapple, are as much a part of the field of enquiry as are the many fine studies detailing the history of education, law, science, the press, the bureaucracy, economic policy, and social reform (particularly important in the case of India, as government drastically restructured society through a series of acts—outlawing sati, child marriage, and so on), and, of course, the Indian freedom movement itself with its own complicated history. The questions are inevitable as relatively little remains of recorded opinion, outside of elite opinion, except in government archives. My own research, which has focussed on the Indian struggle, is critically concerned with the issue of representation since it is based, primarily, in (government) archival material, which in turn has meant engaging with the long history of debate over the function of imperial archives and the viability of reading against the grain of government intent. In a previous work, Bearing Witness, my attempt was to consider the meaning the traumatic end of colonial rule in India had for those who survived the partition in the Punjab, the intelligentsia that participated in giving the nationalist movement its distinctive shape, and the last generation of British in India. It was while working on this project that I got interested in what is sometimes described in Subaltern historiography as the ‘small voice of history.’ In my current work, I explore another overlooked arena, this time for the formation of mass public opinion—the extensive reading audience that the periodical press of Victorian India is known to have had. It was an opinion that concerned government keenly, which attempted, repeatedly, to suppress it. The history of a politically mobilized press is, thus, also the history of its attempted suppression and is the subject of the book on which I am, at present, working.

“The Vox Populi, or the Infernal Propaganda Machine, and Juridical Force in British India.” Cultural Critique 72 (2009).

“Giving the City a Miss?: Propaganda Text of the Indian Freedom Movement and its Exclusions.” Journal of Commonwealth and Postcolonial Studies 12.2 (2005): 1-36.

October 2009. “Figuring the Indian Political Body in Law: A Reading of the History and Language of Section 124A of the Indian Penal Code (1870).” At Making Britain, London.

October 2007. “The Force of Law and the Outlawing of Patriotism in Colonial India.” At Annual Conference on South Asia, University of Wisconsin-Madison.

July 2007. “The Infernal Propaganda Machine of 1907-1910 and the Making of the Nationalist Public Sphere.” At Rerouting the Postcolonial Conference, University of Northampton.

ENGL 5004: Literature, Contact, and Empire in Colonial and Post-Colonial Societies