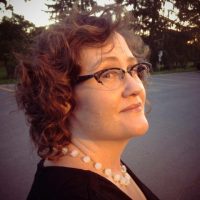 I have two major projects underway. First, I am finishing a monograph entitled The Litany of the Saints and the Taxonomy of Sanctity in Early Medieval England. The litany of the saints was a form of prayer the became a touchstone of early medieval English culture. Throughout the period, authors and artists employed the litanic hierarchy and its terminology to classify the saints and to conceptualize their various modes of sanctity. This was no mere commonplace but a habit of mind shared by all who prayed to the saints. When an early medieval Christians thought of the saints in heaven, what s/he envisioned was the litanic hierarchy. To answer questions about the saints – different types, what to call them, their relative prestige – it was to the litany that they turned. Yet very little work has been done on the early medieval litany of the saints. My work focuses on the framework shared by all these prayers and the cultural work this structure performs in early medieval England. For example, why are all female saints – regardless of their historical context, manner of death, or physiology – categorized as virgins? And why is the Virgin Mary deliberately separated from them within the litanic hierarchy?

Second, I am working with Johanna Kramer (University of Missouri) and Hugh Magennis (Queen’s University Belfast) to edit and translate twenty-two texts for Anonymous Old English Saints’ Lives, to be published by Harvard University Press for Dumbarton Oaks Medieval Library. At the time of our volume’s publication, the standard editions of nine of these texts will be 100 years old. For six of these texts, ours will be the first edition in English. For twelve of these texts, ours will be the first published translation. Moreover, the fact that these texts exist in 15 different editions proves a logistical barrier for anyone who wishes to peruse the corpus as a whole. It is no surprise, therefore, that these texts have largely been read in isolation, when they have been read at all. Yet putting these lives in dialogue gives us new perspectives on hagiography as a corpus. For example, the various subgenres of saints’ lives become apparent, revealing that saints who die of natural causes are usually accompanied by mourning men.

Entries on Mildred, Petronella, and Theophista for A Florilegium of Anglo-Saxon Women, ed. Emily

Renee Trilling. A volume of sixteen essays under consideration with ACMRS.

The Litany of the Saints and the Early Medieval Taxonomy of Sanctity. Monograph in progress.

Essays on Intimacy. In press.

“Another Angle on the Old English Life of Saint Machutus,” International Congress on Medieval

“Interlace in the Hagiographic Archive,” Seafaring: An Early Medieval Conference on the Islands

of the North Atlantic, University of Denver, November 2016.

I welcome enquiries from students who may be interested in working with me, especially on a Masters Research Project or MA thesis.