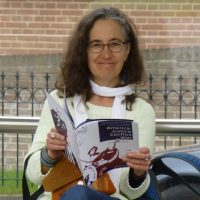 My research, writing, and teaching have focused on nineteenth- and twentieth century U.S. culture, with an emphasis on cultural responses to the problem of war. Before arriving at Carleton in 2006, I worked as an assistant professor in Yale University’s departments of English and American Studies (1992-97), and as an assistant and associate professor in the University of Virginia’s department of English and program in American Studies (1997-2006). While in Virginia, I wrote my first book, John Brown’s Body: Slavery, Violence, and the Culture of War (University of North Carolina Press, 2004), which examines representations of dead soldiers during the U.S. Civil War in light of a history of racial violence inflicted on free and enslaved African Americans during the antebellum period.

Since arriving at Carleton in 2006, my work has focused on U.S. culture after 1945 with an emphasis on radical documentary and war resistance in the context of American military expansion. With Joseph Entin and Sara Blair, I have edited a volume of essays entitled Remaking Reality: U.S. Documentary Culture After 1945 (https://www.uncpress.org/book/9781469638690/remaking-reality/).  Examining a wide range of forms and media, including sound recording, narrative journalism, drawing, photography, film, and video, Remaking Reality explores the flourishing of documentary activism in the contemporary period, and argues that after 1945 documentarians reconceived “reality” as the site of political conflict, and documentation as instrumental to anti-institutional struggles for justice and survival. I recently published a book on sleep and U.S. militarism, Fighting Sleep: The War for the Mind and the US Military (Verso Books, 2019), that considers experiments in sleep, conducted between 1945 and the present, that have shaped, and reshaped, our understanding of war and its effects on the mind. Fighting Sleep examines the work of military psychiatrists who, in the immediate aftermath of WWII, used drug-induced sleep to heal traumatized veterans and to pioneer the techniques of brainwashing, and the activism of the Vietnam Veterans Against the War, who politicized sleep states in the service of war resistance, and turned sleep into a form of direct action. Recent published essays on the subject of war and documentary include “‘Marked for Demolition’: Mary McCarthy’s Vietnam Journalism,” American Literature (June 2013), “Against Photography: Susan Sontag’s Vietnam,” Photography and Culture (Winter 2014), “New Soldiers and Empty Boys: Imaging Traumatic Memory,” Visual Studies 30 (June 2015).

Fighting Sleep: The War for the Mind and the US Military (Verso Books, 2019)
https://www.versobooks.com/books/3081-fighting-sleep

“Take Me to the River,” Review Essay on Katherine Boo’s Behind the Beautiful Forevers and Rana Dasgupta’s Capital, Contemporary Literature (Spring 2015): 181-190

Review of Caroline Levander’s Voices of the Nation: Women and Public Speech in Nineteenth-Century Literature and Culture, American Literature (September 1999)

“‘Emblem and Product of Sin’: The Poisoned Child in The Scarlet Letter and Domestic Advice Literature,” The Yale Journal of Criticism 10 (Spring 1997)

“Beyond the Talking Cure: Listening to Female Testimony on The Oprah Winfrey Show,” in Inventing the Psychological: Toward a History of Emotional Life in America, eds. Joel Pfister and Nancy Schnog (Yale University Press, 1997): 297-315

Developed and taught online seminar for high school teachers on the roots of the 1960’s counterculture, sponsored by the National Center for the Humanities
(http://americainclass.org/seminars/flvs/the-roots-of-the-1960s-counter-culture/)

“Sleeping Soldiers: Experiments in Militarism and Resistance,” Keynote Address, delivered at Militarism, Security, and the Use of Force in U.S. History, Annual Conference of Historians, German American Studies Association, February 21-23, 2014

“Sleeping Soldiers: Tim Hetherington RIP,” presented at the Association for the Study of the Arts of the Present, September 2016

Organizer and Presenter, Roundtable on Documentary Work in the US, 1945-1989, American Studies Association, October 2011