50 Years: Law and Legal Studies Celebrates the Past and the Future 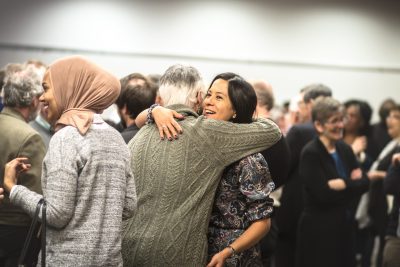 Scenes from the 50th anniversary celebration.

The recent celebration for the 50th anniversary of the Department of Law and Legal Studies attracted many luminaries, including Chief Justice Beverley McLachlin and Carleton University’s president, Roseann O’Reilly Runte.

But one could argue the true history of the department is embodied in faculty members like Lynn Campbell, who has been a professor of law (now emeritus) for 42 years.

“When I started, Carleton had 7200 students (now 30,000) and the president single-handedly ran the institution,” recalls Professor Emeritus Campbell, who served as Chair from 1980-84, when the Bachelor of Arts was introduced. “Faculty from all over campus would meet in the faculty club on the top floor of the Paterson Building for debates over lunch.”

Law courses were offered as early as 1946 at Carleton and eventually as part of a combined bachelor’s degree with political science, public administration or journalism. Professor Emeritus Campbell was Chair when the department was finally granted a stand-alone law degree.

“We were the first in the country to offer an introspection of law as an academic discipline, not as a professional degree,” he says. “There was a huge need to look at law from that perspective and my goodness, was there a market.”

The department continued to grow with the Master of Arts, Legal Studies being introduced in 1991 and the PhD in Legal Studies included in 2011. It’s now home to 1,300 undergraduates and 150 graduate students, making it the largest program of its kind in the country, if not North America. More than 12,000 Carleton students are enrolled in a law class this academic year.

“This speaks so much to the success of our mission: that law is not just for lawyers,” Department Chair Ronald Saunders said at the recent reception for the department’s 50th. “Law has an impact on all of us, and a strong understanding of the dynamics and politics of law makes us better policy-makers, better citizens and better leaders; it gives us a richer understanding of who we are and how we are governed, of our place and potential in society.”