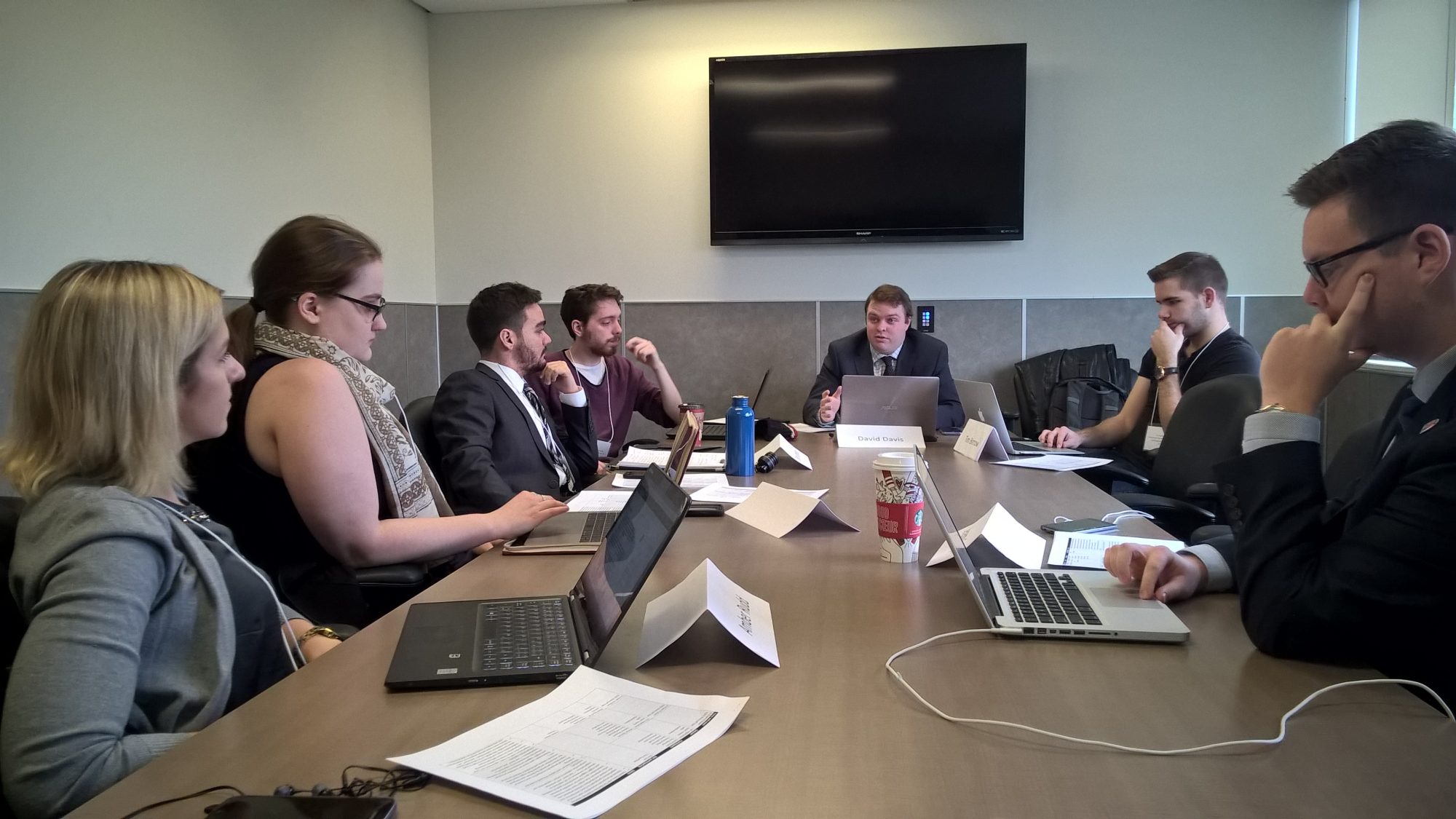 Students negotiate a Brexit deal in a mock debate.

Although the real-life Brexit negotiations look anything but fun, a group of master’s students in Carleton’s Political Science and European, Russian, and Eurasian Studies programs were clearly enjoying their Brexit simulation this semester.

The 17 students in Professor Achim Hurrelmann’s “Negotiating Brexit” class were given specific roles on the UK and EU sides of the negotiating table. They were then given two weeks to hammer out a deal both sides would be happy with.

Lucas Anderson, a student playing the role of the British foreign secretary Boris Johnson, said that when he heard about the European Integration Studies course, he knew he had to enroll.

“I immediately registered for the course because it sounded awesome,” Anderson said. “You see how complex the process is and how many things you have to take into account. I think reading it or listening to a lecture doesn’t quite give you the same context and the same experience.”

Students had to research the characters they were playing in order to make the simulation as realistic as possible.

“The main takeaway, as far as I can see, is the embodiment of characters you know nothing about personally and can’t relate to except by reading the newspaper,” said Douglas Ferguson, a student playing the role of British Brexit secretary David Davis. “Once you embody a character, you understand the pressures they’re under.”

This is not the first time Professor Hurrelmann has run a simulation like this: in 2013, he had students negotiate a solution to certain aspects of the Eurozone crisis. 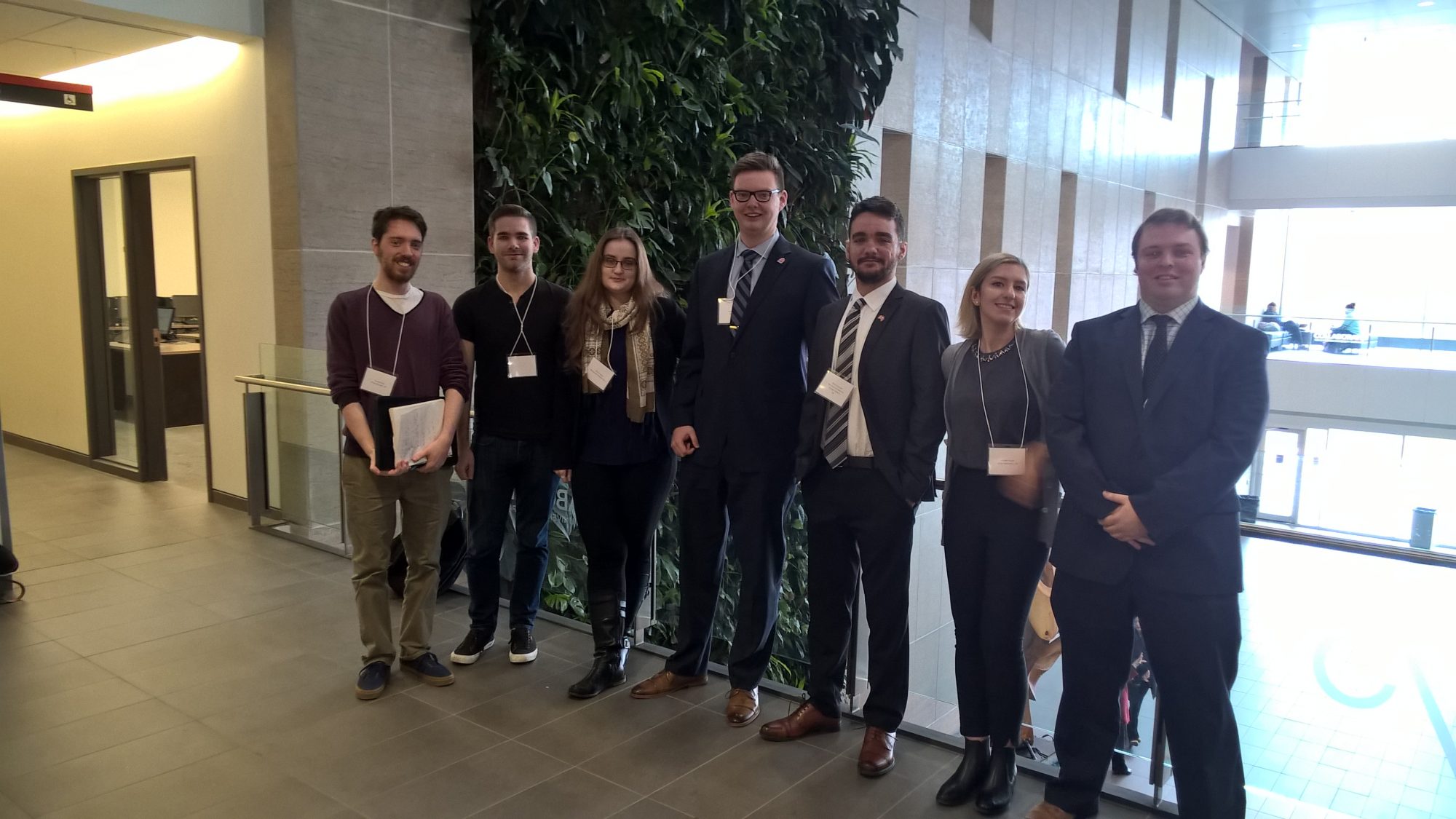 Students pose after a successful conclusion to the Brexit debate.

An Intense Day of Negotiating

Students arrived early on the day of the Brexit simulation to plot their strategies and secure their teams’ positions. They focused on three main areas of negotiation: citizens’ rights, the border between Ireland and Northern Ireland, and security policy cooperation.

Abigail Evans, who represented the Northern Irish politician Arlene Foster at the negotiating table, said the mix of personalities and political interests on the UK side of discussions made developing clear goals a challenge.

“There are so many different disagreeing parties and they’re all trying to come together on something they can’t even agree on,” she said.

Despite the challenges, the class eventually did reach an agreement. In the debriefing session held a week later, Professor Hurrelmann and his students agreed that the UK had gotten a better deal out of the simulated negotiations.

As part of the exercise, two students played the role of journalists covering the discussions to apply pressure on both teams.

Jarred Cohen, who acted as a reporter from the British tabloid The Sun, joked about how he tried to listen in on private meetings and pressure negotiators to get an inside scoop.

“You really get involved,” Cohen said laughing. “You really take initiative and people really took on their personas.”

Despite the pressure and challenges, every student in the class agreed that the simulation helped them learn how international diplomacy and deal making really works. They also found that the experience helped them become closer as a group.

“It sounds really corny, but I think it actually brought us all closer together,” said Angelo Bakoulas, a student playing the role of the European Parliament’s head Brexit negotiator, Guy Verhofstadt. “I think it’s actually going to affect the dynamic of the class going forward.”