The Jackson Family Scholarship in Community Engagement will be awarded to outstanding graduate students enrolled in the Master of Philanthropy and Nonprofit Leadership (MPNL) program, who demonstrate a strong potential for leadership and innovation in community engagement on high-priority issues to local nonprofits, governments and businesses. 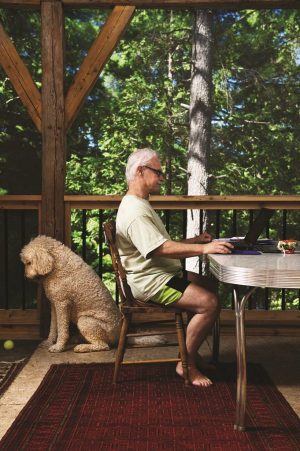 Ted Jackson at their cottage in Quebec, with timbers from his family’s Mapleview Farm pictured in the background.

“It’s a family tradition that has been integrated into our life here.” Ted Jackson took a moment to reflect on the structural beams that adorn the interior of their cottage in the Outaouais—one that was built and designed by his wife, Magda Seydegart. The thick timbers that now serve as the hallmark of the space once supported the 150-year-old working barn full of grain, equipment and cattle on the Jackson family’s Mapleview Farm in Kemptville.

In the 1940s, Ted Jackson’s grandparents, John McClintock Jackson and Isabella Dixon Jackson, co-founded a  dairy cooperative which was the catalyst for enabling local farmers in the Kemptville area to expand their milk sales into Montreal markets. This was the starting point in establishing the Jackson family’s role as community leaders—a legacy that continues to inspire Ted and Magda to contribute to our world in impactful ways. As Ted explains, “It has been fundamentally influential, and has informed all of the things I have done from teaching at Carleton to consulting internationally.”

Community engagement has been at the forefront of Ted and Magda’s lives for decades, and the pair recalled meeting for the first time in the ’70s working with a nonprofit organization dedicated to advancing Indigenous rights in Ontario’s north. Magda later served as Executive Director of the Human Rights Research and Education Centre in the Faculty of Law at the University of Ottawa and later as a trainer in human and women’s rights to Canada’s Department of Foreign Affairs and as a consultant to the Department of Justice and United Nations.

As an Associate Professor in the School of Public Policy and Administration from 1993-2014, with cross-appointments to the Norman Paterson School of International Affairs and Institute of African Studies, Ted has been deeply committed to enhancing community engagement and outreach at Carleton. This was reflected through his teaching, and in his roles as Associate Dean of Research in the Faculty of Public Affairs, co-founder of both the Carleton World Bank Program for Development Evaluation Training and the Carleton Centre for Community Innovation and as founding principal investigator for the Community First SSHRC project.

Across Eastern Ontario, other members of the Jackson family have exemplified this tradition, as well. In the 1970s, Anne Jackson, Ted’s mother and a Carleton graduate, founded a school in North Grenville for children with physical and intellectual disabilities and supported them into their adulthood with housing and social services. Ted’s sister, Betty Clost, co-chaired the 22,000-member volunteer organization, Our Trenton Memorial Hospital, which has worked to retain and renew local health services. Her husband, Dan Clost, designed and taught a field-based apprenticeship course for Landscape Ontario. And their daughter, Ellyn Lambert, recently led a community-based research process with non-profit Pathways to Education Kingston, local school boards and Queen’s University on the changing educational needs of students in low-income neighbourhoods. 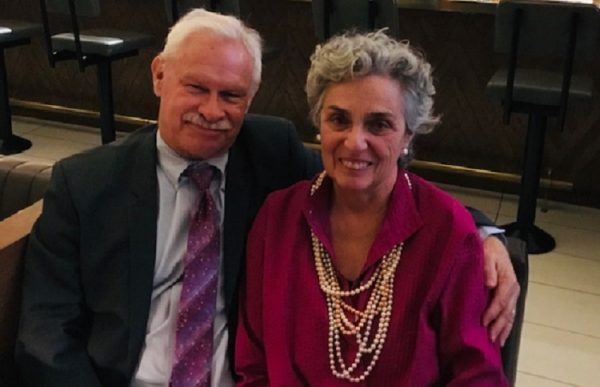 Magda and Ted have dedicated their personal and professional lives to giving back, which led them to establish the Jackson Scholarship in Community Engagement here at Carleton University. As Magda said, “Both of our families believed in lifelong learning and the value of education to contribute to society in meaningful ways. We want to encourage others to carry these values, and to stay alert to what is going on in the world.”

The Jackson Family Scholarship will be awarded to outstanding graduate students enrolled in the Master of Philanthropy and Nonprofit Leadership (MPNL) program, who demonstrate a strong potential for leadership and innovation in community engagement on high-priority issues to local nonprofits, governments and businesses. Ted emphasized that he and Magda felt compelled to do something at this time, as nonprofits are navigating how to recover from the pandemic, and how to respond and support those in marginalized communities. They hope that students in the MPNL program will take on leadership roles in the sector and contribute to addressing growing challenges like this.

Susan Phillips, Professor in the School of Public Policy and Administration at Carleton, and founder and director of the Master of Philanthropy and Nonprofit Leadership (MPNL) program, recognized Ted’s impact at Carleton and in the broader community. She said, “Ted’s vision for providing technical and project assistance to community-based organizations led to the creation of the Carleton Centre for Community Innovation and generated a wide range of professional placements and learning opportunities for students in community-based organizations.”

Susan expressed her gratitude on behalf of the MPNL program for Ted and Magda’s generosity in establishing the Jackson Family Scholarship. She continued, “Ted made ‘community engagement’ an essential component of university education long before community engagement was well known or widely popular.  We thank Ted and his family for this continued commitment to community and to students through this scholarship.” 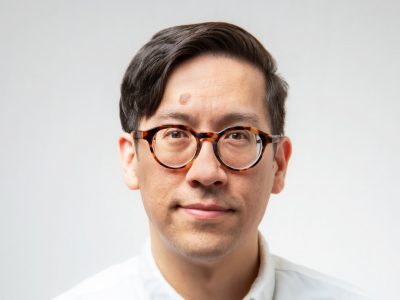