Sheri’s Summer Dig From the Island of Keros

Sheri’s summer dig report from the Island of Keros 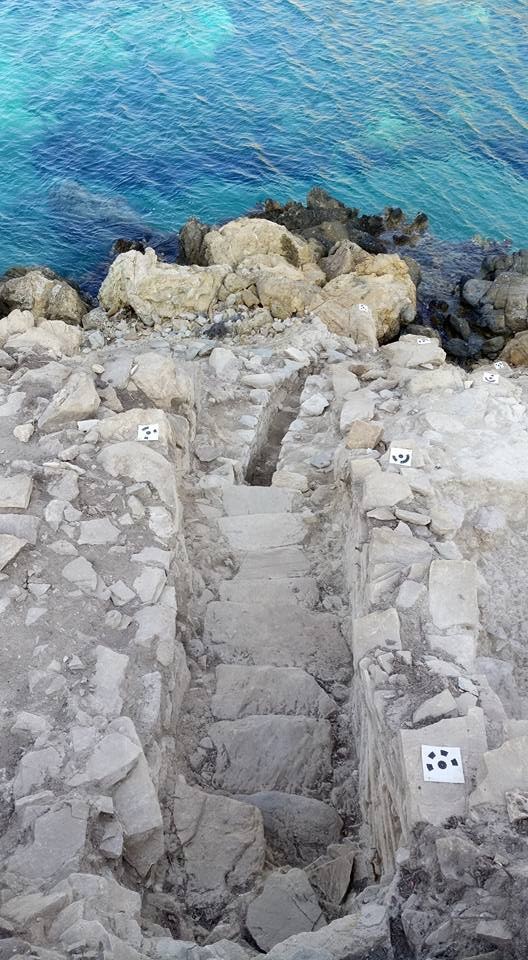 Staircase and Drain. Trench H, where I was fortunate enough to excavate. 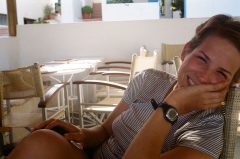 On the Third of September I arrived on the tiny island of Kouphonisi to begin six weeks of excavation on the neighbouring island of Keros. The Keros-Naxos Seaways Project, directed by Lord Colin Renfrew and Dr. Michael Boyd, aims to accumulate data from surveys, test trenches and excavation to discover whether a relationship between Keros and its neighbouring islands can be determined. The island of Keros first came to the attention of the archaeological world after looted fragments of marble figurines began appearing on the market. In 1963, Professor Renfrew was given permission to do a survey of Keros and collect a few surface finds. After multiple seasons of excavation, the island reaped two deposits of discarded figurine fragments. The figurines were broken intentionally, only one piece of the figurine was commonly discarded and they were brought from abroad. Directly adjacent to the deposits stands an islet by the name of Dhaskalio. Surveys and test trenches were performed in past years, but more developed excavation has been the focus of this current project, and it is an extremely interesting site. The depositions from Dhaskalio and the sites on Keros, though very close together in proximity and time, are very different from one another, the reason continues to be one of the many mysteries of the Cyclades. The soil chemistry on the north-western coast of Keros and on the Islet of Dhaskalio are both saturated with evidence of metal work, although no metal ore exists on these islands. It is so far believed that metal ore was smelted on Keros and brought to Dhaskalio to be cast into objects.[1]This movement of the stages of production is indicative of the importance of craft specialization at this time. We spent a lot of time between cutting roots discussing the romantic notions between the ritual and functional guideline of the site. 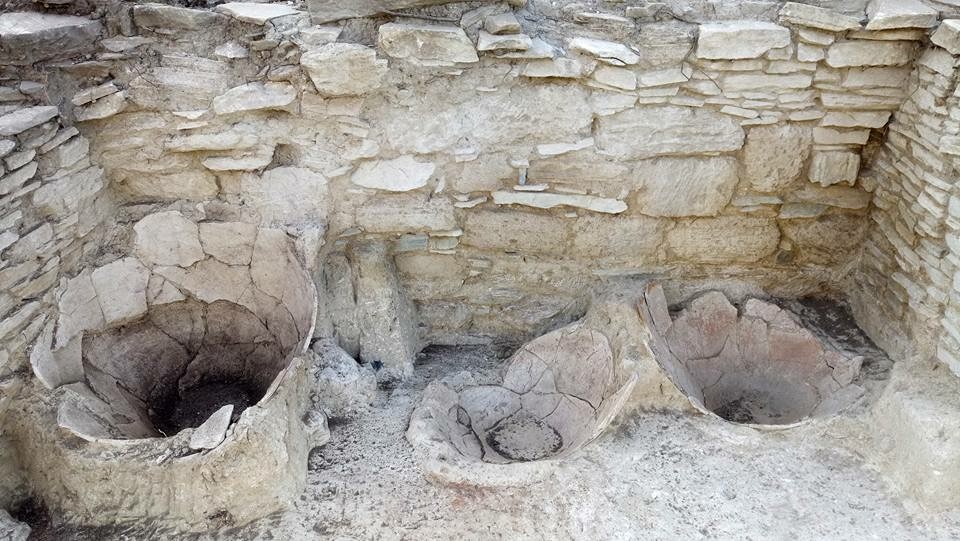 Present day excavations on Keros boast the title of the most technologically advanced excavations in Greece. With the iDig recording system and single context excavation, each context is given a recording within the app that provides photogrammetry, photographs, information on all finds, pottery analysis, flotation conclusions, soil chemistry and phytolith data. The goal of this type of recording is to attempt to lessen the destruction of archaeological processes, and allow future archaeologists to reconstruct the excavation and find information otherwise destroyed. The project also aims to produce results from ceramic analysis, flotation and soil chemistry daily, in order to give the correct amount of attention to important areas of the excavation area. 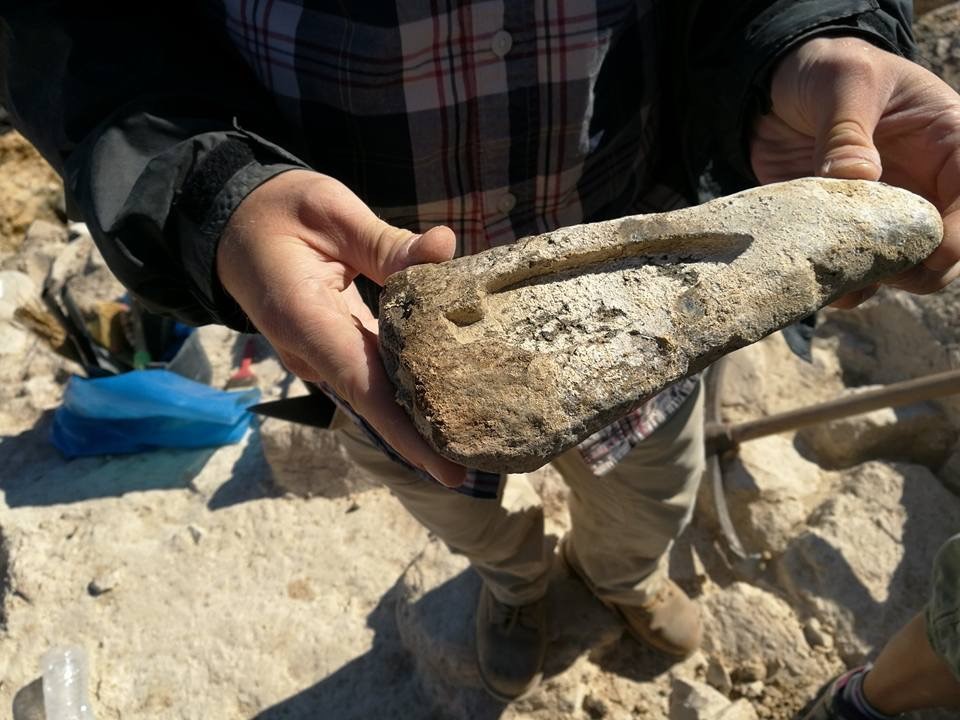 Stone mould for a spearhead. Found in Trench H.

In addition to excavations on the rocky islet of Dhaskalio, a small team excavated test trenches on Keros. It is an incredible experience to trek the rough terrain on the island, surrounded by the smell of thyme and eating lunch under ragged juniper bushes. Unlike Dhaskalio, where very few living things other than lizards and a ragged rat (who ate unattended sandwiches), Keros often treated you with the idyllic scene of a goat parade nestled in front of the gorgeous Aegean and the hills of the island. 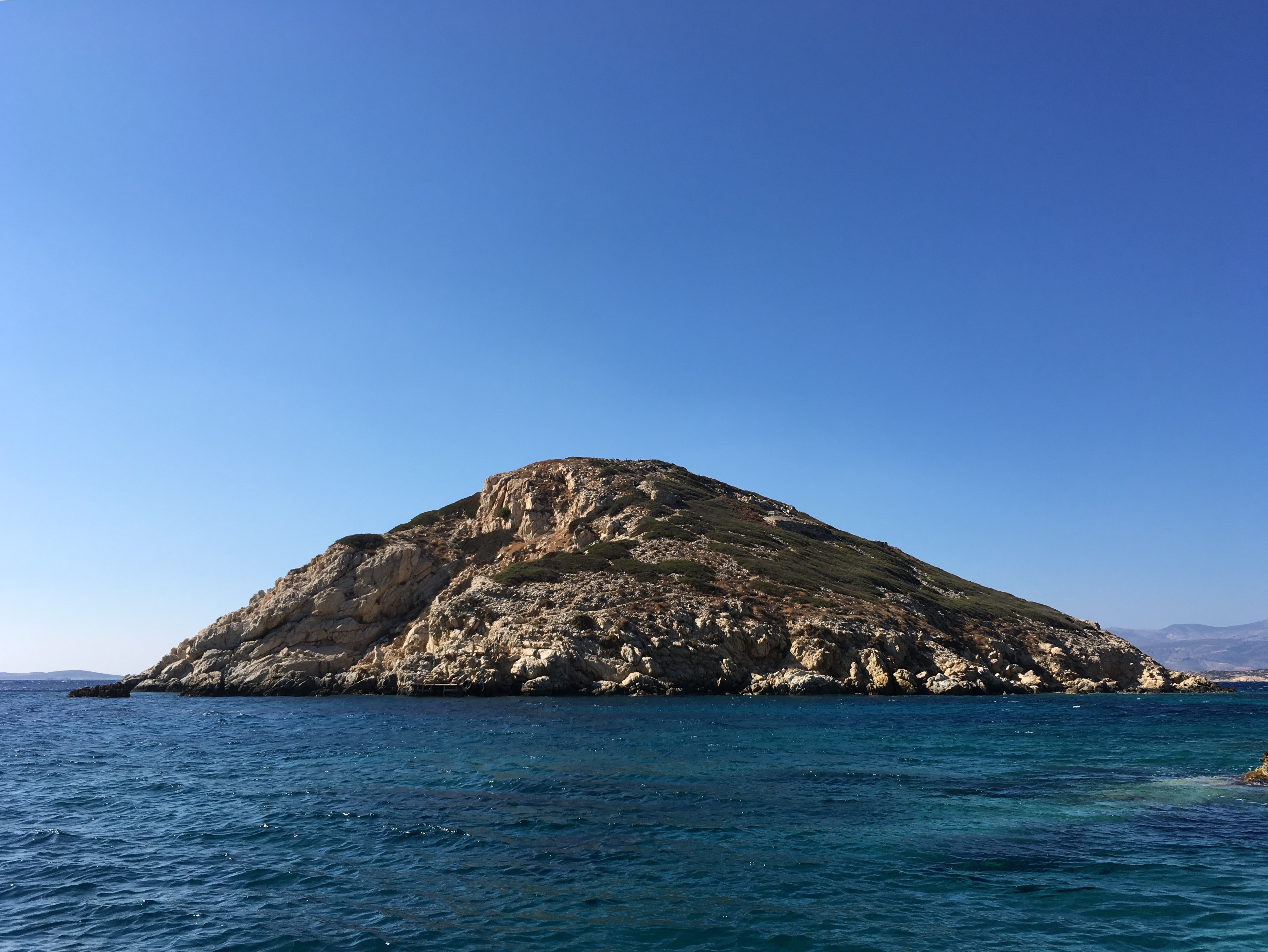 View of Dhaskalio from Keros

The rugged yet rewarding excavation experience contrasted our time on Kouphonisi, lazily swimming on the main beach with brightly painted boats or lounging on the rocks at Pori beach. Simple sandwiches on excavation were followed by dinners of delicious fish, the best lasagna I have ever had and raki for a nightcap. The lizards seen on Keros were outnumbered on Kouphonisi by the infamous stray cat population. Those on a boat tour to see Keros and Dhaskalio would see from a distance, the archaeologists, carrying a variety of strange artifacts: multitudes of stone disks, Kouphonisi pebbles, pottery, shell and bone, as well as the iconic blue flotation bags. On Kouphonisi these same tourists would see us carrying our research tools, iced cappuccinos and possibly a recent purchase from the jeweler. We blended in with the rest until we returned to our base before dinner to wash pottery, sort flotation residue and receive a lecture from Professor Renfrew and other exceptional academics we had the pleasure of working with. Although one settlement is under the dirt, the similarities between excavation of this Early Bronze Age site and modern day life on Kouphonisi extend to experiencing life alongside stones stairs, stone walls, metal craftsmanship and drainage systems. 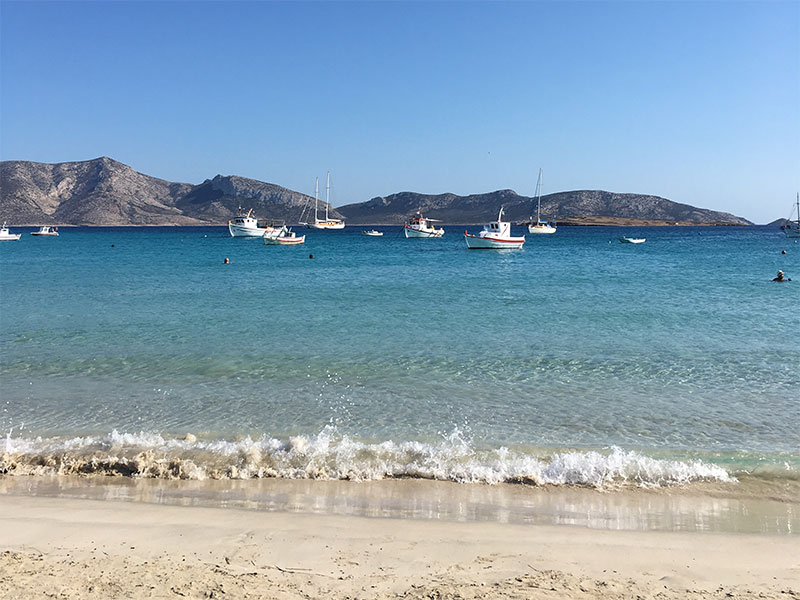 Partial view of Keros from Kouphonisi. Very tiny conical island of Dhaskalio to the far right.

When thinking upon my experience at Keros, I miss the incredible team members I experienced it with, and I marvel at the work we accomplished. We are all lucky to be seeing the incredible amount of technology that continues to be utilized in the archaeological world, but it astounds me to think that human labour will continuously be the bulk of progress. Archaeologists with various experiences working to read the soil and the material in the moment will always be essential to understanding the information remaining from our heritage.

All photographs are reproduced with permissions from the Keros-Naxos Seaways Project.