The Highlights for a Greek and Roman Student in Naples

The Highlights for a student in Naples by Ally Chapman, a 3rd year Greek and Roman Studies student at Carleton University, with pictures by Ally. 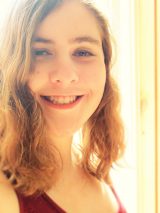 The first thing I noticed upon leaving Rome and heading for Naples was the change of scenery. Gone were the busy streets of Rome replaced with towering mountains covered in olive trees. The landscape was beautiful and set the tone for the wonderful sights that we would see as we explored Naples and the ancient sites it had to offer. 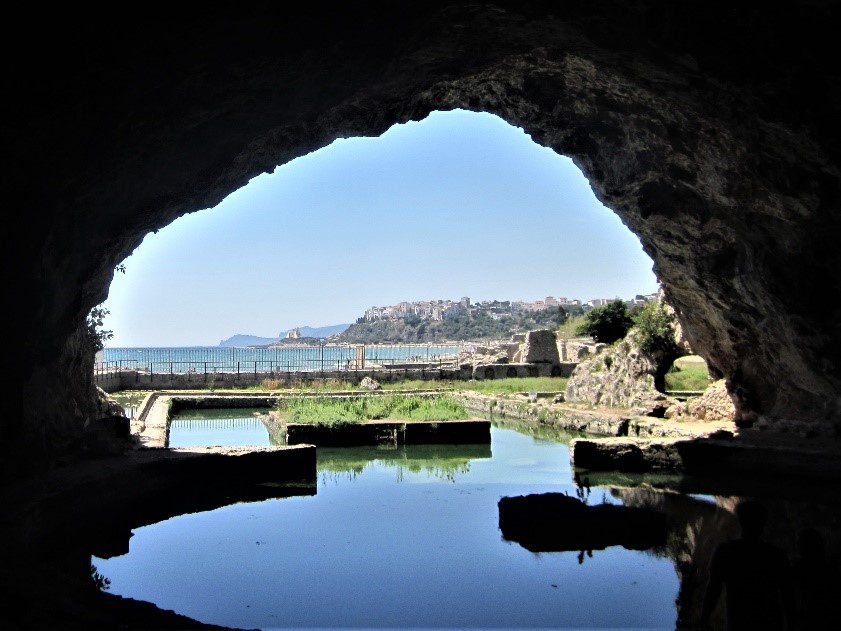 One of the first locations our group visited upon leaving Rome was Tiberius’ Grotto at Sperlonga. It is evident why Tiberius chose this location as the grotto faces the blue Mediterranean Sea and mountains surround it from behind. Within the grotto itself, the empty spaces where marble statues used to stand are stark reminders of what was once a magnificent dining room but now seems like an empty cave to those who do not know its history. The site’s museum houses what remains of these statues and while the depiction of the blinding of Polyphemus is mostly complete and spectacular with its attention to the fine details of the human form, the other statues are mostly destroyed. From what remains of these sculptures, it is easy to see that they would have been very impressive and it is quite disappointing to witness the fragmented condition in which they have been discovered and displayed.

The next day of our trip to Naples was spent exploring the town of Pompeii. To most students of classical antiquity, Pompeii may seem overrated since it is such a large tourist destination. However, I have always been drawn to Pompeii because of the beautiful artwork that has been preserved there and I was particularly excited to see the mystery fresco within the Villa of the Mysteries. I was not disappointed and was impressed by the size and vibrancy of the mystery fresco. Even though Pompeii is very tourist oriented, the extent of the site and all the different buildings made it an interesting, while also exhausting, day. 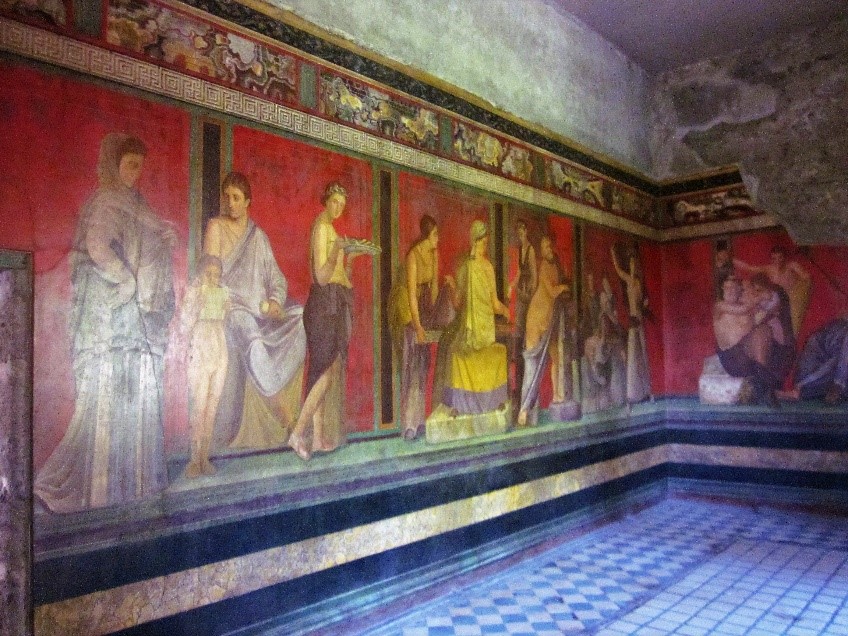 The Mystery Fresco from the Villa of the Mysteries, Pompeii

Our third day in Naples was spent exploring the lesser known locations that were affected by the eruption of Mount Vesuvius in 79 C.E. One such location was the Villa Poppaea at Oplontis which has many beautifully preserved frescos. During our visit I spent at least fifteen minutes in the villa’s atrium examining the massive fresco that decorated the walls. My takeaway was that the ability to survey fresco up close and with context is a massive privilege after spending much of my degree analyzing ancient art from pictures I found on google. After this we went to Herculaneum and while it is much smaller than Pompeii, it is no less interesting. The location offers a magnificent view of Mount Vesuvius and I was able to take some cool photos where the clouds made it seem like smoke was rising out of the volcano. The mountain possesses such an imposing presence that its looming figure becomes a constant reminder of just how much destruction it is capable of causing. Where Pompeii feels like a Roman theme park, filled with tourists, signs, and guides, Herculaneum feels like a ghost town. Its smaller scale, the preserved pieces of wood, and the casts of skeletons found in the boathouses creates an eerie atmosphere that forces you to confront the terrible tragedy that befell the unfortunate Romans who once called this place home.

The next day was Festa della Repubblica and most locations were closed so we spent the day exploring the city of Naples. We journeyed to the Museo Archeologico Nazionale di Napoli in the afternoon and got to wander around whichever exhibits interested us the most. I headed straight for the marble sculptures and was overjoyed with the extensive collection that the museum had on display. I was able to see some of my favourite pieces including the Doryphoros, the Farnese Hercules, and the Tyrannicides, which are much larger than I ever expected. The museum also owns the iconic Alexander mosaic which they display on the wall so that it can be fully appreciated. It is crafted out of the tiniest tesserae and made with such detail that one could mistake it for a fresco if they were not aware of its original context. The final exhibit that stood out to me was the fresco collection. Many of these iconic frescos have been used as cover photos for our Greek and Roman textbooks and being able to see them in person was an exciting experience. 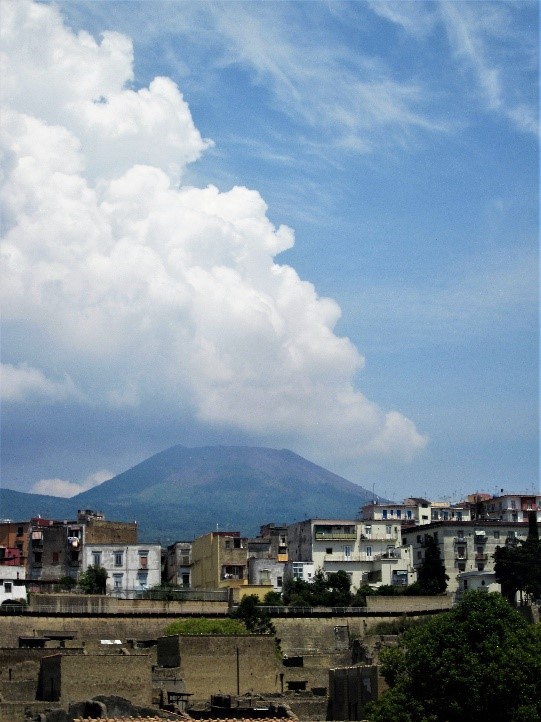 We took the bus out to Cumae the next morning and made the hike up to the acropolis. After a lecture on wall construction, we headed back down the hill and into the sibyl’s cave made famous by Vergil’s Aeneid. We finished the day with a trip to Vergil’s Tomb and it was more of a trek than we were equipped to complete after a long day of exploring Cumae. Not only do you have to walk along a long windy path up the hill, but you also have to climb a flight of narrow stairs, walk across the top of a tunnel going through the hill, and descend a few more stairs before actually entering the tomb. The interior is small and only a few people are allowed entrance at a time. There is a large window that offers a breathtaking view of thesurrounding landscape and is the perfect spot to take photos. In the centre of the tomb stands a tripod where visitors can leave offerings in memory of this revered poet. There were drawings, essays, and poems. Judging by the variety of skills and languages, visitors of all ages and nationalities have come here to pay their respects to Vergil.

As we packed up and headed back to Rome, our final stop in the Naples area was Capua. Capua is home to the second largest amphitheatre, with only the Colosseum surpassing it in size. Unlike the Colosseum, we were able to explore the passages beneath the surface of the amphitheatre. Most of these tunnels are still covered and they seem to go on forever. The minimal lighting, overgrown foliage, and winding nature of these passages gives the illusion of a never-ending maze separate from the world above. It is almost impossible to envision this tranquil underground world filled with the hustle and bustle of wild beasts, gladiators, and slaves all preparing for the extravagant spectacles that Romans enjoyed at amphitheatres such as this one. Capua also has a magnificent Mithraeum that has well preserved wall paintings. The sides of the long temple are painted with figures that are fading and almost unidentifiable and the roof features a cluster of stars. However, at the end of the temple there is a large painting of Mithras killing the bull. Some places show damage but the image of Mithras is easily identifiable and his clothes remain a bright blue and red that immediately draw the eye. It felt like a special privilege to be allowed to enter this space and get a brief glimpse into the Mithraic mysteries.

Entrance to the Sibyl’s Cave, Cumae

From the secluded grotto of Tiberius to the underground world of Capua, our trip to Naples offered a window into the Roman world that seemed more personal than the crowded monuments of Rome. As an admirer of ancient art, Naples was the perfect location to appreciate the wonderful sculptures, mosaics, and frescoes that were preserved by the eruption of Mount Vesuvius. I hope to someday return to Naples and spend more time in Pompeii and the Museo Archeologico Nazionale di Napoli and maybe I’ll be lucky enough to share all the knowledge I gained here with another group of Greek and Roman students. 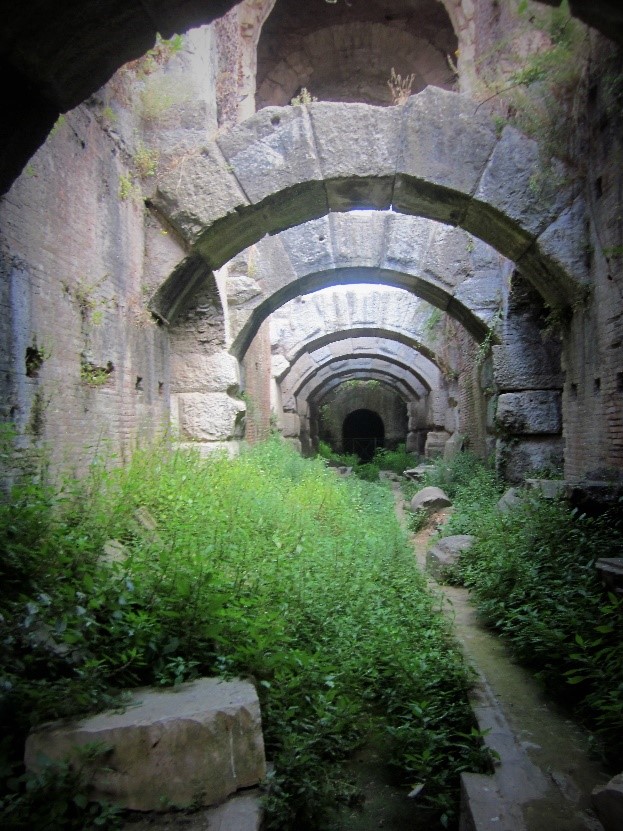 Underneath the amphitheatre, Capua