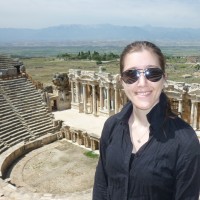 Laura Banducci is an archaeologist with a particular interest in the Roman republican period and in the Etruscan civilization of central Italy. She earned an MA in Latin and her MA and PhD in Classical Art and Archaeology from the University of Michigan. She has worked on archaeological projects in England, Greece, and Italy.

Her research is grounded in the idea that an individual’s daily behavior, as reflected by the material record, can provide important insights into large-scale societal changes in the ancient world.

Since 2009 she has worked on the Gabii Project Excavations (excavating the town of Gabii, 18 km East of Rome). Excavations are leading to a number of important discoveries regarding urbanism, burial practices, and domestic and public architecture in Roman Italy. The Gabii Project is run as an archaeological field school for students interested in learning state-of-the-art excavation, study, and recording techniques. As the Director of Finds at Gabii, Dr. Banducci is responsible for coordinating the study and publication of the vast array of artefacts from the site.

She co-directed the Capturing the Life Cycle of Ceramics in Rome project (CaLC-Rome), teaming with colleagues from the University of Missouri, the University of Glasgow, and the University of Burgundy Franche Comté in France. The goal was to examine traces of the production and use of ceramics excavated in the late 19th century from funerary and sanctuary contexts in Rome, stored in the Capitoline Museums. The project employed high-resolution imaging techniques that support the detailed metrical study of use wear traces to consider pottery consumption practices. The results are presented through an interactive online scholarly catalogue, making both the 3D models and the scientific data available to the research community and the broader public.

She is a member of the collaborative program in Digital Humanities and the Food Studies group at Carleton. She also advises students about summer fieldwork opportunities and is a point of contact for Carleton’s minor in archaeology.

2015. L.M. Banducci. “A tessera lusoria from Gabii and the afterlife of Roman gaming.” In HEROM: Journal of Hellenistic and Roman Material Culture 4.2, 199-221.