Home / Museums / To Do / Canadian Aviation and Space Museum 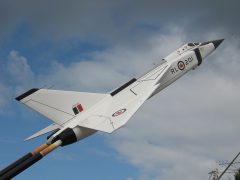 “Located on a former military air base just five kilometers from the Prime Minister’s residence at 24 Sussex Drive in Ottawa, the Canada Aviation and Space Museum focuses on aviation in Canada within an international context – from its beginnings in 1909 to today.

As Canada’s contribution to aviation expanded to include aerospace technology, the museum’s collection and mandate grew to include space flight. The collection itself consists of more than 130 aircraft and artifacts (propellers, engines) from both civil and military service. It gives particular, but not exclusive, reference to Canadian achievements. The most extensive aviation collection in Canada, it is also considered one of the finest aviation museums in the world.

Among the museum’s highlights are the largest surviving pieces of the famous Avro Arrow (its nose section and two wing tips), the original Canadarm used on the Endeavour space shuttle, the Lancaster bomber from the Second World War, and Life in Orbit: The International Space Station exhibition.”