Keeping a promise is sometimes difficult but when it needs to be kept, one must just do it! In the spring of 2018, I opened my big mouth and I promised the Queen Elizabeth scholarship coordinator, indefatigable Stephanie Pineau, that I will post a story about the first QE scholars to Canada and it has taken me this long to do so. In this write up I shall sing the praises of the Queen Elizabeth Scholarship program, as a viable program for dealing with climate change and social transformation with Africa as a focus, and I shall pay tribute to the originators of the program as visionaries of extraordinary geniuses.

Firstly, Africa is now the ‘final frontier’ for economic models that have already ecologically compromised the rest of the planet. Not long ago touted as the world’s ‘basket case’, it is now countenanced as a future breadbasket, a sustainable alternative and possibly the final bastion against global environmental degradation (Fatimah Kelleher, 2019).

Secondly, activists of feminist persuasions are already on the front line of the battle for ecological sustainability on the continent as exemplified by the work of Kenya’s Wangari Maathai, 2004 Nobel Peace prize winner. Their everyday struggles, uncompromised commitment, and willingness to envision a radical future in which justice, equity and rights harmonise with environmental sovereignty, have the potential to save us all (Mkandawire, 2015).

Ruth Nyambura of the *African Eco Feminist Collective*, for example, uses radical and African feminist traditions to critique power, challenge multinational capitalism and re-imagine a more equitable world, and also organisations like the *African Women Unite Against Destructive Resource Extraction (WoMin)* campaign against the devastation of extractive industries. In addition, localised organisations are currently resisting ecologically-damaging corporatisation: in South Africa, women residents have fought off land mining companies; in Ghana, the *Concerned Farmers Association*, led largely by women, are holding mining companies accountable for pollution of local watersheds; and in Uganda, women of the *Kizibi community seed bank* are preserving local biodiversity in the face of the commercialisation of seeds by corporate multinationals.

Today, something that occupies the minds of most of us is how to do our bit in the name of mitigating the historical ‘human impact’ on the physical environment (Castree, 2015). We are all familiar with issues such as biodiversity decline around the world and fresh water scarcity, to give just two examples. The 2018 IPPC report confronted us with the *undisputed facts*, namely that the time is almost up after all the abuse humans have heaped on the rest of nature (humans included).

The IPCC report suggests that *we are going to have a great deal of difficulty reaching 1.5 degree celcius, which is probably impossible, and even capping it at 2 degrees is going to be extremely difficult* (Homer-Dixon, 2018).  Homer-Dixon believes that the only way we can cap global warming at 2 degree celcius will probably involve *the extraction of large amounts of CO2 trapped in the atmosphere*, and even that is not possible at the moment as the technology to do that is not in place (Homer-Dixon, 2018).

However Simon Dalby (2018) is relieved by the IPCC report for its bluntness. According to Dalby (2018), there is a *’welcome shift’ in emphasis on the immediacy, and necessity to act* (Dalby, 2018). He believes that huge transformations are possible with very basic mundane things such as using bicycles for mundane-short-distance travel, for example (Dalby, 2018). Another way of achieving sustainability is to give *local knowledge* the respect it deserves in becoming the basis for all mitigation and adaptation strategies (Ahenakaw, 2014).

Hence, in spite of the gloomy nature of the report, it serves as an opportunity for humankind to take action on other cross cutting issues in society including flooding, droughts, and resource access. The question clearly is, how do we address climate change and other cost-cutting human consequences? Thankfully, climate change adaptation and mitigation has now become the ‘new development mantra.’ (Bose, P., 2016). Bose refers to this era as the ‘climate turn’ in development work. We need to make every effort to put in place mitigative and adaptive processes and programs in order to avoid a displacement of our communities by climate change, as well as development processes meant to ameliorate the effects of climate change and its effects.

It is against this background that Carleton’s Queen Elizabeth Scholarship (QES) project was created to train the next generation of scholars through a *multi-disciplinary network of climate change and societal transformation experts* that will facilitate future ongoing collaborative research, and to share a global perspective on mitigative and adaptive responses to climate change and other cross cutting issues (Brklacich, 2018). QES’s prime motive is to work together as scholars to come up with solutions to avert complete “climate catastrophe, with 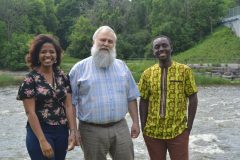 wars, famine and disease spreading across the globe.” (IPCC Report, 2018). I want to believe that in the short history of the program our scholars have done that and more.

One cardinal fact is that the QE program rocks, and *we must pay homage to all the wonderful minds who have made this project a successful one.* Personally, this program has broadened my horizon so much so that I feel more connected to societal transformation and climate change scholars in sub-Saharan Africa now then I was a few years ago.

In 2018, Carleton University hosted 10 scholars from Africa (2 from Ghana, 4 from Malawi, and 4 more from Tanzania) with expertise in a wide range of endeavours. Just like this year’s cohort (2019), each scholar from the 2018 cohort pursued research in their areas of expertise linking up with local organizations to work on various aspects of climate change mitigation and 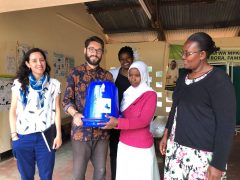 adaptation.  In addition one scholar, Carleton PhD Robbie Venis, worked with the Nelson Mandela African Institute of Science and Technology as well as Tembo Trust in Tanzania on a water filtration project.

Subsequently the scholars had the opportunity to participate in some community activities in Ottawa. For example, a group of scholars went to see a game of ice hockey (Canada’s national sport) at the Scotia Bank Place and interact with residents of the national capital region. For some of them, it was the first time seeing the ‘miracle on ice’ and how passionate Ottawans are about their local club – the Ottawa Senators. Some of the scholars also took time off their busy schedules to witness a local political campaign as it is done in the province of Ontario. Other unofficial activities included a visit to a local football club where a substantial number of football equipment was donated by Chris Roth youth football coach extraordinaire, and Coach Gigio (Ottawa’s own version of Tele Santana of Brazil football). Other initiatives are currently underway in various parts of Tanzania, Malawi and Ghana.

The second cohort (2019) is organized just like the first one except that the 2019 cohort who went to Canada stayed in Ottawa for 3 months instead of 4 months. During the first week of April 2019 Carleton university welcomed 14 scholars from Tanzania, Malawi and Ghana. The scholars wasted no time at all and went straight to presenting their research proposals and/or publications to the whole group.

This year the 2019 cohort of scholars also put together presentations on the state of climate change in their respective countries, which were presented at the Sunnyside library in Ottawa.  An event which was very well received.  https://newsroom.carleton.ca/story/climate-change-conversations/ 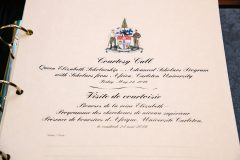 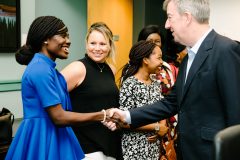 Ottawa where the Mayor of the City, His Worship Jim Watson (an alumni of Carleton University) honoured the scholars by declaring May 24th 2019 as *Carleton Queen Elizabeth Scholars Day in the City of Ottawa*, (https://newsroom.carleton.ca/story/queen-elizabeth-scholar-day/) with each member of the cohort receiving a personal plague commemorating the day. The city manager (Mr. Steve Kanellakos, a strong advocate for diversity and international presence/relationship in the 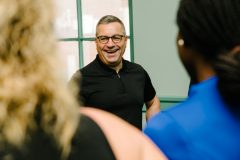 national capital) on his part hosted the cohort with presentations from various *climate-related project directors*, with a promise to work collaboratively with members of the cohort on mutually beneficial projects in their various cities of origin. It was then the turn of the longest serving city councillor (and my second favourite politician of all time) Rick Chiarelli to host the group for lunch. In attendance at this august event were the two Carleton University  members of the cohort who are slated to visit Mzuzu and Mzuzu University in Malawi (Kusi-Appiah is currently in Mzuzu and Alicia Gil will be visiting Mzuzu in October 2019).

Can’t wait to see what the future holds for Carleton’s Queen Elizabeth Scholarship project and these #QEScholars!