The Truth and Reconciliation Commission Call to Action 80 seeks to honour residential school survivors, their families and communities. On September 30, the School of Public Policy and Administration at Carleton University invites you to join us to learn about Inuit social and economic experiences between 1950-1975 and the Inuit-led and delivered 2007-2010 Qikiqtani Truth Commission (QTC), which shares perspectives between Canada and Inuit, Northern and Southern Canada, Indigenous and non-Indigenous peoples. The event will discuss historical narrative and contemporary action, and provide a closer understanding of policy processes, societal shifts and collective visions of change.

In 2007, the Qikiqtani Inuit Association formally began Canada’s only Indigenous-led and Indigenous-funded truth commission — the Qikiqtani Truth Commission (QTC). As Executive Director, Madeleine Redfern was involved in all aspects of the QTC’s work from the design of the commission’s work to negotiating access to government records to reporting. Through a conversation with Julie Harris, the QTC’s research coordinator and co-author of QTC reports, Madeleine will reflect on how the QTC’s work fits into the landscape of reconciliation and Canada’s commitment to implementing the United Nations Declaration on the Rights of Indigenous Peoples. 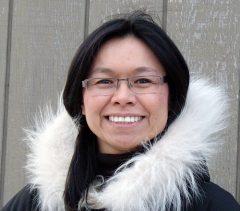 Madeleine Redfern from Iqaluit, Nunavut has a great deal of governance and volunteer experience with Indigenous and Inuit organizations. She is a graduate of the Akitsiraq Law School with an LLB from the University of Victoria and the first Inuk to be given a Supreme Court of Canada clerkship. Indspire Award recipient for her contributions to Public Service. Madeleine was the Executive Director of the Qikiqtani Truth Commission, which reviewed the “effects of federal government policies on Eastern Arctic Inuit” between the 1950s and 1980s. Her advocacy, professional, and governance work has shown her dedication and passion toward the development and delivery of programs assisting Aboriginal, Inuit, northerners and Canadians that reflect community values, needs, and priorities.

Julie Harris is a public historian and heritage professional based in Ottawa whose firm, Contentworks, worked on the Qikiqtani Truth Commission (QTC) to from 2008 to 2013. Julie has worked for other Indigenous organizations and communities, including the Truth and Reconciliation Commission of Canada, the Qikiqtani Inuit Association, Treaty 8 Tribal Association, the Indigenous Heritage Circle, and (IHC) and the First Peoples’ Cultural Council (BC). She recently co-authored a study for the IHC on UNDRIP.