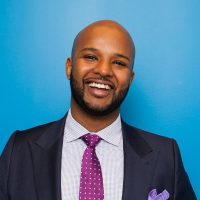 Liban Abokor is the Executive Director of Youth LEAPS, a non-profit organization dedicated to improving educational and employment outcomes for Black youth in Toronto. He is also a co-author of the report, Unfunded: Black Communities Overlooked by Canadian Philanthropy, which highlighted the inequitable funding of Black communities by Canada’s philanthropic sector.

Liban has over 15 years of experience and leadership in the areas of education, healthcare, housing, philanthropy, and social service. He formerly worked as a Policy Advisor for the Ontario Ministry of Health and lead Local Economic Development Initiatives for Toronto Community Housing. Liban was also a founding member of Ontario’s Premiers Council on Youth Opportunities, which guided the development of Ontario’s Youth Action Plan and Youth Opportunities Fund.

Regarded as a social impact leader in Canada, Liban is a key voice in the philanthropic sector, where he works to disrupt inequitable practices and modernize the sector through a justice-based approach.

A dedicated volunteer, Liban has served on the boards of the Laidlaw Foundation, Central Neighbourhood House, and the Catherine Donnelly Foundation. Currently, he is a Board Director with the Samara Centre for Democracy, Shoot For Peace and is a member of the City of Toronto’s Economic Development and Culture Division’s Program Advisory Committee.

Liban studied at York University to pursue a Bachelor’s Degree in Political Science and obtained a Certificate in Social Work from the University of Toronto.