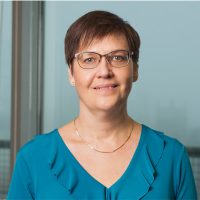 Cathy Barr is Vice-President, Mission Effectiveness at Imagine Canada, a national charitable organization whose mission is to strengthen and support Canadian charities and nonprofits so they may better serve and engage individuals and communities here and around the world.

Cathy has been with Imagine Canada since 2002, when it was still known as the Canadian Centre for Philanthropy. From 2002 to 2007, she was Director of Research. In this role, she was involved in several major research projects including the Canada Survey of Giving, Volunteering and Participating; the National Survey of Nonprofit and Voluntary Organizations, the Johns Hopkins Comparative Nonprofit Project, and the Canada Volunteerism Initiative’s Knowledge Development Centre.

In 2007, Cathy became the founding Director of the Insurance & Liability Resource Centre for Nonprofits. The Centre was established to help charities and nonprofits understand and manage their risks and become informed insurance consumers. She later took on responsibility for Imagine Canada’s Ethical Code Program, which led to her involvement in the creation of Canada’s first Standards Program specifically designed for registered charities and public-benefit nonprofits.