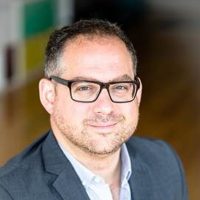 Michael Lenczner has over 15 years of experience working at the intersection of technology and the nonprofit sector. He splits his time between serving as the CEO of Ajah, a Montreal-based company that develops online tools for fundraisers, and being the Director of Powered by Data, a nonprofit initiative launched by Ajah that helps the nonprofit sector use data to increase its impact.

In 2003, Michael founded Île Sans Fil, a community wireless group now operating over 500 public hotspots in the Montreal area. Working in open data since 2005, he has co-founded national, provincial and municipal lobbying groups such as Montréal Ouvert, as well as coordinated numerous hackathons on issues such as sustainability, corruption and municipal services. He co-founded Ajah in 2010 and in 2013, Ajah created Powered by Data. Shortly after, Powered by Data was recognized  as a leading innovation in global philanthropy.

Michael also serves on several nonprofit boards and advisory groups related to technology, democracy, and the nonprofit sector. He is a frequent participant in community – university research partnerships, and has published in academic and non-academic journal articles on new applications of data and technology in the areas of public administration and service delivery, policy development, and epidemiology.