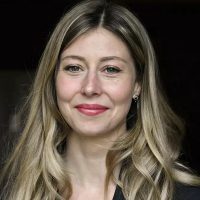 Maude Marquis-Bissonnette holds a master’s degree from l’École nationale d’administration publique (ÉNAP) from Montréal and a BSc in political science from l’Université de Montréal. She worked as a strategic planner at the regional level but also counts many mandates with public organizations as a consultant. During her doctoral studies, she became involved in the Centre for Urban Research and Education (CURE) directed by Professor Christopher Stoney. In 2017, she was elected as municipal councilor in the city of Gatineau, and run as party leader for the mayoral course in November 2021. As city councilor, she has taken on numerous municipal files, including land use planning, the environment, housing and social economy. Involved in the community with local organizations, she notably sat on the board of directors of the Société de transport de l’Outaouais (STO) and that of the Office d’habitation de l’Outaouais.

For her academic work, Maude has earned several recognitions, including the Board of Governors’ Graduate Student Bursary (Carleton University, 2016-2017), the Sandra Bach Memorial Award for outstanding graduate students (academic excellence) (Carleton University, 2016) and the National Student Achievement Award jointly awarded by the Institute of Public Administration of Canada (IPAC) and the Canadian Association of Programs in Public Administration (CAPAP) (2013).