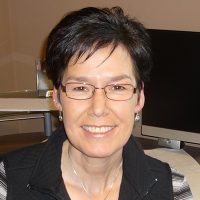 Terry Poucette is from the Stoney-Nakoda First Nations of Treaty Seven in Alberta. Terry was raised on reserve by strong Stoney women in her family who taught her Nakoda culture and language.

Terry has spent most of her career as a senior manager of on-reserve First Nations organizations in Alberta and BC. After she got her doctorate, Terry was an assistant teaching professor and manager of the Diploma in Indigenous Community Development and Governance at the University of Victoria.