3ci is sharing this important message on the debate over the Baffinland project from a longstanding collaborator, Norman Cohn: 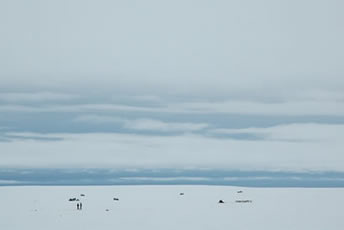 This Saturday, one day before 120 million viewers will watch the Super Bowl live from Tampa, another live television event will unfold in Pond Inlet in the Canadian arctic that maybe a few thousand people worldwide will be lucky enough to watch.

All day from 9 in the morning until 9 at night, with short breaks for coffee, lunch and dinner, a continuous stream of Inuit men and women, elders and youth, unilingual and bilingual, will step up to a microphone to say what they think and feel about being bulldozed – by the gigantic multinational Baffinland Iron Mines Corporation, their own Canadian government, their own Nunavut government and their own Inuit Organizations – to surrender their land, wildlife, culture and human rights in order that those bulldozers make an uncountable profit at their personal expense.

I have seen something like this before and can tell you, without hyperbole, that you should not miss it. Unforgettable testimonies at similar hearings in 2012 are among the most astounding scenes in a film we made in 2014 called Ataatama Nunanga (My Father’s Land), another show only a few thousand people worldwide ever have seen. This film is on iTunes in thirty countries subtitled in six different languages if you want to preview Saturday’s show in a ‘historical context.’ https://itunes.apple.com/ca/movie/my-fathers-land-ataatama-nunanga-subtitled/id1462679494

But this Saturday’s show WILL BE LIVE, happening while and if you watch, from a hamlet in the arctic wilderness to wherever you are; and on Live Television as dramatic and compelling as the Senate Watergate Hearings were live in 1973, as other-worldly and surreal as the Moon Landing live in 1969 and as hypnotically horrifying as the Twin Towers hit, burning and finally collapsing Live on Television the morning of September 11, 2001.

Instead of being hyped like Sunday’s Super Bowl by weeks of advertising before being televised by networks around the globe, this Saturday’s Pond Inlet Testimony will appear on Uvagut TV, the world’s newest, smallest and most obscure TV network, launched just two weeks ago with no outside funding by a small Inuit non-profit, Nunavut Independent Television Network (NITV), and the Inuit media arts collective ISUMA, both operating out of Igloolik, Nunavut for the past thirty years. And no advertising.

The only way people will know they can watch this is if we tell them.

I’m telling you now so you can pass it on.