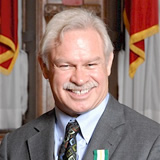 Edward Jackson is a Senior Research Fellow at the Carleton Centre for Community Innovation. He previously served as founding Director and Chair of the Centre as well as Associate Dean (Research and Graduate Affairs) in the Faculty of Public Affairs at Carleton University. He is also Adjunct Research Professor in Carleton’s School of Public Policy and Administration and is cross-appointed to the Norman Paterson School of International Affairs and the Institute of African Studies.

Dr. Jackson built a distinguished career over more than 20 years at Carleton University in teaching, research and administration, retiring in 2014.   As a tenured public-policy professor, he taught and supervised more than 500 graduate students in courses on program evaluation, program management and social-economy organizations in the international development and non-profit studies streams of Carleton’s graduate School of Public Policy and Administration.   As Associate Dean, he strengthened the capacity of 20 research centres across the Faculty of Public Affairs and chaired university-wide working groups on community engagement and partnerships.  His 2009 report, The Oxygen of Community, has provided guidance for Carleton leaders in advancing the institution’s community engagement strategy.

In 1997 he co-founded, with the McConnell Foundation, the pan-Canadian Community Economic Development Technical Assistance Program which, over a decade, made social-business grants to more than 500 community corporations, cooperatives and firms.  In 2001, he co-founded the Carleton University-World Bank International Program for Development Evaluation Training, which became a globally acclaimed executive-development offering.  With the Carleton Centre for Community Innovation, he supervised a wide range of students and led action-research projects, for example, evaluating the microloan program of Alterna Savings and Credit Union and investigating the role of post-secondary institutions in Eastern Ontario in sustainable regional economic development.

Professor Jackson also served as founding Principal Investigator (2011-2014) of the Community First: Impacts of Community Engagement project, a seven-year, SSHRC-funded initiative examining how campus-community partnerships can be designed to be of optimum benefit to community-based non-profit organizations in the fields of poverty reduction, food security, the environment and violence against women.  The project network served over 300 engaged scholars and students and civil-society practitioners working across seven Canadian provinces.  In addition, Professor Jackson served as volunteer Convenor of the 2015 Community, College and University Exposition (C2UExpo 2015), a conference that attracted 300 delegates from a dozen countries.  He also co-founded Carleton’s multi-disciplinary Gender Equality Measurement Group.

Through his contract research, Dr. Jackson has advised and partnered with a wide range of public, private, philanthropic and non-profit organizations in all parts of the world.  In recent years, for example, he has carried out evaluations and capacity building assignments on universities and social infrastructure for the McConnell Foundation and the University of Winnipeg, on gender lens investing for the Caribbean Development Bank, Australia Aid and the Canadian NGO WUSC, and on African scholarship programs in North American universities for the Mastercard Foundation.

An active, multi-disciplinary scholar, Professor Jackson has published and lectured in more than a dozen social-science fields, and his work has been cited in over 150 peer-reviewed journals.  He serves on a wide range of academic and professional committees, including the editorial advisory boards of The Engaged Scholar Journal, the Journal of Sustainable Finance and Investment, and the Journal of Finance and Risk Perspectives.  A former visiting lecturer at Trent, Victoria and Warsaw universities, he also holds appointments as an Adjunct Professor of education at the University of Ottawa and as Honorary Associate with the Institute of Development Studies in the United Kingdom.

As a volunteer, he chairs the Board of Directors of the Canadian arm of the non-profit Diamond Development Initiative, which works for better livelihoods for artisanal miners and their families in Africa.  He is also a volunteer advisor to the Coalition of Immokalee Workers, a farmworkers’ rights organization based in Southwest Florida, and creator of the award-winning Fair Food Program.

Ted Jackson has received the Karl Boudreault Award for Leadership in Evaluation, the Canadian Evaluation Society Award for Contribution to Evaluation in Canada, Carleton University’s Faculty of Public Affairs Teaching Excellence Award and its Award for Contribution to the University, the Community Development Society’s Current Research Award, and the Ontario Medal for Good Citizenship. In 2018, he received a lifetime award for his promotion of participatory partnerships from the UNESCO Chair in Community-Based Research and Social Responsibility in Higher Education.

(2018). “Facing Challenges, Building the Field: Improving the Measurement of the Social Impact of Market-Based Approaches (with K. Harji). American Journal of Evaluation, 39(3), 1-6.

(2013). “Interrogating the Theory of Change: Evaluating Impact Investing Where It Matters Most.” Journal of Sustainable Finance and Investment, 3(1), 95-110.

(2014). “The Architecture of Engagement: Financing the Institutional Structures that Support Community-University Partnerships.” In C. Escrigas, B. Hall and R. Tandon (eds). Higher Education in the World 5. Barcelona: Global University Network for Innovation, 50-55.

(2019). “Catalytic Capital for Women’s Economic Empowerment:  Report of the External Review of the Impact Investment Component of Investing in Women” (with K. Alvarez), Investing in Women Initiative, Manila. 73p.  Link

(2018). “Catalyst for Sustainability: The Achievements, Challenges, Lessons and Prospects of the University of Winnipeg Community Renewal Corporation.” Summary Report and Full Report. UWCRC and the McConnell Foundation, Winnipeg and Montreal. 85p.

(2016). “Private Capital for Sustainable Development: Concepts, Issues and Options for Engagement in Impact Investing and Innovative Finance.” (With A. Koenig and B. Carriere). Danida Evaluation Department, Ministry of Foreign Affairs of Denmark, Copenhagen. 81p. Report.

(2013). “Lesbian, Gay, Bisexual and Transgender Rights: A Call for Leadership by Canada” (with I. Smillie and S. Brown). McLeod Group, Ottawa. 11p. Report.

(2009). “The Oxygen of Community: Report of the Initiative for Community-University Engagement,” Carleton University, Ottawa. 80p. Report

(2018). “Time to share the costs of participation in impact investing.” Institute of Development Studies, October 9, 2018.