Lesbians Free Everyone – The Beijing Retrospective 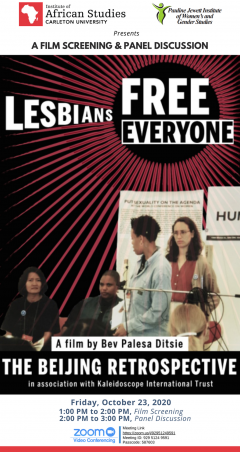 Dr. Bev Ditsie (Hon) is an award winning filmmaker/Reality TV Director and social justice activist best known for addressing the UN at the 4th World Conference on Women in Beijing (1995), the first out African Lesbian to do so. She is the first of many things – including first TV child Actor in South Africa, Founding member of the first multiracial LGBTIQA organization in SA, GLOW – which organized the 1st Gay and Lesbian Pride March in Johannesburg, and starred in the first reality TV show of its kind (LiveWire Communites, NNTV 1994/95).

The honorary doctorate was bestowed by the Claremont Graduate University in California in 2019, in recognition of her work as a human rights defender who uses media to advance and represent the marginalized.