Franny Nudelman (English) published Fighting Sleep: The War for the Mind and the US Military (Verso, 2019). Here are some of her reviews:

“Sleep seems to mark a realm wholly separate from public affairs, but Fighting Sleep reveals its methodical colonization by the US national security state and its surprising centrality to Cold War American politics and culture. Moving deftly between film and public protest, military psychiatry and veteran experience, documentation and reality, Franny Nudelman charts a fascinating pathway from the CIA mind-control experiments and the ‘brainwashing’ scare of the Korean War era to the troubled sleep of the traumatized veteran, the endless wakefulness of the POW, and the emergence of a veteran’s movement focused on the right to sleep in public.”

– Timothy Melley, author of The Covert Sphere: Secrecy, Fiction, and the National Security State, Professor of English and Director of the Miami University Humanities Center

“In this lucid and moving cultural history of the US from the end of WW2 through the Vietnam War, Franny Nudelman explores the problematic status of sleep for soldiers damaged by the trauma of warfare. Writing against the instrumental logic of sleep as the recuperation necessary for a return to service and combat, she poses the passivity and vulnerability of sleep as an interval of refusal, of healing, or of oblivion in relation to the imperatives of a militaristic society. A revelatory book.”

– Jonathan Crary, author of 24/7: Late Capitalism and the Ends of Sleep

“If you’ve never thought of sleep as direct action, Franny Nudelman’s marvelous tale of the struggles over soldiers’ sleep will awaken you to the mundane tactics of peaceable assembly in the face of the nightmares of militarism. A riveting re-imagination of antiwar activism for our post-traumatic times.”

– Michael Denning, author of Noise Uprising and The Cultural Front

Andrew M. Johnston presented three papers on aspects of the history of the Women’s International League for Peace and Freedom, one entitled “Human rights, the Great War, and the Women’s International League for Peace and Freedom’s critique of nationalism,” at Culture & International History VI: Visions of Humanity, hosted by the John F. Kennedy Institute for North American Studies, at the Freie Universität Berlin in May 6-8 (picture below). The second was at the Annual Meeting of the Society for Historians of American Foreign Relations (SHAFR) in June, and was titled, “‘A little child, born of dissipated parents’: The Women’s International League for Peace and Freedom’s feminist critique of the League of Nations, 1919-1924.” It was part of a panel called Women, peace, and the quest for international order between the wars, with Marie-Michèle Doucet (RMC), Rebecca Shriver (Missouri Southern State) and Wendy Chmielewski, the George R. Cooley Curator Swarthmore College Peace Collection, Swarthmore College. He presented a third version of these papers at A Century of Internationalisms: The Promise and Legacies of the League of Nations in Lisbon, 18-20 September, 2019. 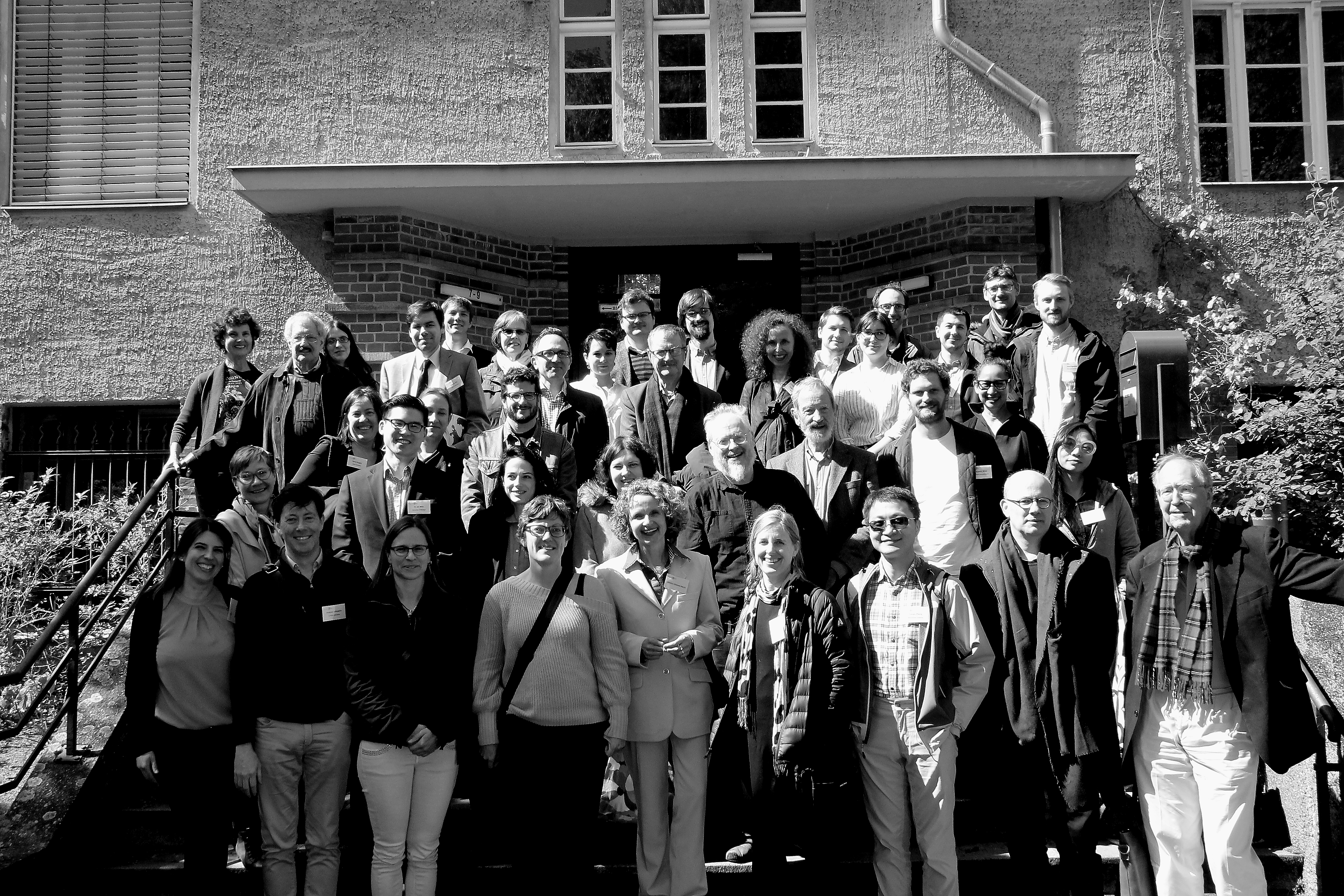 Andrew M. Johnston published a review of Tony Smith’s Why Wilson Matters: The Origin of American Liberal Internationalism and Its Crisis Today (Princeton, NJ: Princeton University Press, 2017) in Passport: The Society for Historians of American Foreign Relations Review, 49, 1 (April 2018): 66-68.
http://shafr.org/content/april-2018-issue-passport-society-historians-american-foreign-relations-review He also published two entries in Opposition to War: An Encyclopedia of United States Peace and Antiwar Movements (Santa Barbara, CA: ABC-Clio, 2018), one on the Nobel Peace Prize winning “Emily Greene Balch” (57-60), and the other on the Canadian architect of the 1915 plan for “Continuous Mediation without Armistice” during the First World War, “Julia Grace Wales,” (pp. 690-91).

Priscilla Walton (English) and Andrew M. Johnston (History) both attended the annual conference of the Canadian Association of American Studies (CAAS), this year hosted by UNB in Fredericton under the title Homeland Insecurities. Priscilla presented a paper entitled, “The Enigma She Was”: Ethel Rosenberg and her Fictional Autobiography. Andrew’s paper was called Apathy, Passive Resistance, and Cynicism: Randolph Bourne’s Sociology of the Liberal State.

Congratulations to Michel Hogue, whose book Metis and the Medicine Line has won Stubbendieck Great Plains Distinguished Book Prize, presented by the University of Nebraska-Lincoln’s Center for Great Plains Studies! You can read a Q & A with Michel here.

Andrew M. Johnston and Hans-Martin Jaeger (Political Science) were invited guests of the John F. Kennedy Institute for North American Studies at the Free University in Berlin. As well as continuing their work in designing a partnership between Carleton and the Free University, they delivered two teaching modules to JFKI graduate students. Andrew spoke on human rights and the intersectional difficulties of the Women’s International League For Peace and Freedom in the interwar years. Hans-Martin presented on the concept of “world opinion” and the evolution of human rights from the League of Nations to the United Nations.

Melissa Haussman (Political Science) was co-author, with Lori Turnbull, “Legislatures and Parties: Heightened Divisions since the 1990s,” Chapter 8, in David Biette and David Thomas, eds., Canada and the US: Differences that Count (University of Toronto Press, 2014).

Priscilla Walton (English) was in conversation with Anthony Stewart, author of Visitor, My Life in Canada, at his book launch hosted by Octopus Books. The event was in collaboration with Carleton University’s Department of English and Literature. In the book, Stewart poses serious question about the main challenge facing Canada in the future which, he suggests, is “not economic or political. It’s ethical. On the issue of racism, Canadians tend to compare themselves favourably to Americans and to rely on a concession that Canadian racism, if it exists at all, is more ‘subtle.’ Is there a future time when newcomers and visible minorities will be enabled to feel like they belong in Canada? Or will they have to accept their experience as visitors to Canada no matter how long they have lived here? To quote Stewart: “As a Black Canadian, the Canada that I have come to see is different from the idealized Canada of Tim Hortons commercials, Hockey Night in Canada and countless other imaginings. It’s a Canada that takes credit for a level of open-mindedness that far exceeds its reality. It’s a Canada that distinguishes itself for its population of citizens who passively lay claim to welcoming difference while staying silent when those around them who are in fact different are disenfranchised, dehumanized, undervalued and left to feel that we do not belong in the country in which many of us were born, or about which we are told tales of tolerance.”

James Deaville (Music) recently spoke with NPR about music in reality television, excerpts from which interview will appear on their website. He is just back from Los Angeles, having interviewed composers, music supervisors and trailer house executives for his ongoing project about trailer music (a trip supported this year by an Internal Development Grant), a bridging grant from his SSHRC IDG on trailer auralities (see Trailaurality.com for details about the project). He also has a piece on the auralities of early sound newsreels (late 1920s) coming out in a Routledge book on music in documentary film. And he currently working on an article about Toscanini, Ormandy and the first televised concert (CBS and NBC in March, 1948) for a collection he is co-editing with Christina Baade called Music and the Broadcast Experience (OUP). He is also co-editor, with Dana Gorzelany-Mostak, on a special issue of the journal Music and Politics about music and the American election 2012.

And if that’s not enough, he has recently published “Performing Black Identity on the Blue Danube: The Songs of African-American Entertainers in Turn-of-the-Century Vienna,” in Crosscurrents: American and European Music in Interaction, 1900-2000, ed. by Felix Meyer, Carol J. Oja, Wolfgang Rathert, and Anne C. Shreffler (Woodbridge, UK: The Boydell Press, 2014), 105-118. This follows up on his earlier work “Theodore Thomas, George P. Upton, and Franz Liszt: Educating XIXth-century Chicago to and through the ‘Music of the Future’,” in: Franz Liszt: Un musicien dans la société, ed. by Cornelia Szabó-Knotik, Laurence Le Diagon-Jacuin and Michael Saffle (Paris: Hermann, 2013), 209-224.

Priscilla Walton (English) will soon publish “Down the Rabbit Hole: The Bostonians and Alice James.” The Canadian Review of American Studies,  Special Issue: In Memorium of Robert K. Martin. Forthcoming:  2015.

Andrew M. Johnston (History) gave a paper entitled “American sociologists and international sociology during the First World War,” at a conference called The Academic World in the Era of the Great War, at Trinity College, Dublin. He also presented two conferences papers in May and June: “The Theory and Practice of Gender in International History: what transnational feminists have taught me,” at the Berkshire Conference on the History of Women, University of Toronto, Toronto, May 25, 2014; and the second, “Henri Bergson and the Ontology of Diplomacy,” for a panel entitled Ideas in Transit: Intellectual Exchanges as Foreign Relations at the Turn to the Twentieth Century, at the Society for Historians of American Foreign Relations Annual Meeting, Lexington, Kentucky, 20 June 2014.

Priscilla Walton (English) presented a paper at the Canadian Association of American Studies conference at the University of Waterloo. It was entitled “Down the Rabbit Hole: Illness, Leisure, and Authorship.”

Kanta Marwah (Economics) received the University’s highest non-academic honour, a Founders Award, at the June Convocation. These awards recognize and pay tribute “to those individuals who have made significant contributions to the advancement of Carleton University through their dedication, generosity and commitment to the values of the university.” Dr. Marwah is a Distinguished Research Professor and Professor Emeritus of Economics who joined Carleton in 1967 as the first female professor and the Economics Department’s first female full professor in 1977. She has also been a member of the RCAS since its founding in 2010. The Centre offers Kanta our warmest congratulations for this tremendous achievement!

Ian Lee (Economics) published two OpEds. In the Ottawa Citizen (December 28, 2012), he wrote on “Obama and Boehner: so close, yet so far apart.” The second is slightly older, but still relevant on both sides of the border: “If Canada can privatize …” The New York Times (December 7, 2011).

Priscilla Walton (English) and her co-author, Bruce Tucker, have just published their new book, American Culture Transformed:  Dialing 9/11, with Palgrave Macmillan (London:  2012). “American Culture Transformed offers an interesting sampling of the cultural landscape in America after 9/11. The authors provide compelling snapshots of iconic moments and figures from the military, economics, the arts, and politics. The book will stir memories and make us uncomfortable again.”
– Mary Poovey, New York University

Andrew M. Johnston (History) presented “Rebuilding internationalism in Europe: American women, feminist pacifism, and the Women’s International League for Peace and Freedom, 1919-1923,” at the annual meeting of the Society for Historians of American Foreign Relations in Hartford in June. The paper was part of a panel chaired by the Sorbonne Nouvelle’s Serge Ricard, with co-presenters Claire Delahaye (Tours) and Daniela Rossini (Rome III) and commentary from Carol Chin (Toronto), entitled Women in a Post-Revolutionary World, 1919-1929.