Each event was well attended with amazing feedback from those who came out. We thank each of these women for sharing their work along with their insights. Everyone who attended left inspired! 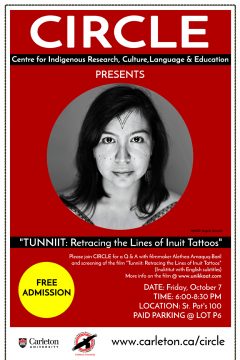 16.10.07 Screening of TUNNIIT: Retracing the lines of Inuit tattoos followed by Q & A with director Alethea Arnaquq-Baril

“A young woman is on a journey to revive the ancient Inuit tradition of face tattooing. Inuit tattoos have been forbidden for a century, and almost forgotten. Alethea Arnaquq-Baril struggles to find out all she can before she is tattooed herself.

She has met serious resistance from some of her fellow Inuit. However, a number of brave elders are willing to talk about the tattoos, and the massive and sudden cultural changes that caused their decline.”

For more information on “Tunniit” and other films by Alethea visit www.unikkaat.com. 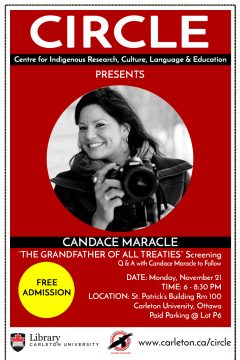 16.11.21 Screening of The Grandfather of All Treaties followed by Q & A with director Candace Maracle

“The Grandfather of All Treaties or the Two Row Wampum, is considered the most important diplomatic instrument in First Nation’s history. Wampum belts often accompanied written treaties between two nations and were created in the spirit of friendship. The Two Row Wampum consists of two rows of purple beads separated by three rows of white. The white symbolizes the river of life or the land that we all now share. The two purple rows symbolize the Haudenosaunee and the Europeans traveling side by side, never interfering with each other’s journey. Subsequent agreements are predicated upon this one. Each nation recognized the other’s sovereignty and ecological stewardship was central to that co-existence. This documentary examines those central tenets and the Indigenous mobilization that is happening across North America as a response to not honouring this agreement and the power of the people to affect real change in the world.” 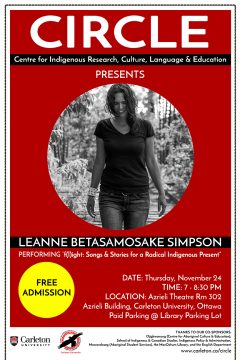 “Leanne Betasamosake Simpson is a renowned Michi Saagiig Nishnaabeg artist, musician, poet and writer, who has been widely recognized as one of the most compelling Indigenous voices of her generation.

Leanne’s RPM debut LP, f(l)light, is a haunting collection of story-songs that effortlessly interweave Simpson’s complex poetics and multi-layered stories of the land, spirit, and body with lush acoustic and electronic arrangements, and claims a unique space in contemporary Indigenous music and performance.

The album is a haunting, powerful hybrid of words, songs, and perspectives. From the gentle invocation of other forms of life offered in songs like “Road Salt” and “The Oldest Tree in the World”, to the dissonant sonics of “Caribou Ghosts and Untold Stories” and the pulsing, hypnotic rhythms of “Under Your Always Light”, Simpson’s words reverberate within and between the sounds that surround them.

f(l)ight is the sound of ancestral memory and present possibility unfolding toward a horizon of freedom.”