Confronting climate change through the humanities and social sciences

In April 2017, I stood on the bank of the Rideau River as it raged past Carleton’s campus. I wasn’t the only one. Many people had come out to see this strange phenomenon of above average water levels and forceful currents. The river had already begun to spill over the edges and flood sections of Brewer Park. Further north, the river could not be contained. Irregular rainfall coupled with melting snow contributed to both the Ottawa and Gatineau rivers rising to unprecedented heights and submerging homes in the process. As the rivers slowly receded, leaving a trail of contaminated basements in their wake, discussions began to emerge regarding preventive measures. The visible and long-lasting effects of the crisis made climate change an urgent topic of conversation. 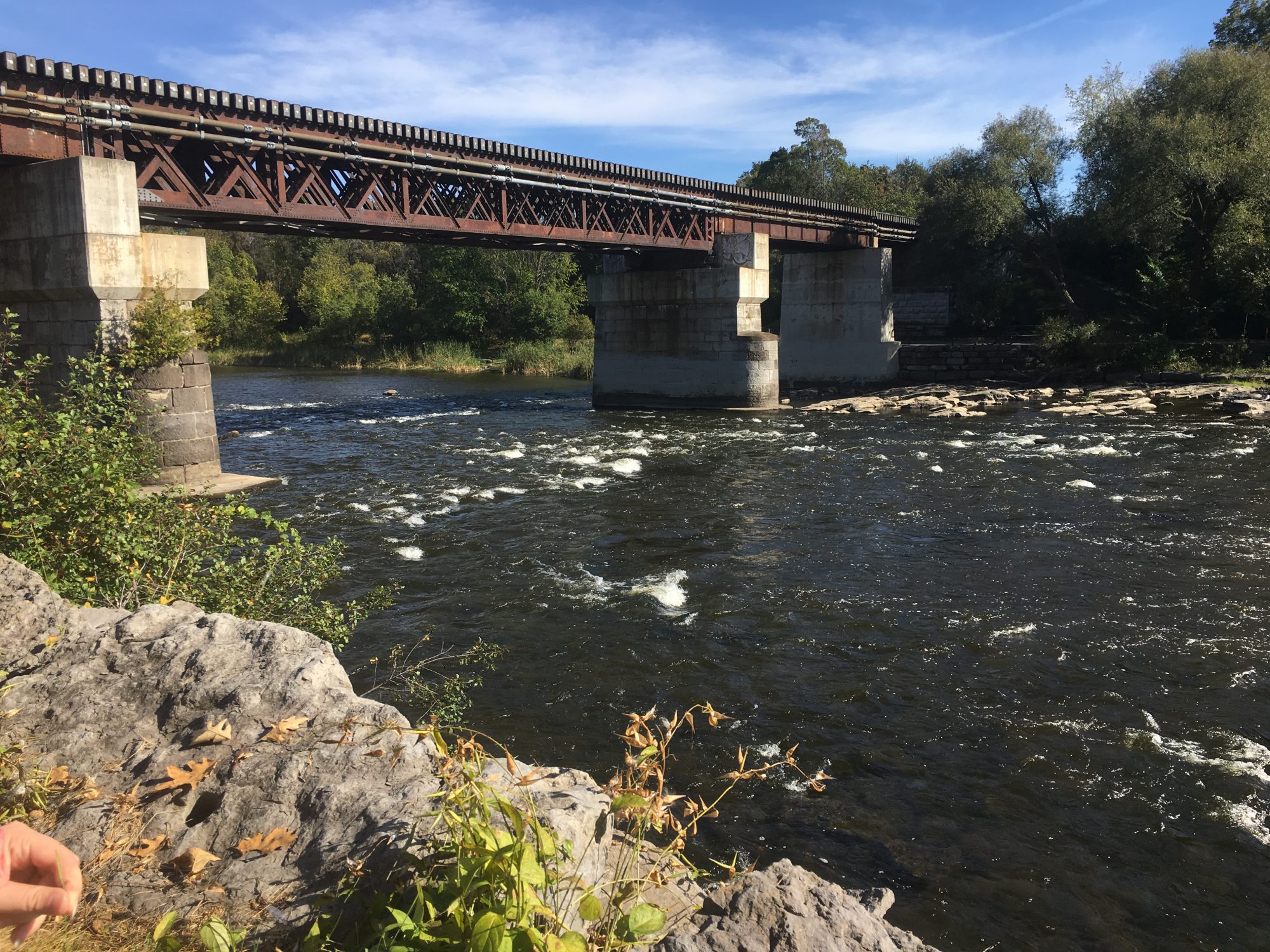 The Rideau River as it flows through the Carleton campus.

I found the flood and our responses to it fascinating. At the time, I was a fifth year Ph.D. candidate writing on ecology. My interests were, and still are, focused on how we form narratives around the environment. Specifically, I am interested in how we can use these narratives to rethink bodies within environments in crisis, as well as to rethink the way we speak, imagine, and frame the non-human world. Although my focus was literary modernism, women authors, and material ecocriticism, I wanted to expand my focus and actively participate in discussions on climate change that spoke directly to our contemporary crisis. How could my research on literature contribute to the debates surrounding climate change? By this time, I had discovered the Carleton Climate Commons, an organization that brings together faculty, graduate, and undergraduate students to discuss climate change issues in relation to the humanities and social sciences. 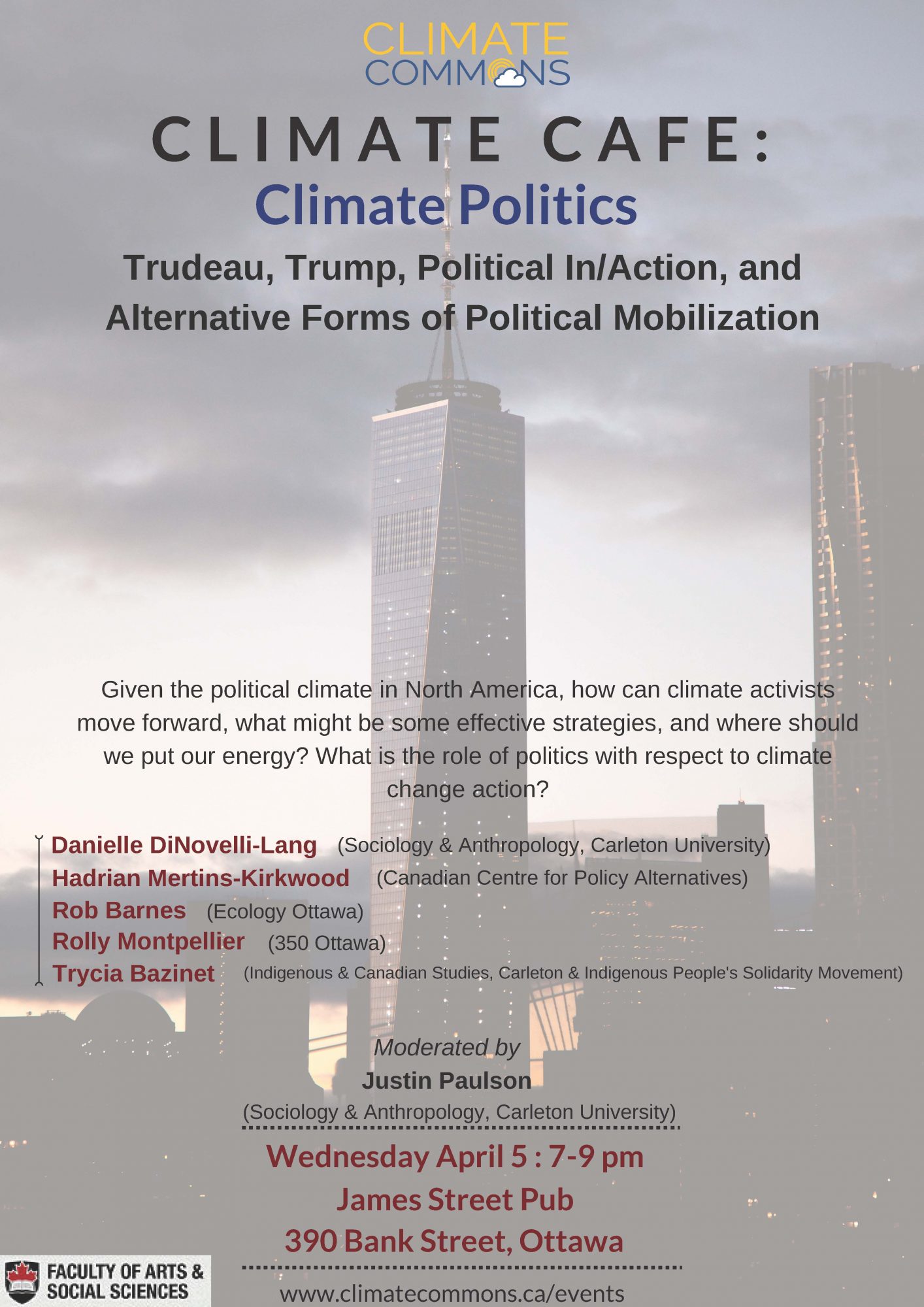 The Carleton Climate Commons was initiated by Dr. Barbara Leckie, professor in the Department of English Language and Literature at Carleton University. In September 2014, she launched a forum through which scholars, administrators, and students could share academic work, ideas, and articles on climate change. Commenting on what motivated her to begin the group, she states, “The university has long been the place our society carves out for addressing issues of vital importance. Climate change is one of those issues. And yet in our increasingly specialized world, the solution to climate change is often perceived to come from science or government or some combination of the two. But I think the Humanities have a role to play here too.” Initially, fifteen faculty members and graduate students met in Professor Leckie’s living room to discuss the group’s potential. The group has since grown to almost two hundred members.

The CCC is unique and perfectly suited for Carleton University. Known as Ottawa’s “Capital University,” Carleton is a verdant campus. The university website provides an aerial view of the luscious green fields and thick wooded areas that surround the campus. The Rideau River and the Rideau Canal skirt its buildings. This pastoral location seems like an ideal site to inspire innovative thinking and research. However, it is also a site of waste and pollution. Both the canal and the river are heavily contaminated. The large population of students and their consumption habits generate enormous amounts of waste. Despite its active role in waste production, Carleton draws awareness to these issues. If you scroll down on the “About Us” section of the university’s website, you can peruse Carleton’s sustainability strategy. Its commitment is to “protect and strengthen our physical and social environments.” It does so through waste management services and reducing emissions. However, this strategy seems to focus on infrastructure and policies to reduce energy consumption. It does not consider how different disciplines, let alone the Humanities, can actively participate in these efforts.

The university’s focus on sustainability positions Carleton as a place that addresses “issues of vital importance to all of society.” Moreover, its close proximity to the Parliament buildings makes it possible to wed cutting-edge research with government policy. The question then becomes: how can the Humanities interact with the government’s debates on greenhouse gas emissions and the Kinder Morgan Pipeline? How can we bridge the gap between political responses to climate change and innovative research in the Humanities?

The Carleton Climate Commons does not position the Humanities as an alternative to scientific and governmental debates on our changing climate and its drastic effects on our planet. Instead, it positions itself as an interdisciplinary approach that seeks to establish a dialogue between different disciplines by means of a number of strategies. Since its early stages as the “Humanities Working Group on Climate Change,” the CCC has organized a series of events. In 2014, it launched a documentary film series on climate change. During this past year, it has held several Climate Cafés and a monthly Reading Group. The readings focus on theoretical texts such as those of Bruno Latour and Donna Haraway that explore how the Humanities intervene to our current climate change crisis. 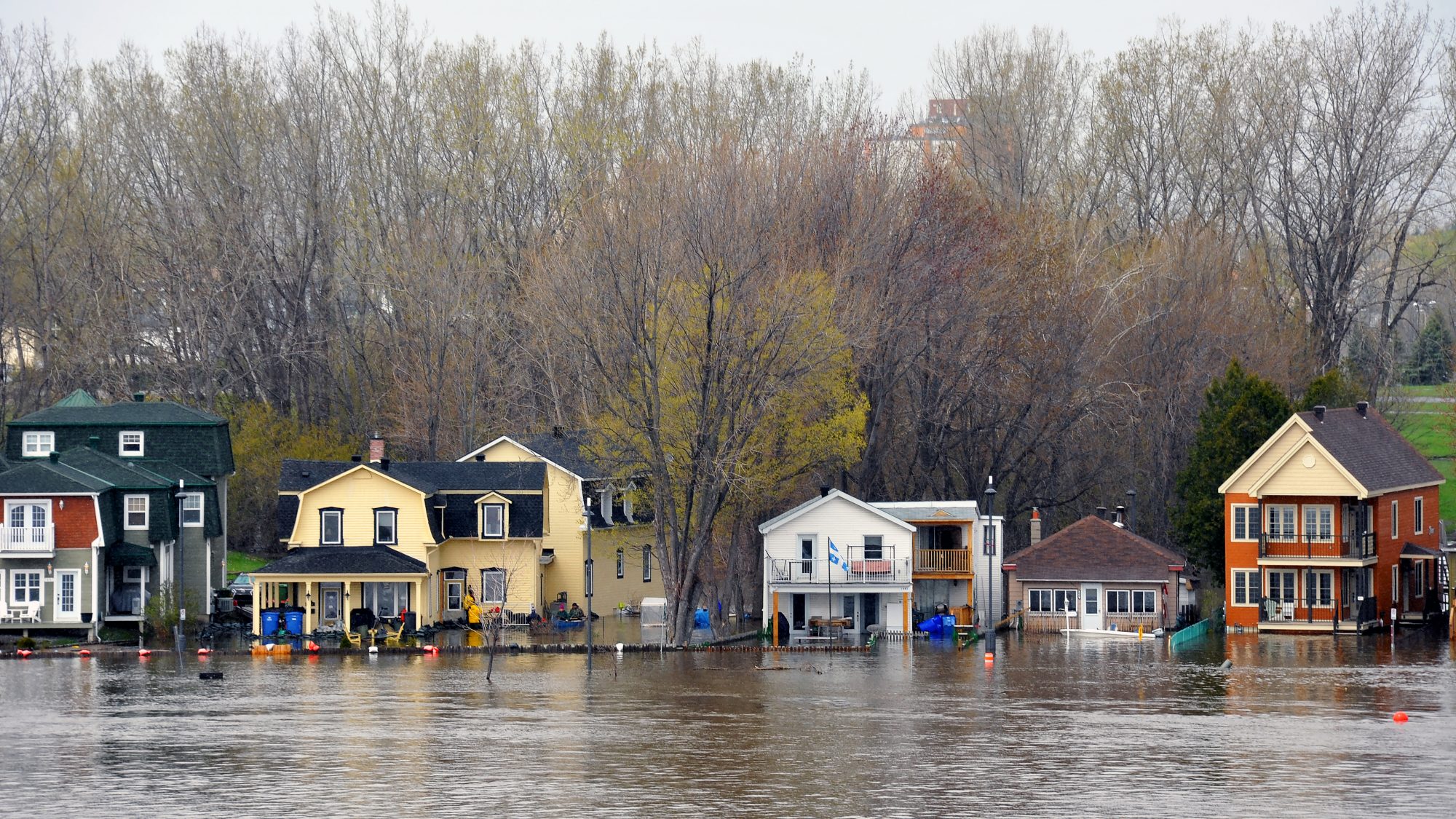 Paul McKinnon Gatineau, Canada – May 8, 2017: The severe flooding on the Quebec side of the swollen Ottawa River. Pointe Gatineau is one of several areas in North America that has suffered flood conditions.

Bridging the gap between theoretical frameworks and practical initiatives, the CCC raises many questions: How can concerns about the environment and climate change affect pedagogical strategies in the university? How can we inspire discussion on the environment in the classroom and outside of the classroom? How can an environmental focus bring more Indigenous content into the classroom? The group thus considers how we can change the structure of academia in order to make climate change and environmental issues an integral part of its institutional mandate.

These conversations, however, are not isolated within the walls of the university. The CCC actively strives to establish a conversation with the public. After all, the initiative to curb the effects of climate change is not an isolated project. It requires the active participation of communities. The CCC has organized a number of events in pubs and coffee shops throughout the city. This outreach to the community is a testament to the growing concern of the public to mitigate the impacts of climate change. Each event is well attended and the public responds enthusiastically to the discussion. This enthusiasm and involvement speak to how important the topic of climate change is as we make it an urgent and crucial component of our everyday conversations.

The CCC is currently planning a series of events for the fall. These include an Indigenous Issues Climate Café and a film series organized by a visiting scholar from France, Kyveli Mavrokordopoulou, who focuses on art that attempts to respond to nuclear temporalities. Finally, the CCC is planning an undergraduate conference in partnership with the Institute of African Studies at Carleton University. The aim of the conference is to conceptualize environment and climate change in terms of how they challenge us to imagine alternative futures for the African continent in geographic, political, economic, technocultural, and epistemological terms. 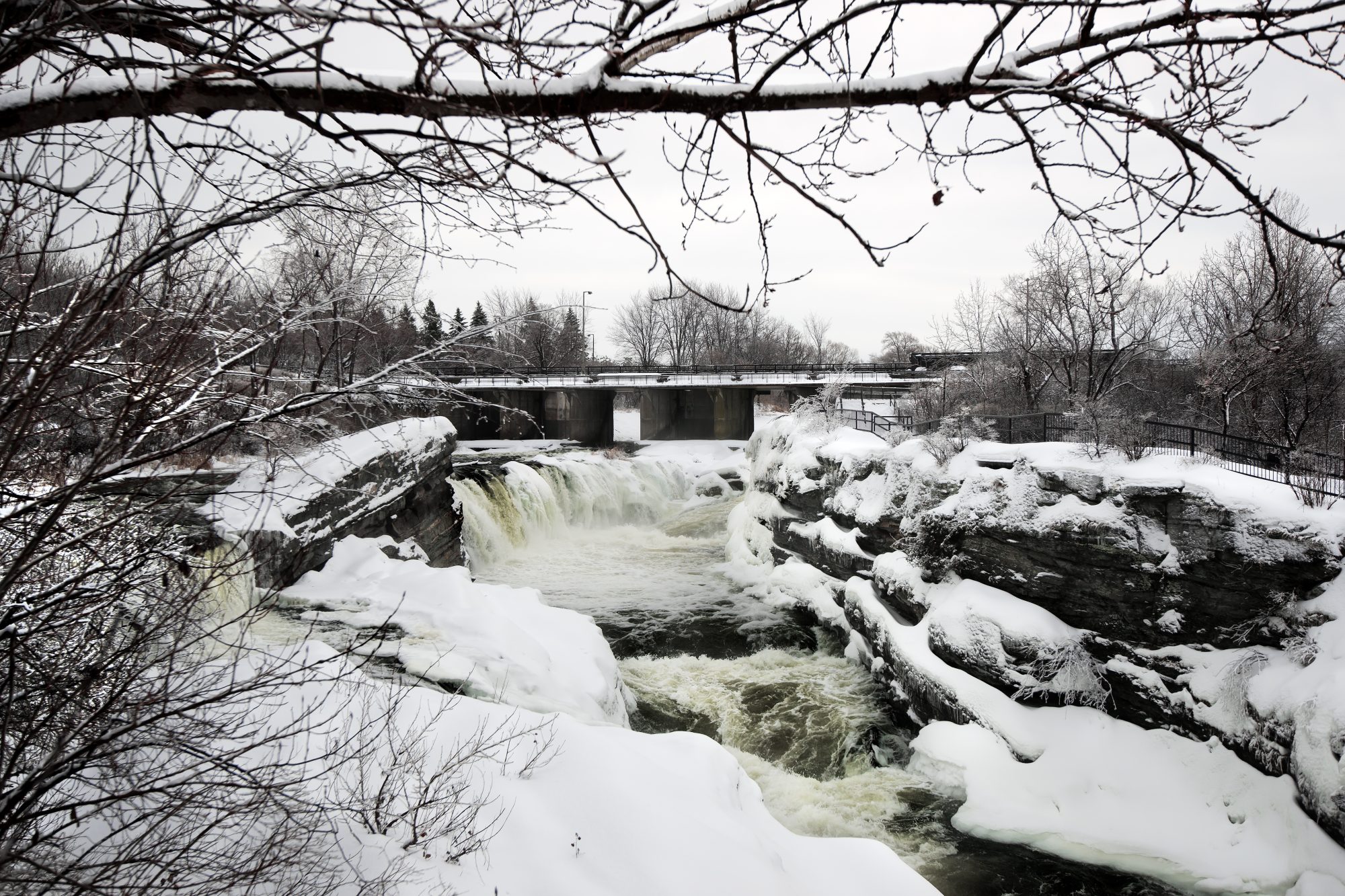 A frozen Hog’s Back Falls, steps away from the Carleton Campus.

For more information on the conference, please contact the organizing committee at: communications.iasconference@gmail.com.

Alternatively, if you have any questions about the CCC or wish to become a member, please visit their website: https://carleton.ca/climatecommons/.