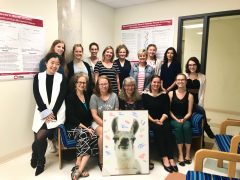 Does language matter for math learning? Many children in Canada learn mathematics in a second language; that is, the language they use at school for math is different than the language they speak at home. Children in French Immersion programs, children from homes where a different language is spoken, and children who have immigrated from a country where the school language is not English or French may all be in this situation.

The Language Learning and Math Achievement project involves researchers from Ottawa, Montreal, Winnipeg, and Northern Ireland. Children in grades 2 and 3 are completing measures of math performance, math-specific vocabulary knowledge, math symbol understanding, and working memory. The goal of the project is to understand how language influences the ways in which children learn math.  This project is funded by the Social Sciences and Humanities Research Council of Canada

In some previous work, we explored the benefits of game play and adding structure to the English number naming system.

Counting Ability in Preschool Children: Numerical Board Games as an Intervention

Roles of the Number Naming System and Home Experiences in Numeracy Development: Comparison of Chinese and Turkish.

For more information on the development of numeracy skills in children please visit the Encyclopedia of Language and Literacy and refer to the topic of numeracy.

What was Count Me In?

Count Me In was a research project funded by the Social Sciences and Humanities Research Council of Canada (SSHRC). Groups of children were assessed annually from 2004 until the final data collection session in the spring of 2007. We believe one of the predictors of success to be the development of basic counting and number skills. Our longitudinal model shows that young children can access multiple pathways to sucess in mathematics. The model is described the Child Development paper below.

When and How Do We Introduce Number Concepts in Child Care?

This study was conducted by the Canadian Child Care Federation (CCCF) in partnership with the team who brought you Count Me InThe goal of this research project was to gather information about the early numeracy and literacy knowledge, practices, and beliefs of early learning and child care (ELCC) practitioners. A web survey of Canadian Child Care Federation members and recruiting at two major child care conferences generated 768 respondents. The main findings and recommendations are discussed in this Executive Summary Report.

Jo-Anne LeFevre from Carleton University and Jeff Bisanz, from the University of Alberta, led the Count Me In project. They have been conducting research together on mathematical cognition since 1979. They have published the results of their studies in many journals and have contributed to chapters in a number of books.

In order to ensure the success of this study, Jo-Anne LeFevre and Jeff Bisanz have gathered a team of researchers from across Canada , all of whom bring specific skills and knowledge to the project. Members of the Count Me In Project represent Carleton University and Trent University in Ontario, the University of Winnipeg, and the University of Alberta.