The Year Ahead: An International Security, Intelligence and Defence Outlook for Canada for 2018 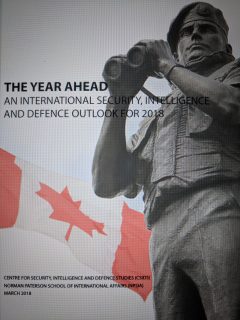 On December 7, 2017, several academics, experts, and practitioners from Canada and the United States, along with an audience of over one hundred and forty civil servants, academics, students, and members of the public were invited to Canada’s War Museum in Ottawa to reflect on the challenges for Canada in the immediate future on four themed panels: 1) hot spots around the world and their impact on Canada; 2) challenges for Canada’s ongoing missions abroad; 3) managing the Canada-US relationship; and 4) new horizons: cyber-warfare and cyber-security.

As originally conceived by the former Director of CSIDS, Dr. Rob McRae, the objective of this annual conference (first held in 2015 and then in 2016) is to provide an opportunity for experts from academia and the public sector to have a conversation about international security challenges that the Canadian government and its closest allies are likely to face in the coming year. The four themes covered during the conference represent some of the most pressing issues that will affect Canada and that require new foreign, defence, and intelligence policies implicating several agencies, allies, and levels of government. This report summarizes what was discussed during this wide-ranging conference.

The Year Ahead: An International Security, Intelligence and Defence Outlook For Canada For 2017 On 8 December 2016, eighteen academics, experts and practitioners from Canada, the United States (U.S.) and Mexico along with an audience of over one hundred and forty civil servants, students and members of the public were invited to Canada’s War Museum to reflect on the challenges for Canada in the immediate future on four, themed panels, namely: 1) Hotspots- representing conflicts and international crises around the world that could have an impact on Canada; 2) the future of the United Nations (UN) and Canada’s role within it; 3) the world after the U.S. elections in 2016; and 4) new horizons: space, the cyber-world and the Arctic. These themes represent some of the most pressing issues that will affect Canada and that require new foreign, defence and intelligence policies implicating several agencies, allies and levels of government. Discrete events, such as the U.S. elections or Brexit, as well as continuous events, such as changes in the cyber-world, tend to create extreme and reactive foreign policies since there is rarely time to unpack and reflect on the impact for Canada. This report provides a summary of the advice, cautions and unanswered questions raised during the workshop. Never has the advice of James Eayrs been more prescient; Canada’s foreign, defence, security and intelligence policies must seek to find the middle way between idealism and hard-headed realism.[1]

[1]  In 1965, James G. Eayrs (Professor in the department of Political Economy at the University of Toronto) was asked to give the Alan B. Plaunt memorial lectures at Carleton University.  His lectures were entitled “Right and Wrong in Foreign Policy”.

The Year Ahead: An International Security, Intelligence and Defence Outlook For Canada For 2016 The conference on “The Year Ahead: An International Security and Intelligence Outlook for 2016” was held at the Canadian War Museum on December 4th, 2015. The conference was organized by the Norman Paterson School of International Affairs and the Centre for Security, Interlligence and Defence Studies, both at Carleton University.

The conference was a great success, with over 150 people attending, including public servants, academics and students, representatives of the private sector, diplomats, and the interested public.

The intent was to create an opportunity for both public servants and academic experts to discuss the international security challenges that would be facing the Canadian Government and our closest Allies in 2016. It was hoped that this would be the start of an annual dialogue seeking to anticipate events requiring policy work. A number of themes emerged in the course of the presentations and discussions that are summarized in this report on the conference. However, there are some cross-cutting questions that require further consideration:

The summary that follows only partially captures the richness of the discussion at the conference. None of the statements in this summary should be attributed to any particular speaker. The intent is simply to highlight some of the issues raised, as a reminder for those who attended, and as food for thought for those who were not able to participate.