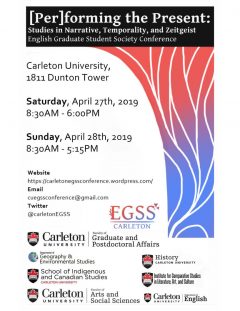 This conference aims to explore the role that prestige plays in the contemporary literary marketplace. James English’s The Economy of Prestige, Gillian Roberts’s Prizing Literature, and Lorraine York’s Literary Celebrity in Canada are prominent examples of recent studies that consider how literary prizes—and debates about prize culture—confer and circulate prestige. English notes that prizes are both “a means of recognizing an ostensibly higher, uniquely aesthetic form of value” and “an arena in which such value often appears subject of the most businesslike system of production and exchange.” For example, when Johanna Skibsrud’s novel The Sentimentalists won the 2010 Giller Prize its independent publisher was forced to sell rights to a company that could handle the increased demand for copies. The ways in which authors can become prestigious have proliferated in recent years. A favourable review or interview in a respected publication, being endorsed by another renowned author, or having one’s work selected for a book club broadcast on radio or television—these are just a few of the paths to literature’s elite echelon of celebrated writers. Writers who reach such heights—Toni Morrison, Junot Diaz, and Margaret Atwood, for example—have moreover used their prestige to draw attention not just to their own work but to other writers and to particular political causes. In recognition of the many forms and sources of prestige that have not yet been significantly studied, as well as furthering current studies on prestige, participants in this conference will consider how prestige is generated and managed, what it is used for, and how it is contested.