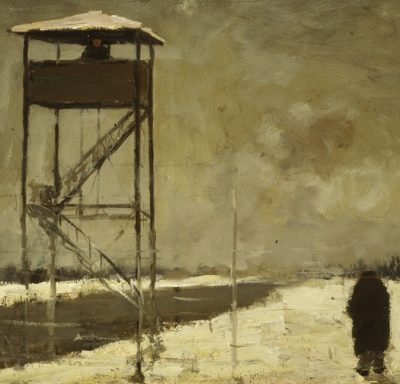 Professor Sarah Casteel delivered two invited lectures this spring. The first, the Arnold Band Distinguished Lecture in Jewish Studies, was presented at UCLA in early May. The talk was entitled “Global Itineraries of Holocaust Memory: The Jewish Caribbean and Nazi Persecution in Literature and Art.” In this talk, Prof. Casteel examined how, during the Second World War, the Caribbean provided safe haven to Jewish refugees from the Nazis. Meanwhile, Caribbean expatriates living in Europe found themselves caught up in the war and, in some cases, imprisoned. The talk revisited these entangled wartime histories through the lens of art and literature. The work of Caribbean artists and writers traces wartime journeys between Suriname and Belgium, Poland and Haiti, to reveal unexpected intersections between Jewish and African diaspora experience. In their work, the Caribbean emerges as a site where not only Black and Jewish but also Sephardic and Ashkenazi memories and identities converge.

The second lecture, “Hidden Histories: Surinamese Artist Josef Nassy’s Visual Diary of Nazi Persecution,” was given at KITLV: Royal Netherlands Institute of Southeast Asian and Caribbean Studies in Leiden, Netherlands in early June. In her talk, Prof. Casteel examines the larger history of the Jewish Caribbean through the testimonial art of Surinamese painter Josef Nassy, who was arrested by the Nazis while living in occupied Belgium and interned from 1942-45. The paintings and drawings that Nassy created during his internment provide a unique visual record of black victims of the Third Reich.

Prof. Casteel has also been awarded a Visiting Fellowship at the Mandel Center for Advanced Holocaust Studies at the United States Holocaust Memorial Museum in Washington D.C. for 2019-2020.