What is it like to study English at Carleton? Get the complete story, month-by-month, from our student blogger and read the archived blogs of English BA graduates. 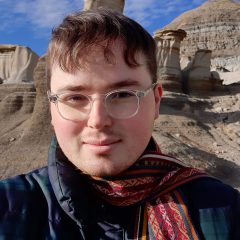 Sam Bean is a first-year Master’s Student in English Literature with a Climate Change Specialization. He is a free-floating writer who has worked for the Charlatan, a dubious tech startup and the Ottawa Art Gallery Communications team. He also writes poetry in his spare time. He is from Mississauga but insists that everyone back home calls it ‘M-Town.’ [read more] 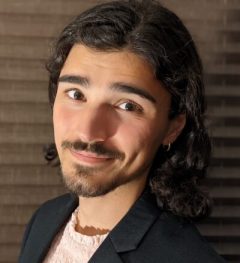 Noah Bendzsa is a fourth-year Honours English student. They studied mathematics and chemistry, successfully and unhappily, until discovering that they could study novels and short stories instead. Although they sometimes miss hearing about “Gödel and His Problems,” they have not looked back. In their spare time not spent reading, they enjoy going for walks and hikes. They are a would-be Peakser, so long as they don’t wash up “wrapped in plastic.” [read more] 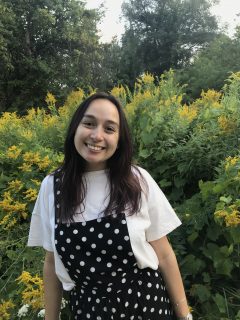 Jaclyn Legge is a 3rd or 4th-year student returning to full-time student life after completing Co-op. She spends her free time calling to the muses for inspiration in her writing, drawing, and shower-dancing routines. Her poetry has been published in Bywords.ca. No, she doesn’t want to be a teacher; she considers herself a student in every aspect of life. [read more] 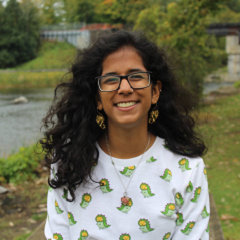 Manahil Bandukwala is a fourth-year English major in the Co-op Program. She enjoys writing and painting. Her chapbook of poetry and illustrations Pipe Rose was published in 2018. She is currently an editor of In/Words, Carleton’s in-house literary magazine. [read more] 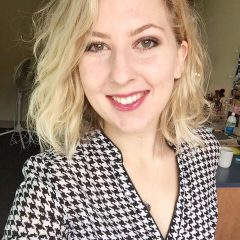 B.A. Honours English, with a concentration in Creative Writing and a minor in Women’s and Gender Studies, 2021

Emily Coppella is an English major (who is currently contemplating a Women’s Studies or Sociology minor.) She devotes her time to writing for Spoon University, doing yoga and becoming more familiar with the Carleton community. She loves debating whether the book or the movie was better and is constantly running out of tea bags. She is anxious to enter into the Creative Writing Concentration and a future co-op position. [read more] 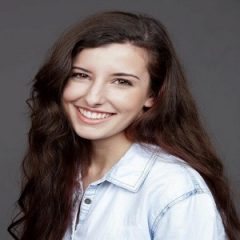 Amanda Seed is a fourth-year English Language and Literature major with a minor in Greek and Roman Studies. She is also enrolled in the MA Accelerated Pathway Program and hopes to pursue grad studies at Carleton. She is a piano teacher, a Canterbury Trebles choir member, and a mentor for the FYC program.  [read more]. 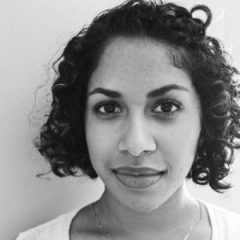 Paige Pinto is a fifth-year Humanities and English major and is currently a co-president of the English Literature Society. She is interested in Romantic poetry and has something of a love-hate relationship with Jane Austen. She spends most of her day drinking coffee and thinking about fictional characters. One of Paige’s great passions is the discussion and sharing of creative writing. [read more] Erin Shields completed her undergraduate honours degree in English. As of Fall 2017, Erin is attending UCLA law school on full scholarship. Erin is especially interested in language and the way ideas about narrative can be applied to everyday experience. She enjoys reading (obviously), tea (because she is a proud cliché), travel (she packed her suitcase post-graduation and doesn’t plan on staying put until she must), music (which she studied seriously for a number of years), and peanut butter (all-natural, salted, creamy.)  [read more] Olivia Polk is graduate of the English literature program at Carleton currently working towards an MA in English at McMaster University, and intends to write a thesis on the works of Miriam Toews. She served as the department’s undergraduate blogger for the 2014-2015 school year, though she is most comfortable hunkered over a precariously tall pile of books in the MacOdrum library, well into her third cup of coffee. Topics of her posts include: the Ottawa Writers’ Festival, the weird and wonderful world of slam poetry, her enduring preoccupation with the novelist Miriam Toews, performance anxiety, and grammar: why English majors love it and linguists hate it.

In her other life, she has had the privilege of serving as a child and youth worker for local health and resource centres in Ottawa, and also worked as a peer helper with the Bounce Back and First-in-Family programs here at Carleton.   [read more] Siobhan Doody completed her undergrad degree in English, with a minor in History at Carleton. She was born and raised in Ottawa, but left the city for one semester in third year, when she studied in Lyon, France.  While abroad she blogged about her experiences and developed a passion for the online literary world and continued to write for the department in her fourth year  as the English undergrad blogger. Siobhan is continuing her studies with a Masters of Arts in the English department at Simon Fraser University.  [read more] Marcus was born and raised near Saint John, New Brunswick. Like most people he wanted to be a rock star until he was 16, when he realized that there aren’t nearly enough stages in the world for everyone who wants to make it big. Not letting this bitter defeat get the best of him, Marcus changed his priorities and began reading like a deranged fool. His sanity was questioned, but he seemed happy enough so we all just let him alone. If you really wanna’  get him going ask him about the following subjects: Bob Dylan, Literary Modernism, The Daily Show with Jon Stewart, the professional relationship of Martin Scorsese and Robert DeNiro, etc, etc. Marcus graduated from Carleton with a B.A. Hons. in English in 2013. He is currently pursuing an MA in English at the University of Toronto.  [read more]