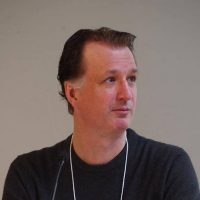 David Stymeist’s debut poetry collection, The Bone Weir, was published by Frontenac House in 2016 and was shortlisted for the Canadian Author’s Association award for Poetry. His poems have appeared in numerous magazines, including The Antigonish Review, Prairie Fire, Dalhousie Review, and The Fiddlehead.

He grew up as a non-indigenous member of a mixed family on O-Pipon-Na-Piwin Cree Nation, is the editor and founder of the micro-press, Textualis, and is the current president of VERSe Ottawa, which runs VerseFest, Ottawa’s annual poetry festival.