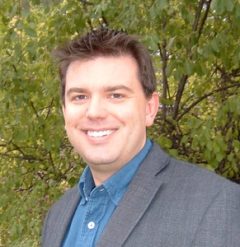 Jeff Manthorpe was born in Belleville, Ontario in 1976. In September of 1994 he started a B.Sc. in Bio-Medical Science at the University of Guelph but transferred to the Chemistry program in his second year. After carrying out undergraduate research with Professor Gordon Lange, he graduated on the Dean’s List in the spring of 1998.
Upon completion of his B.Sc., Professor Manthorpe moved to McGill University in Montréal, Québec to carry out post-graduate studies with Professor James Gleason. His research involved the development of a powerful new general method for the stereocontrolled formation of α,α-disubstituted enolates. Subsequent asymmetric alkylation of these enolates led to the formation of quaternary carbons with high levels of stereopurity. An extremely efficient second-generation system followed and is now commercially available from Aldrich. Other students in the Gleason group continue to investigate this chemistry.
After completing his doctoral studies, he moved to the Eidgenössische Technische Hochschule Zürich (Swiss Federal Institute of Technology Zurich) where he was an FQRNT postdoctoral fellow with Professor Erick M. Carreira. Whilst at the ETH he worked on the asymmetric synthesis of an analogue of the clinical antifungal agent amphotericin B and developed a powerful new directing group for the synthesis of β-glycosides.
In the summer of 2006 he took up an academic position at Carleton University, where his research focuses on the development of new asymmetric methodology and applications to biologically relevant molecules, both natural and unnatural.
When not in the lab he enjoys cooking, cycling, playing hockey and listening to music.