Home / News / Ruminations on artists, activists, and the power of creative imagination

Ruminations on artists, activists, and the power of creative imagination

I often describe myself as working “At the Intersection,” as if it is an actual physical place in the world. I imagine this Intersection to be alternately a bustling port where a river meets the sea, an urban crossroads at the border of four countries, and a desert tent with the four flaps open to each direction. I am a mixed-race person, and maybe this explains why I like to mix metaphors. It’s also why I like to create opportunities to bring different people together, and I tend to do this in all the facets of my life and work. This year, while also teaching at Carleton in the Dept. of English, I have been Artist-in-Residence with the English Theatre department at the National Arts Centre, and I have had the opportunity to work with students, teachers, artists, and members of the public. I have especially enjoyed the opportunities to make links between my creative practice as a playwright and my training as an educator and scholar. 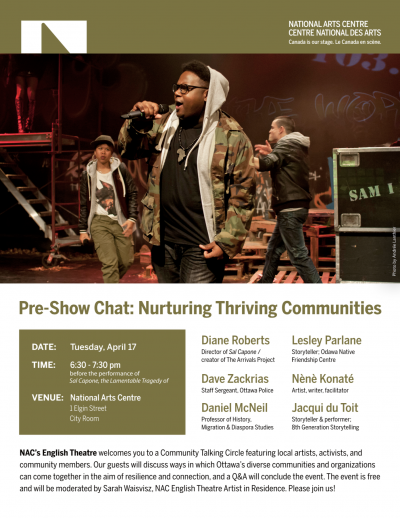 One of the things I am most proud of is a series I launched of auxiliary, audience-engagement events. The “Pre-Show-Chats” have as their core mission my personal interest in connecting audience members and community members with artists and their creative work. I want people to have the chance to deepen their connection with the work; to see that it has social and political relevance; and to have a chance to engage critically with the work, rather than thoughtlessly consume it. I want people to recognize that they have a role in the process of creation and production and, hopefully, to see themselves reflected in the work.

On Tuesday April 17th, I had the great honour of bringing together 6 extraordinary panelists for a Community Talking Circle on the theme of “Nurturing Thriving Communities.” This Talking Circle preceded that evening’s performance of Sal Capone, the Lamentable Tragedy of, by Omari Newton, and it was part of the Pre-Show-Chat series.

I knew that with Sal Capone many people who otherwise do not think the theatre speaks to them would finally see themselves onstage. I knew that there would be a demand in Ottawa for Sal Capone’s hip-hop aesthetic, driving rhythms, high-octane performances, and deeply relevant portrait of racial discrimination. I knew that this show could be a potent catalyst and a potent elixir. For all those reasons and more, I thought it would be a powerful gesture to structure the Pre-Show-Chat as a Community Talking Circle, and to bring together a panel of artists and activists from different fields. The participants were 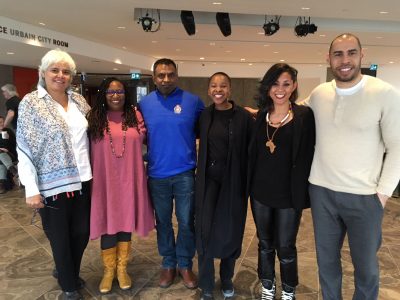 I couldn’t have asked for a better outcome. The audience members were treated to a rich, meaningful conversation about both the difficult dynamics of race relations in Ottawa and the generative work being undertaken in our city. The participants shared stories of their own challenges as well as their thoughts and hopes for imagining possible worlds and creating positive change. A particular joy for me was to witness the pleasure that the panelists felt simply for having been brought together in this way, and to see, as well, that the audience was absolutely riveted by what was being shared. The conversation was nuanced and energetic: Jacqui du Toit articulated why cultural inheritance and pride depends on storytelling; Dave Zackrias gave frontline testimony about what it is like to be a police officer of colour; and Daniel McNeil offered a powerful call to arms about the ability of plays like Sal Capone to challenge the presumed legitimacy of our existing systems of power, authority and violence.

When my time as Artist-in-Residence comes to an end at the end of June, I will remember this particular Pre-Show-Chat as a standout example of what I know to be true: that artists and activists are the heralds of change, and that it is often in the realm of the creative imagination that we can explore and rehearse strategies for repairing our broken world.

Dr. Sarah Waisvisz received her PhD in English from Carleton University in 2014. Her dissertation examined themes of resistance, mixed-race identity, spirituality, the wide Black Atlantic, and human rights reckoning in Francophone and Anglophone Afro-Caribbean literature by women. Her solo play about mixed-race identity, Monstrous, premiered at Ottawa’s 2016 undercurrents festival and it has since been published in the journal alt.theatre. While Artist-in-Residence at the NAC, Sarah has been working on three new scripts including Double Helix, a multigenerational, multi-disciplinary, magical-realist epic about the legacy of slavery.