Cultural Ownership, Copyleft Romanticism and the White Possessive: Critical Reflections on the of the North Controversy 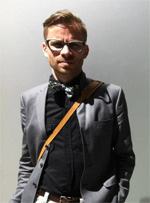 Bruno Cornellier, a Professor of Cultural Studies at the University of Winnipeg, will be visiting Carleton to discuss his current research, which critically explores the controversy triggered by screenings of Québécois filmmaker Dominic Gagnon’s found footage documentary of the North (2015). Prof. Cornellier’s talk on “Cultural Ownership, Copyleft Romanticism and the White Possessive: Critical Reflections on the ‘of the North’ Controversy” will be held in the ICSLAC Boardroom (room 201, St Patrick’s Building) on Monday, March 13, at 11:35 am.

The event is held in conjunction with ‘Perspectives on Interdisciplinarity in Cultural Theory’, a course in the Cultural Mediations PhD program, but all are welcome. To reserve a space, or receive further details about the talk, please contact daniel.mcneil(at)carleton.ca.

Title:
Abstract: This paper critically explores the heated controversy triggered by screenings of
Québécois filmmaker Dominic Gagnon’s found footage documentary of the North
(2015), in which he extracted from YouTube found clips of northern Inuit life and decay
that he exalted as aesthetic capital for southern cinephile jouissance. In conversation with
Goenpul scholar Aileen Moreton-Robinson’s theorization of the white possessive, I
propose that the vocabulary employed by many of the Montreal-based cultural
institutions and critics defending the film against Inuit dissent and protests—e.g. the
democratic imperative to protect artistic freedom and allow reasoned dialogue about
“difficult” texts to flourish in the public sphere—are inextricable from the type of
entitlements sustaining settler colonial claims to Indigenous lands—and to Indigeneity
itself—as part of a free and boundless Lockean common. I argue that such demand that
Inuit relinquish their anger and participate instead in a necessary deliberative and
intercultural public sphere, reflects the very structure of feeling of liberal colonial
settlement and reveals a certain cinephilia’s subjective and material investment in the
white possessive. I end this paper by reflecting on the ways Copyleft principles and the
recent return in critical theory to the Medieval concept of the commons, have been
simultaneously challenged and reinvested by some Indigenous artists, activists, and legal
scholars, in contrast with members of a settler cultural intelligentsia on the left who often
rely on these notions as justificatory devices for acts of cultural appropriation.

Bio:
Bruno Cornellier is an Assistant Professor of Cultural Studies in the Department of
English at the University of Winnipeg. He is the author of La “chose indienne”: Cinéma
et politiques de la représentation autochtones au Québec et au Canada (Nota Bene,
2015). He co-edited (with Michael Griffiths) the “Globalizing Unsettlement” special
issue of Settler Colonial Studies (2016), and co-edited (with Cécile Alduy and Dominic
Thomas) a special issue of Occasion on “The Charlie Hebdo Attacks and Their
Aftermath” (2015). His articles also appear (or are forthcoming) in Discourse, American
Indian Culture and Research Journal, Settler Colonial Studies, Canadian Journal of Film
Studies, London Journal of Canadian Studies, and Nouvelles Vues.