Floor vibration caused by human activity is an important serviceability consideration in design and performance evaluation of structures. The existing analysis methods for vibration assessment of floors are either too complicated and time-consuming for use in engineering offices or are based on empirical expressions with a limited application range. This study presents a rational simplified model that can accurately compute the peak acceleration of floors with a wide range of design parameters and frequencies under human-induced vibration. The model is developed by converting the floor system into an equivalent SDOF model using appropriate transformation factors and applying simplified forcing functions to simulate the walking load. The accuracy of the proposed model is verified against experimental tests and detailed FE analyses. To evaluate the application range of the proposed model, a comprehensive parametric study is also carried out on 26 floors that varied in terms of thickness, size, aspect ratio, support condition, and material type. The analysis results show that the proposed model can accurately assess the vibration response of both low- and high-frequency floors with different design parameters and structural systems. However, the existing simplified method provided in the AISC design guideline 11 significantly overestimated the vibration response of floors with natural frequencies and structural details outside its calibration range. 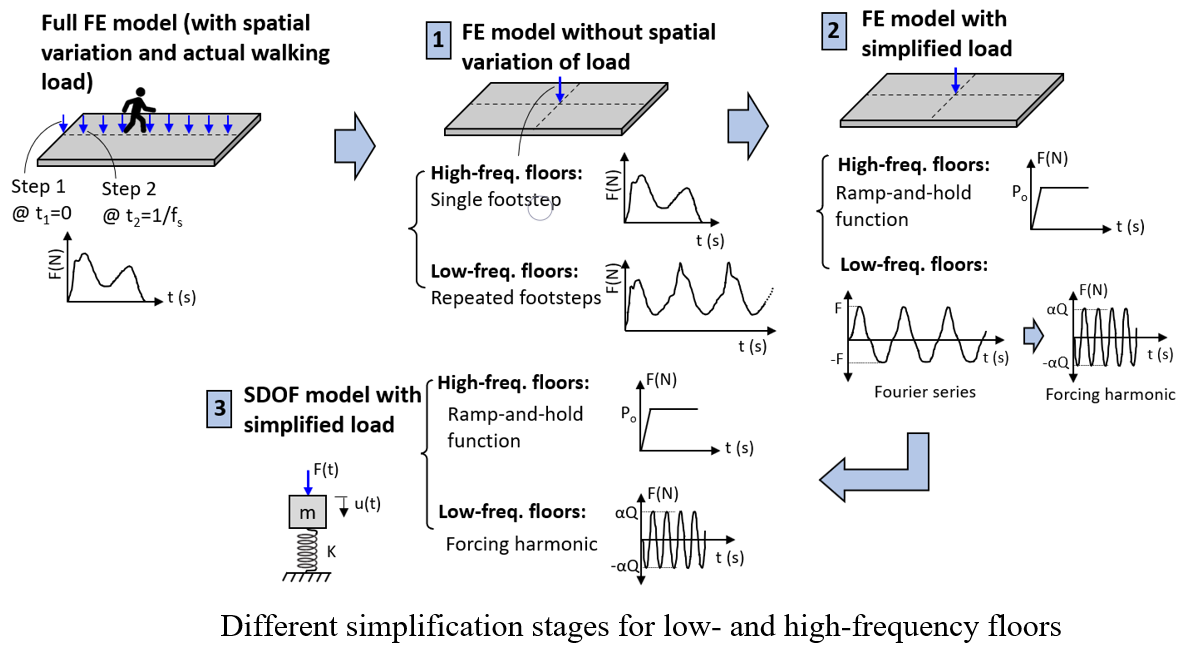 Construction of fast-built modular hospitals has gained significant attention in recent years, especially since the global pandemic. One important design requirement for hospitals that is critical for accurate operation of sensitive medical equipment is to control floor vibration. In this study, a standard design layout for modular hospitals is developed based on Canadian code requirements that can be configured for various emergency applications. The vibration performance of various floor systems designed for the proposed modular hospital is investigated using different analysis methods including a simplified rational method developed by the authors. It is found that conventional floor designs do not meet the strict vibration limits for hospitals when applied to modular construction. It is also demonstrated that the proposed analysis method can accurately predict the vibration response of floors with different structural details including those that are typically used in modular construction and have frequencies well beyond the application range of existing design methods. 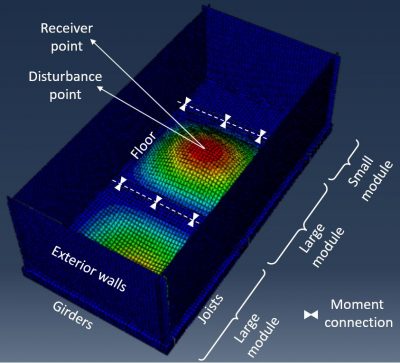 One of the most computationally efficient and practical modeling methods for nonlinear analysis of reinforced concrete (RC) structures is the lumped plasticity approach. Despite its popularity, the application of lumped plasticity method to analysis of shear-critical RC structures has been limited mainly because of the lack of a robust shear hinge model. This study presents a rational shear hinge model for nonlinear analysis of RC columns that is capable of capturing advanced mechanisms in reinforced concrete and axial-flexure-shear interaction effects. The model is developed based on fundamental equations of equilibrium and compatibility in conjunction with well-recognized constitutive material models enabling its application to a wide range of structures. The accuracy and application range of the model are assessed by analyzing a large number of shear-critical RC columns with various design parameters and comparing the results against those obtained from experimental tests and detailed finite element analyses. The effectiveness of the proposed model for system-level analysis is also shown by modeling a multi-storey frame structure. 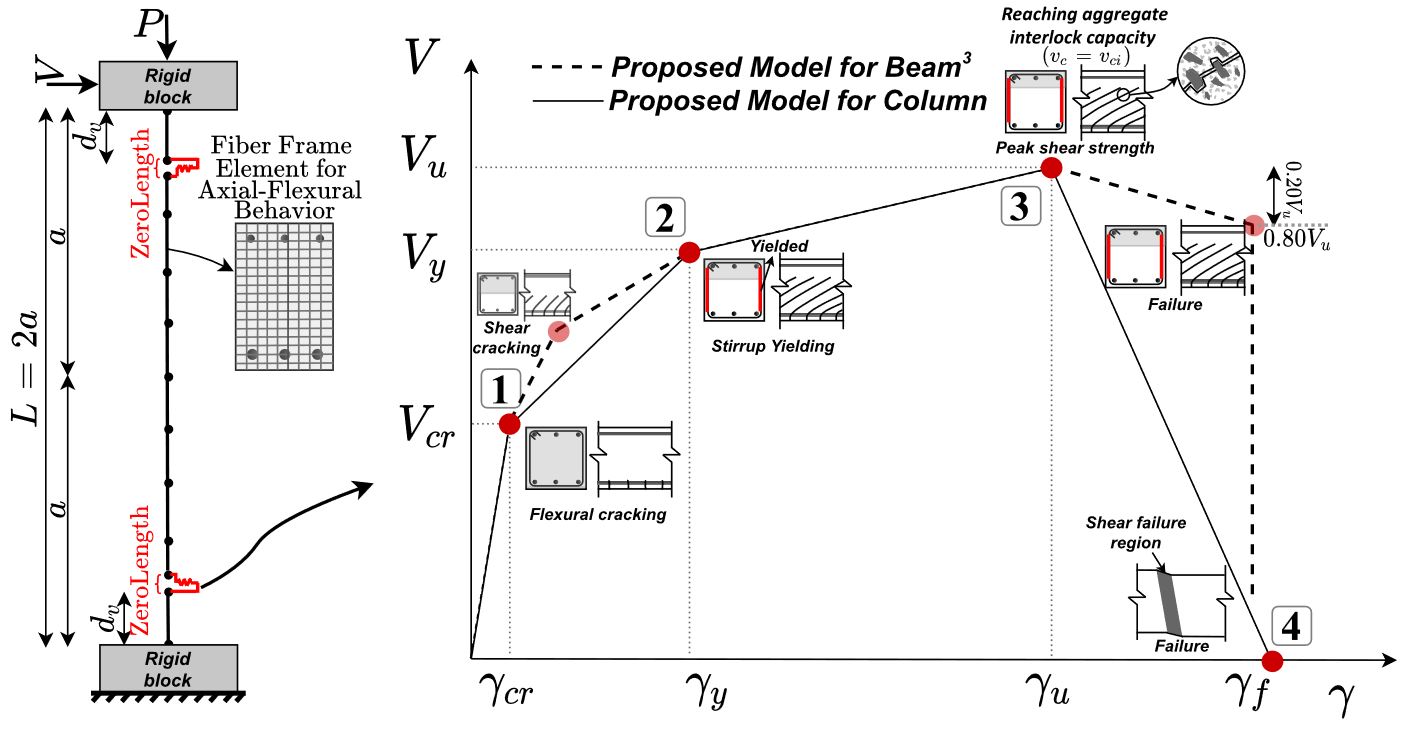 Deep members can exist in different forms in concrete structures, such as coupling beams, short columns, pile caps and corbels. As they are typically prone to shear failure, accurate calculation of the shear behavior in these members is vital. The existing analysis procedures for deep members are either computationally expensive or limited to the calculation of shear strength for design purposes. There is a great need for reliable macro-modeling analysis tools that can evaluate safety and performance of structures at the system-level while considering the nonlinear shear behavior of deep members in detail. This study presents a shear plastic hinge model developed based on the beam-arch action mechanism for nonlinear analysis of deep reinforced concrete (RC) members. The contribution of web concrete and transverse reinforcement (i.e., beam action) to the shear response is considered based on the Modified Compression Field Theory, while the contribution of the inclined concrete compression chord (i.e., arch action) is taken into account using the compatibility condition for shear deformations. The model is capable to calculate the shear force and shear deformation at different stages of the response while considering important nonlinear material effects in RC and interactions between internal force components. Through a comprehensive verification and parametric study, it is demonstrated that the model is able to accurately compute the shear behavior in deep RC beams and columns with various design variables. Lastly, the effectiveness of the proposed model for system-level analysis of structures is evaluated by modeling a multi-storey RC shear wall with coupling beams. The analysis results show that shear deformations can have a great influence on the performance of the structure as a whole in addition to the behavior at the component-level. 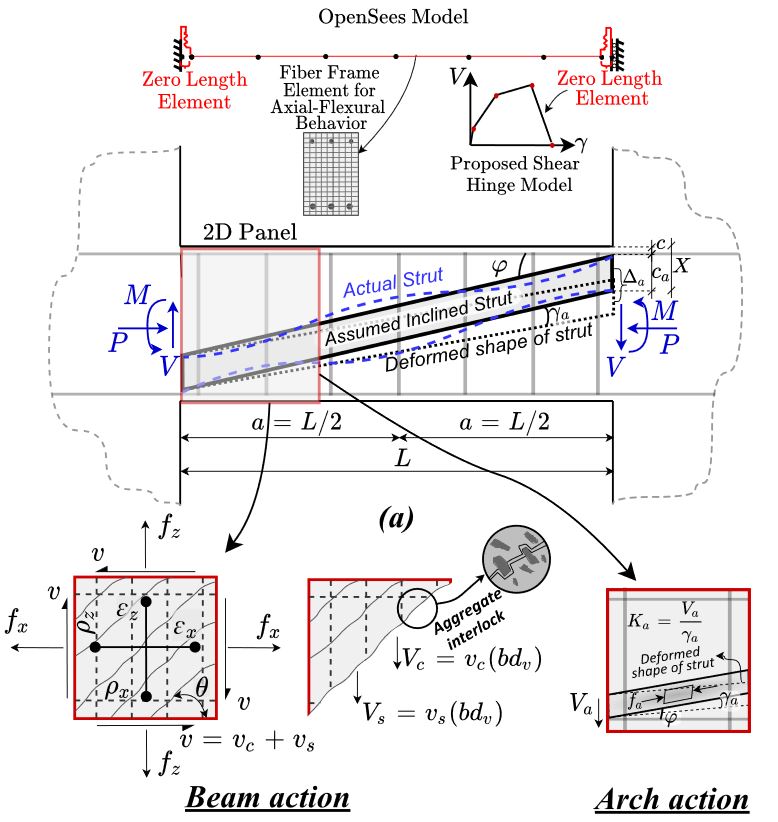 Performance assessment of critical infrastructure under blast loads is a crucial consideration in their design and safety evaluation. While the response of structural members subjected to far-field blast loading is well understood and can be reliably calculated with the available literature, the response of structural members to near-field blast loading needs more understanding and is limited in the literature. This study investigates the effects of various design parameters on the performance of reinforced concrete (RC) columns under near-field blast loads, specifically for scaled distances less than 0.4 m/kg1/3. Computational fluid dynamics analysis is performed using LS-DYNA to model the detonation process of the explosive, propagation of the blast wave, and its interaction with the structure. The numerical results are validated with experimental data reported in the literature. The validated modeling approach is used to investigate the influence of transverse reinforcement spacing, concrete cover, axial load ratio (ALR), and column cross-section shape on structural performance. It is concluded that a reduction in the transverse reinforcement spacing reduces the lateral displacement and spall length while increasing the residual axial capacity. A reduction in the concrete cover reduces spalling but has a minimal effect on the lateral displacements. Lastly, the columns fail at lower impulse values and lateral dispalcements as the ALR is increased. 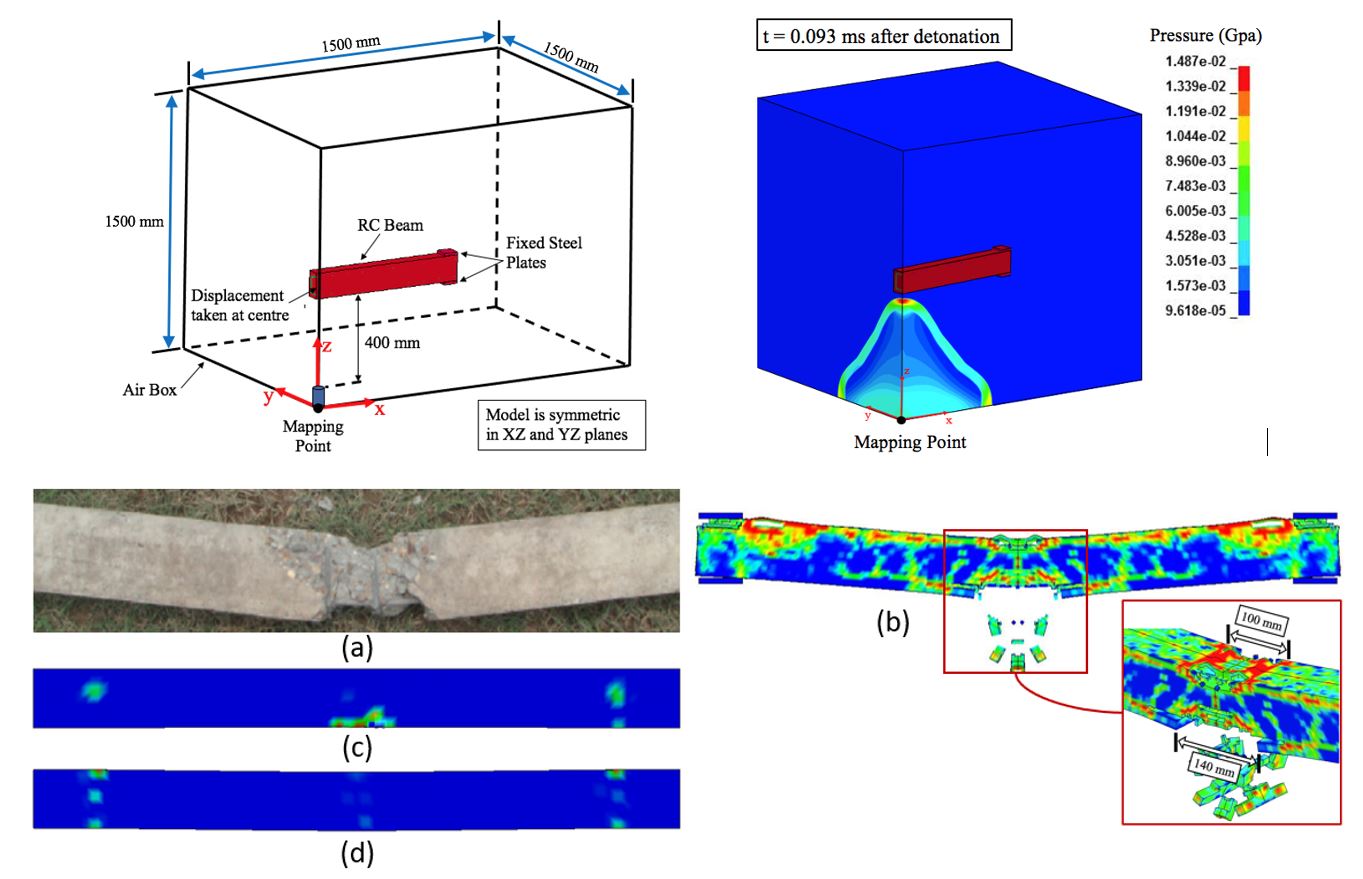 This research project first provides an overview of a series of experimental studies carried out at Carleton University over the past two decades on reinforced concrete (RC) shear walls strengthened or repaired with carbon fibre-reinforced polymer (CFRP) sheets. These studies have led to several unique contributions including the development of a novel tube anchor system, which improves the load transfer mechanism between the CFRP and RC supporting structural elements. The project then presents a new finite element modelling technique to analyze CFRP strengthened RC shear walls with the newly developed tube anchor system. Two different modelling approaches are proposed to consider the effects of the tube anchor system. Additionally, a number of other important CFRP- and RC-related mechanisms including CFRP debonding effects, tension stiffening, compression softening, and strength and stiffness degradation under cyclic loads are also considered in the model. By comparing the analytical and experimental results, it is demonstrated that the proposed modelling approach can accurately replicate the observed complex behaviour of a wide range of CFRP-strengthened shear walls without requiring detailed 3D finite element (FE) modelling of the anchor system. 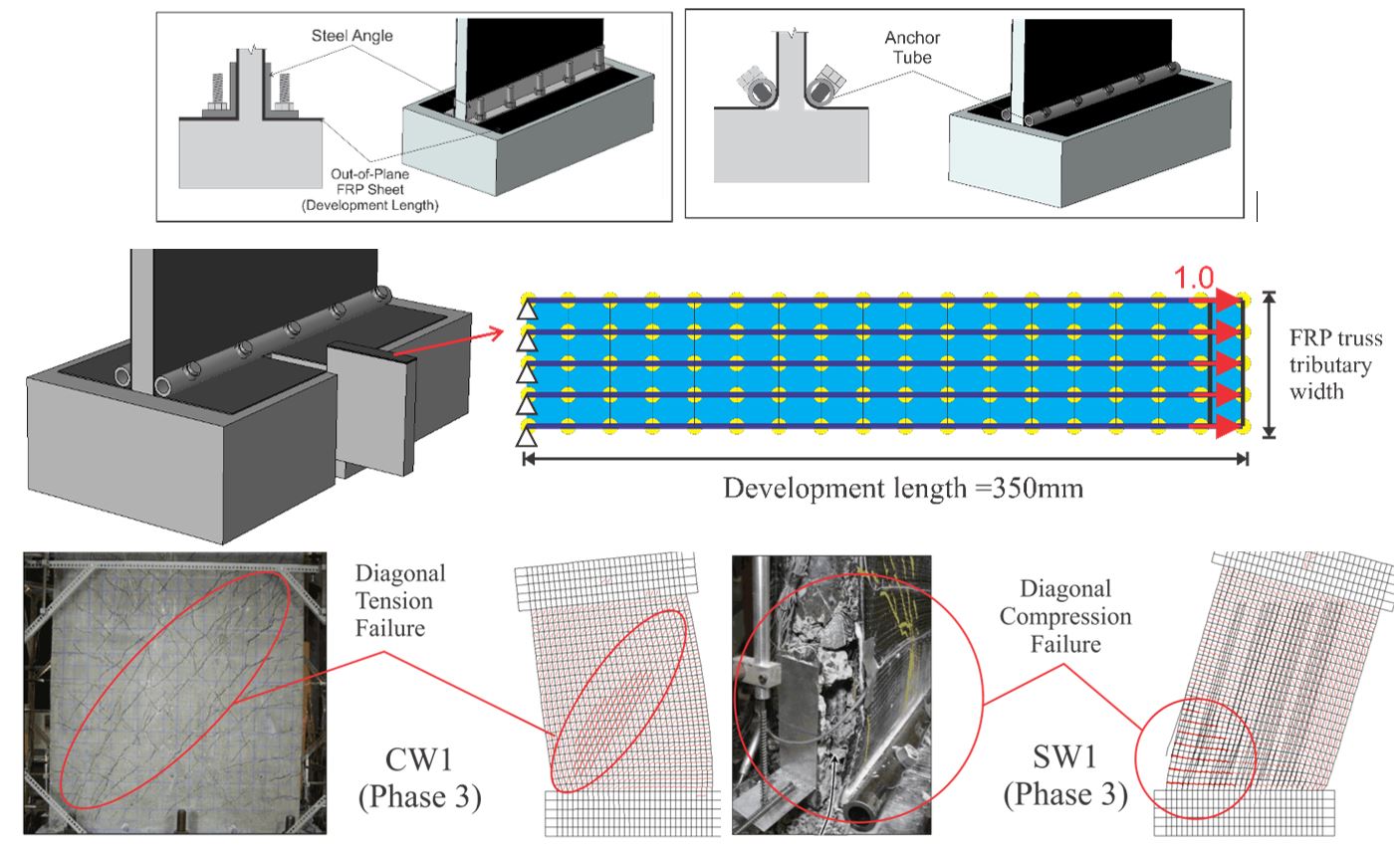