A Guide to Sustainability at Carleton University

The full guide includes a Sustainable Campus Walking Tour and a location guide to key programs and developments. The guide can be downloaded here Sustainability Guide, or is available in hard copy from the Sustainability Programs office (Room 120c, Facilities Maintenance Building). 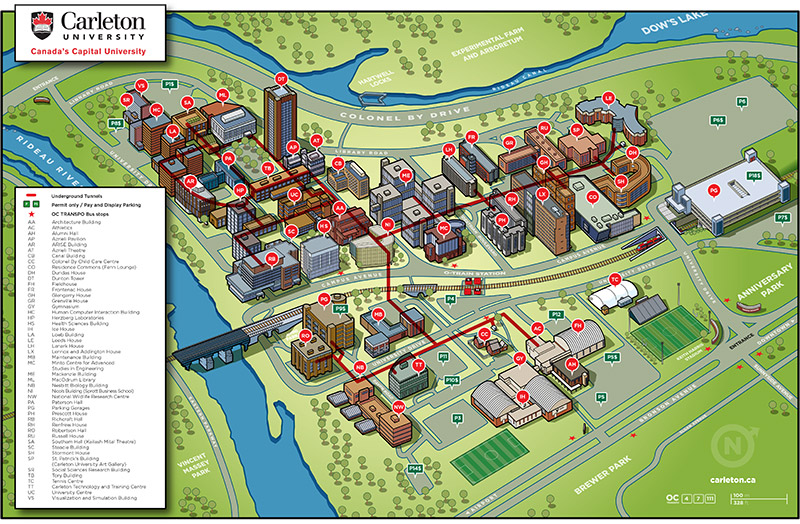 Carleton University’s approach to environmental stewardship is focused on building a sustainable campus for our community.

Richcraft Hall, previously called River Building, was constructed in 2012, is located alongside the scenic Rideau River and has been awarded a four Green Globes rating for building sustainability. The building itself features an accessible green roof with native and drought resistant planting, highly efficient passive solar lighting through the use of skylights and curtain wall systems, low-flow water-saving fixtures in washrooms and a spectacular three-story living green “bio” wall.

The Herzberg Laboratories Addition is home to the departments of Earth Sciences, Environmental Sciences, and the Integrated Science Program. The Herzberg Laboratories Addition has been awarded a four Green Globes rating for building sustainability. The Herzberg addition is at least 30 percent more efficient in energy use than the National Energy Code. Building materials with recycled content were used in the construction and chemically inert materials such as carpets and paints were used throughout.

The Canal Building is home to the Bachelor of Engineering programs in Aerospace Engineering, Architectural Conservation and Sustainability Engineering, and Sustainable and Renewable Energy Engineering. The building was awarded a 5 Green Globes Rating, the highest rating awarded. Features include a 10 kWh array of 25 rooftop solar panels, a green roof with native and drought resistant planting and an energy display screen in the foyer. The building also acts as a living lab for academic research at Carleton University.

Carleton’s new Residence Commons is at the heart of residence life. It was awarded a four Green Globes rating for building sustainability. The building includes features such as low-flow water saving fixtures, high efficiency lighting with light controls and optimal amounts of natural light penetration. In addition the building is home to an interactive energy display screen, showing live energy data. A bike share station, located near the main reception desk, is available for the Carleton community to use.

The Carleton Research and Innovation in Sustainable Energy (C-RISE) house makes use of solar thermal energy, seasonal thermal storage and provides a test bed for various innovative concepts with the aim of reducing overall energy demands. This is the newest building on campus with a sustainability focus and acts as a living lab for finding ways to reduce energy consumption in the residential sector.