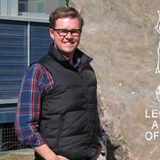 Jerald Sabin is a researcher, journalist, and publisher. He earned a doctorate in the Department of Political Science at the University of Toronto in 2016. He is a Founding Editor of Northern Public Affairs and a Research Associate with the Carleton Centre for Community Innovation. His research interests include liberal democracy, political development, Indigenous-settler relations, the voluntary and nonprofit sector, and the politics of Northern Canada. Sabin is the winner of the 2015 John McMenemy Prize for best article in the Canadian Journal of Political Science. His first book, Religion and Canadian Party Politics, co-authored with David Rayside and Paul E.J. Thomas, is forthcoming from UBC Press in Spring 2017. His second book, under contract with UBC Press, is titled Whiteness and the Settler State: Political Development in Canada’s Western Arctic. He holds degrees from the Arthur Kroeger College of Public Affairs and the School of Public Policy and Administration at Carleton University.