In October 2016 seven researchers associated with the Centre accepted the Carleton University Building Connections Award in recognition of their work as the team managing Carleton’s MA in Public History program. The Award was designed to recognize an individual or a team who has made an outstanding contribution through a history of achieving exceptional success in building relationships and connections, which have had a sustained impact both over time and across research programs. They decided to use the award to foster international connections for both the MA program and the Centre, continuing to build on the latter’s reputation for encouraging an interdisciplinary dialogue on public history and cultural memory, building bridges between faculty, graduate students, and the wider community of public historians.

The award enabled us to become an official partner of NCPH building on the already deep connections we have with NCPH through the work of research associate Jean-Pierre Morin.

We were also able to become an official partner of IFPH drawing on the experience of co-director David Dean who is a member of the IFPH Steering Committee. 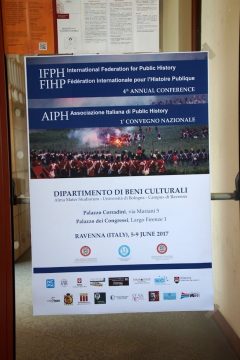 David Dean has recently been announced as the co-editor, with Dr. Andreas Etges of the Ludwig-Maximilians-Universität in Munich, of the new journal International Public History – Journal of the International Federation for Public History to be published by De Gruyter. The first issue expected in late spring 2018. The successful launch of the journal is due in no small way to the generous financial support provided by the Office of the Vice-President Research and International.

CCPH welcomes Visiting Fellows for short term visits to the nation’s capital. Last year we were privileged to host Dr. Tanya Evans, director of Macquarie University’s Centre for Applied History, a public historian who specializes in the history of the family, motherhood, poverty and sexuality and who is well known for researching ordinary people and places in the past and co-creating historical knowledge with diverse communities.