The Institute of Criminology and Criminology Justice annually sponsors and provides the opportunity for faculty and students to attend lectures given by a variety of guest speakers who focus on wide range of criminological topics. 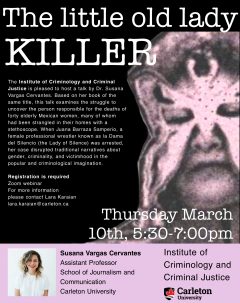 This talk examined Mexico City police’s struggle to find the person responsible for the deaths of forty elderly women, many of whom had been strangled in their homes with a stethoscope by someone posing as a government nurse. 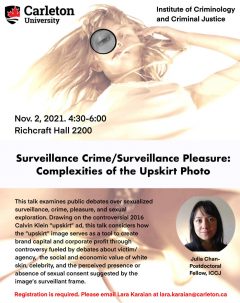 October 7, 2020: The University and Carceral State 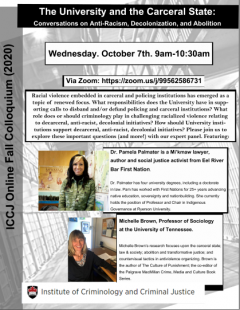 Racial violence embedded in carceral and policing institutions has emerged as a topic of renewed focus. What responsibilities does the University have in supporting calls to disband and/or defund policing and carceral institutions? What role does or should criminology play in challenging racialized violence relating to decarceral, anti-racist, decolonial initiatives? How should University institutions support decarceral, anti-racist, decolonial initiatives? Explore these important questions (and more!) with our expert panel (video recording).

An iteration of the ICCJ Colloquium series organized in 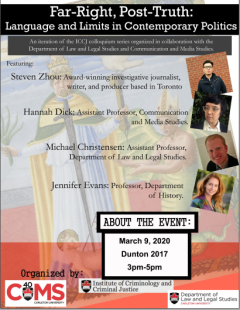 collaboration with the Departments of Law and Legal Studies and Communication and Media Studies.

Dr. Zinger will present on the topic of Human Rights, 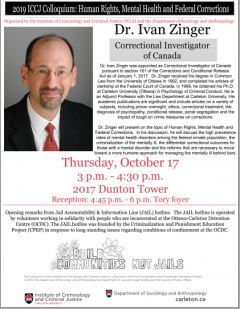 Mental Health and Federal Corrections. In his discussion, he will discuss the high prevalence rates of mental health disorders among the federal inmate population, the criminalization of the mentally ill, the differential correctional outcomes for those with a mental disorder and the reforms that are necessary to move toward a more humane approach for managing the mentally ill behind bars.

Fall colloquium of the Institute of Criminology and Criminal Justice (ICCJ) in conjunction with the Criminalization and Punishment Education Project (CPEP), the Department of Sociology and Anthropology, the Department of Law and Legal Studies, and the Faculty of Public Affairs.

April 10, 2019: Hybrid Threats and Hybrid Truth: Towards a Criminology of Dark Disorder

Amongst governments, there is a growing 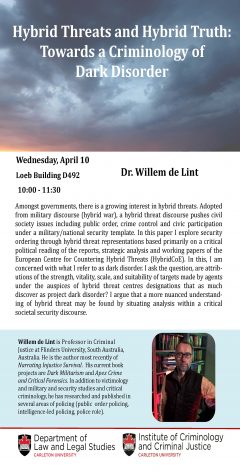 interest in hybrid threats. Adopted from military discourse (hybrid war), a hybrid threat discourse pushes civil society issues including public order, crime control and civic participation under a military/national security template. In this paper I explore security ordering through hybrid threat representations based primarily on a critical political reading of the reports, strategic analysis and working papers of the European Centre for Countering Hybrid Threats (HybridCoE). In this, I am concerned with what I refer to as dark disorder. I ask the question, are attributions of the strength, vitality, scale, and suitability of targets made by agents under the auspices of hybrid threat centres designations that as much discover as project dark disorder? I argue that a more nuanced understand-ing of hybrid threat may be found by situating analysis within a critical societal security discourse.

Derek Twyman, a Canadian citizen, was 25 years-old when he was sentenced to 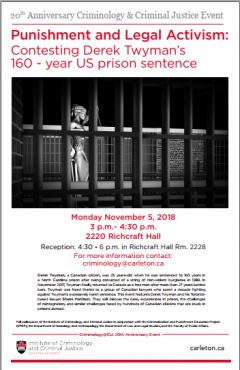 160 years in a North Carolina prison after being convicted of a string of non-violent burglaries in 1989. In November 2017, Twyman finally returned to Canada as a free man after more than 27 years behind bars. Twyman was freed thanks to a group of Canadian lawyers who spent a decade fighting against Twyman’s excessively harsh sentence. This event features Derek Twyman and his Toronto-based lawyer Shane Martinez. They will discuss the case, experiences in prison, the challenges of reintegration, and similar challenges faced by hundreds of Canadian citizens that are stuck in prisons abroad.

Fall colloquium of the Institute of Criminology and Criminal Justice in conjunction with the Criminalization and Punishment Education Project (CPEP), the Department of Sociology and Anthropology, the Department of Law and Legal Studies, and the Faculty of Public Affairs.

November 2, 2017: From Epidemic to Crisis: Contesting the Drug War Imaginary

Co-sponsored by the Institute of Criminology and Criminal Justice, 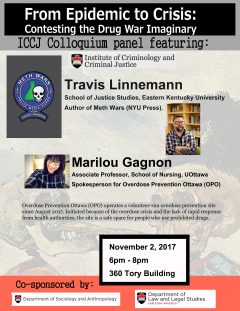 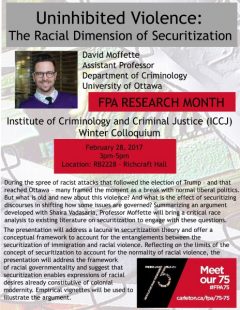 During the spree of racist attacks that followed the election of Trump – and that reached Ottawa – many framed the moment as a break with normal liberal politics. But what is old and new about this violence? And what is the effect of securitizing discourses in shifting how some issues are governed? Summarizing an argument developed with Shaira Vadasaria, Professor Moffette will bring a critical race analysis to existing literature on securitization to engage with these questions. The presentation will address a lacuna in securitization theory and offer a conceptual framework to account for the entanglements between the securitization of immigration and racial violence. Reflecting on the limits of the concept of securitization to account for the normality of racial violence, the presentation will address the framework of racial governmentality and suggest that securitization enables expressions of racial desires already constitutive of colonial modernity. Empirical vignettes will be used to illustrate the argument.