Two historical exhibits are on display in Carleton’s MacOdrum Library to celebrate the university’s 75th anniversary this year.

The exhibits are collections of archival photos and documents meticulously compiled to showcase Carleton’s history and growth from 1942 to 2017.

The first exhibit, Carleton University: 75 Years of Impact, Imagination and Innovation, focuses on Carleton’s history as a whole, including photos of faculty members, students and campus landmarks dating back to the university’s founding. The second, The Way We Were: The Carleton University Library, concentrates on MacOdrum Library’s history and evolution over seven and a half decades.

The two exhibits are the brainchild of Patti Harper, head of Carleton’s Archives and Research Collections, and Chris Trainor, the university’s corporate archivist. Harper’s goal was to showcase something tangible in the wake of Carleton’s 75th year of existence.

“We wanted to show textual material; whether it was a timetable that a student may have taken to class decades ago, whether it was a program for an event, or a poster, our goal was to showcase things that you wouldn’t see in a regular exhibit.”

Adds Trainor: “The two exhibits not only showcase Carleton’s 75th, but we were able to time it with Canada’s 150th . . . it’s something that we’ve been working on for months and we’re expecting hundreds of people to see it over the course of the summer.”

The actual assembly of artifacts was completed by Heather LeRoux, a research student in Archives and Research Collections.

“The hardest part was narrowing it down,’’ says LeRoux. “We have so much material and there are so many directions you could go. There were boxes and boxes of artifacts, and what you see in the display cases is just a fraction of what I originally pulled from storage.”

From last fall until March, LeRoux combed through the artifacts, trying to focus on what would be visually interesting and representative of Carleton’s different eras. “Some of our older newspapers, for example, are really neat. Founding minutes and correspondence from early administrations, archival photos. I wanted to show people what they wouldn’t normally get a chance to see.”

Above all, the exhibits aim to display the growth and imagination in 75 years of Carleton history, and LeRoux believes they accomplish that.

“Carleton started from a very small night school with a couple of degrees to the campus we have now…so it’s the progress that we ultimately wanted to display.” 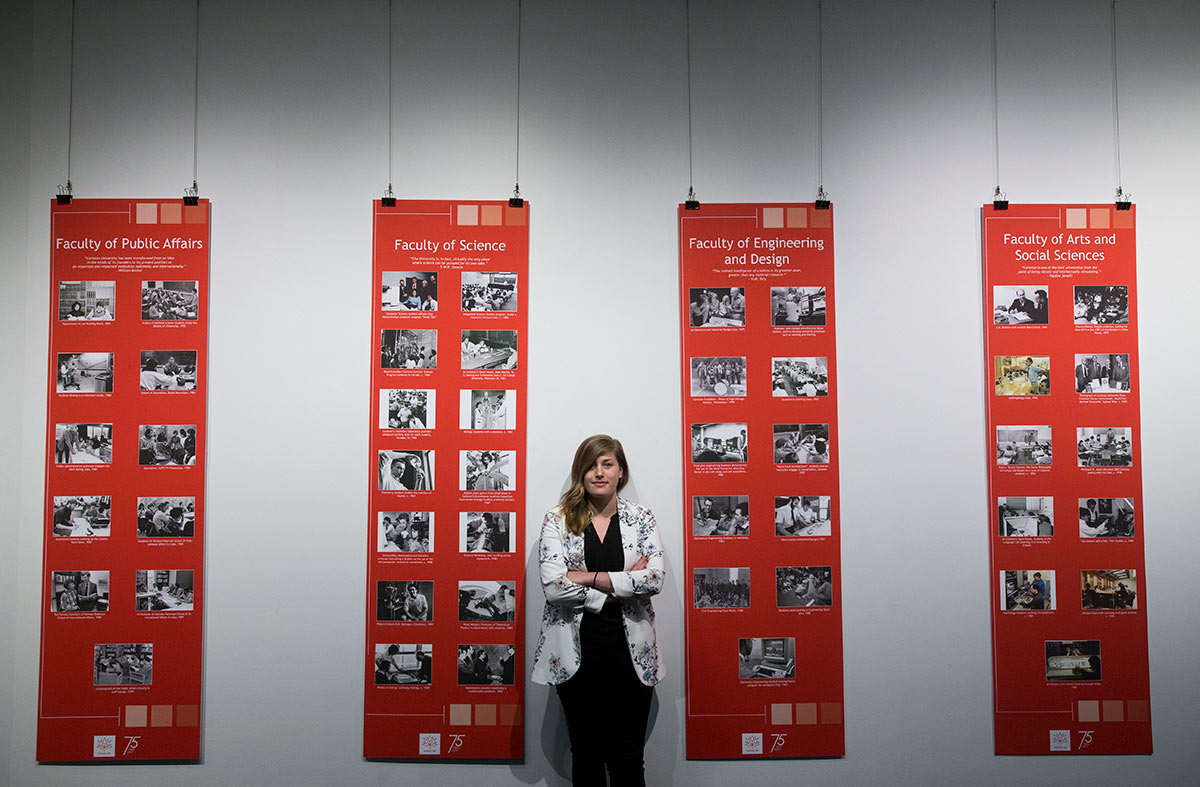