Landmark birthdays are the best time for reflection and, in its 75th year, Carleton University is looking back fondly on its formative years in the Glebe.

In 1946, a four-year-old college named after Sir Guy Carleton moved into a five-storey, red brick building at 268 First Avenue. The move was partly thanks to the efforts of Henry Marshall Tory, who in 1941 was enlisted by a committee of the Ottawa YMCA to found the college.

In his academic prime, Tory helped McGill University establish a satellite college on the west coast, which later became part of the University of British Columbia and, in 1908, he served as the first president of the University of Alberta in Edmonton. He served as president to many organizations and societies and at 77 years old, Tory was still an enterprising and resourceful administrator. Yet he was reportedly surprised when he was nominated as Carleton College’s first president in 1942.

More than 650 students enrolled in the first fall term, when courses were offered only at night in classrooms of other schools and the basements of churches, including the then High School of Commerce, now Glebe Collegiate.

Part-time students paid $20 and $30 for first-year and second-year courses, respectively, and soon Tory saw the need to prepare for growth.

In Creating Carleton: The Shaping of a University, Blair Neatby and Don McEown wrote: “The end of the war created a unique opportunity, for the federal government was planning the transition from war to peace. Almost a million service men and women had to be reintegrated into civilian life.”

The First Avenue building had been completed in 1914 as a new home for the Ottawa Ladies’ College (est. 1869) and during the war the building served as a residence for the Women’s Army Corps.

In November 1945, Tory wrote a letter to then minister of National Defence, Douglas Abbott, “describing Carleton’s eagerness to contribute to the education of the veterans, and asking the government to make the building available.”

By the summer of ’46, the college had leased a former mess hall at Lansdowne Park as they worried the move wasn’t going to happen. Luckily, they were able to secure the building for $125,000 in July and renovated it for September classes.

Under the presidency of Carleton’s second leader, Maxwell MacOdrum, three houses on First Avenue were acquired over the years to satisfy a flood of students. One caught the overflow of books and studious readers that regularly packed the college’s fourth-floor library. In 1948, a neighbouring house became the nexus of student life, taking on the Students’ Union, various clubs and the weekly student newspaper called The Carleton (renamed The Charlatan in 1971).

“Carleton College in these years clearly had a sense of community which older and better-endowed institution could only envy,” Neatby wrote in Creating Carleton. “The professors who taught at Carleton College in the early years often looked back later with nostalgia, in spite of the cramped physical conditions and the limited financial resources.”

Now a block of renovated condos, the campus at 268 First Avenue was where Carleton College came into its own. By its 10th anniversary, the Carleton College Act allowed it to grant degrees, a year later the School of Public Administration was established, and in 1955 the first master’s degree was awarded.

The college became a university in 1957. It served more than 1,500 students in a variety of programs like journalism, engineering, commerce, public administration and general arts.

In 1960, Carleton did what most 18-years-old do and got a place of its own. The university’s third president, Claude Bissell, was satisfied the move to its own campus at Sunnyside and Bronson was the right decision, although he knew there had been in the Glebe “a feeling of intimacy and community that would be difficult to recapture.”

The First Avenue campus helped Carleton become what it is today, a tightly knit community that celebrates individual freedoms. Its upbringing in the dependable family neighbourhood was truly an education.

Originally published in the April 2017 edition of the Glebe Report. 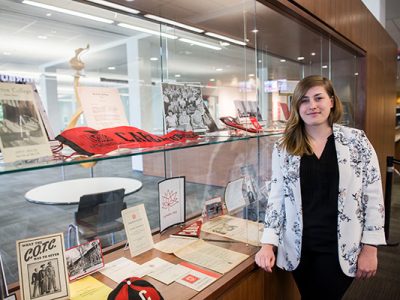 Two historical exhibits are on display in Carleton’s MacOdrum Library to celebrate the university’s 75th anniversary this year. The exhibits are collections of archival photos and documents meticulously compiled to... More