Pedro the Panda’s Long & Colourful History as a Football Icon

The Panda Game, a friendly rivalry between Ottawa’s two largest universities is at least 50 years old and has its foundations in a little stuffed panda.

Since his donation by a local jeweller in 1955, Pedro’s history as a football ambassador has been a long and colourful one. He has traveled to nine different universities across Canada as well as parts of the United States. He has been parachuted into Lansdowne Park, kidnapped and held hostage by Queen’s University’s PLO (Panda Liberation Organization), and buried in a soccer field.

In 1956, Pedro ran even for president of the Carleton Students’ Council.

He’s been formally mentioned in a debate in the House of Commons, appeared on CBC’s “Hockey Night in Canada” and transported to a game in an armoured Brinks truck.

After a long hiatus, the return of the annual Panda game has quickly grabbed the attention of the nation. Recent games, and Carleton victories, have attracted a record number of fans.

Read more about Pedro’s history at the website of Carleton’s Archive and Research Collections. And read about Carleton’s most recent Panda Game victory at GoRavens.ca. 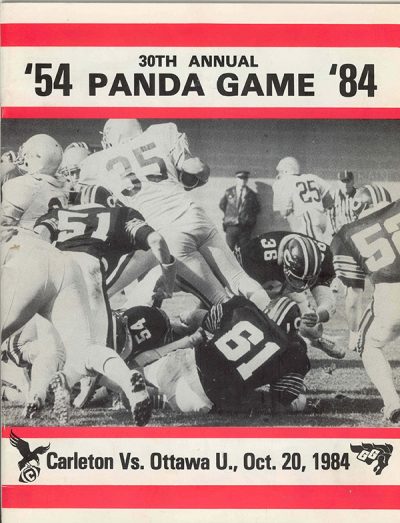