A new year brings new things: new goals, renewed hope and some resolutions. But there are also the smaller, simpler things like starting the year fresh with a brand new diary, journal or notebook and a calendar.

At Carleton, all faculty and staff receive a new calendar each year and it’s always exciting to discover what the theme will be. In years past, it has featured treasured employee recipes, fun photos of staff featuring what we do in our everyday jobs, right up to the 2016 calendar that highlighted Inuit art.

This year’s calendar celebrates Carleton’s 75th anniversary with photos of staff, faculty, students and the campus throughout the last 75 years.

This collection of 13 photos – including a cover shot – was the collaborative effort of David Townsend, Purchasing Services’s manager of marketing and communications; Allen Scott, graphic artist in The Print Shop and Patti Harper, head of Archives.

“Putting the CU75 calendar together took a month and a half,” said Townsend. “Getting a chance to look at old photos of Carleton was a very interesting exercise.” Both Townsend and Scott worked hard to ensure the photos were sorted by season as well as by era. By the time we get to the end of the calendar, the photos are more recent. The month of November features a unique faculty and staff photo arranged in the letters “C” and “U” taken during a rained-out Employee Appreciation Day in 2005.

The story behind the photos

There are interesting stories behind the selected photos.

For instance, the month of July features three students (believed to be a brother and sister and a friend) taking their canoe out of the canal. “You may not believe me, but students actually canoed to Carleton – it was a valid form of transportation to school,” shares Harper. 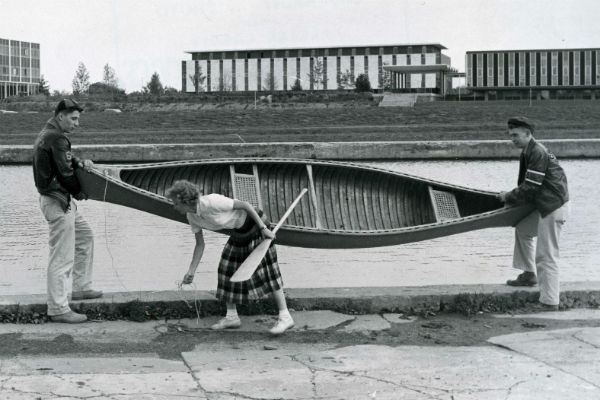 The August photo, taken in 1952 features the Carleton Band in uniform. While they may be wearing band attire, Harper points out that during this post-Second World War era, it was not unusual for students – who were also veterans – to continue wearing their military uniform as their everyday clothing. While not captured in the photo, students often wore their military-issued garters worn just above their shoe.

The September photo features a typical lecture in the Tory “Egg” theatre.  “When I host campus tours during Homecoming weekend, this room evokes the most memories for our alumni,” notes Harper. “The Egg looks the same today as it did back in 1974.”

Carleton was not always located where it is today. The January photo, featuring St. Patrick’s College in 1969, was first operated by the University of Ottawa. At that time, priests taught the Social Work program. Carleton purchased the building in 1972 and absorbed the social work program and the teaching staff from the crosstown university.

Documenting the earliest moments of the Rideau River Campus

The cover photo of the calendar documents the groundbreaking of our current location – then known as the Rideau River Campus – in 1957. While Harper is unsure of the identity of the people in the picture, they were members of the Crimson Key – a Carleton student group back then. Two years after this sod turning ceremony, Carleton University opened with its original three buildings: Paterson, Tory and MacOdrum Library. The “quad” was always a part of this space, notes Harper.

“I’m really glad we were able to put this calendar together and provide a space for these important historical photos to be featured. We can all learn from our past, and bring that sense of community to the forefront through art history,” shares Harper.